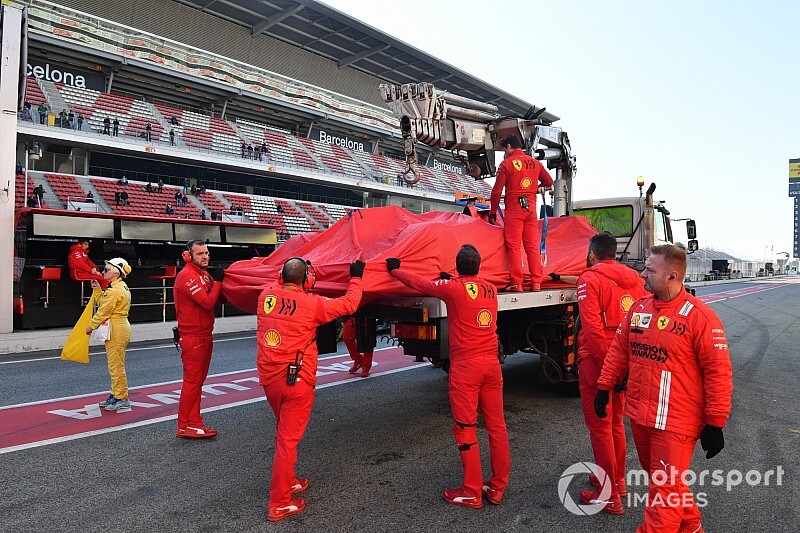 Mercedes driver Valtteri Bottas set the fastest lap of Formula 1 pre-season testing in Barcelona so far on the morning of day three, as Sebastian Vettel's Ferrari suffered an engine problem.

Vettel had managed what was then a field-high 40 laps by the time he stopped at Turn 12 just after two hours and a half of running, bringing out the second red flag of the test.

The session remained suspended for 20 minutes as the stricken SF1000 was covered in multiple blankets and transported back to pitlane, from which it wouldn't emerge until the chequered flag.

Ferrari has confirmed it will fit a replacement engine on Vettel's car for the afternoon, while the power unit that started the day will go to Maranello for analysis.

As the red flag flew, Red Bull driver Max Verstappen had sat in first lap with a C2 lap of 1m17.636s, but Bottas then improved to a 1m16.863s - the fastest lap of testing so far - shortly after green-flag running resumed.

Bottas' lap was nearly half a second quicker than Vettel's overall benchmark from 2019 pre-season testing, and was just three tenths short of the Mercedes driver's own lap record from last year's qualifying.

The Finn's lap coincided with Nicholas Latifi's Williams coming to a halt on the pit straight, which caused the test's third red-flag period. Like Vettel, Latifi did not return for the rest of the session, the pair making up the classification in ninth and 10th.

The session had resumed again with 50 minutes to go, but Bottas' time was under no threat and he duly went into the lunch break as the pace-setter, with Lewis Hamilton set to drive the W11 in the afternoon.

Renault had gone into the day with the fewest miles accrued but Esteban Ocon logged a healthy 76 laps in the morning.

He ended the session second fastest, with a time 1.370s off Bottas set on C4s, and will now hand the car over to Daniel Ricciardo for the afternoon.

Racing Point's Lance Stroll completed the top three, two tenths behind Ocon and a tenth up on AlphaTauri's Daniil Kvyat, who will be replaced by Pierre Gasly for the afternoon running.

Verstappen had spend the day focused on the harder tyre compounds, and was only fifth-fastest, albeit recording the biggest lap count at 86.

Both Verstappen and Sainz are done for the week, with Alexander Albon and Lando Norris respectively replacing them for the afternoon.

Romain Grosjean, who will hand the Haas VF-20 over to Kevin Magnussen for the final session, was eighth fastest and the only driver besides Vettel and Latifi not to make it to the 50-lap mark.