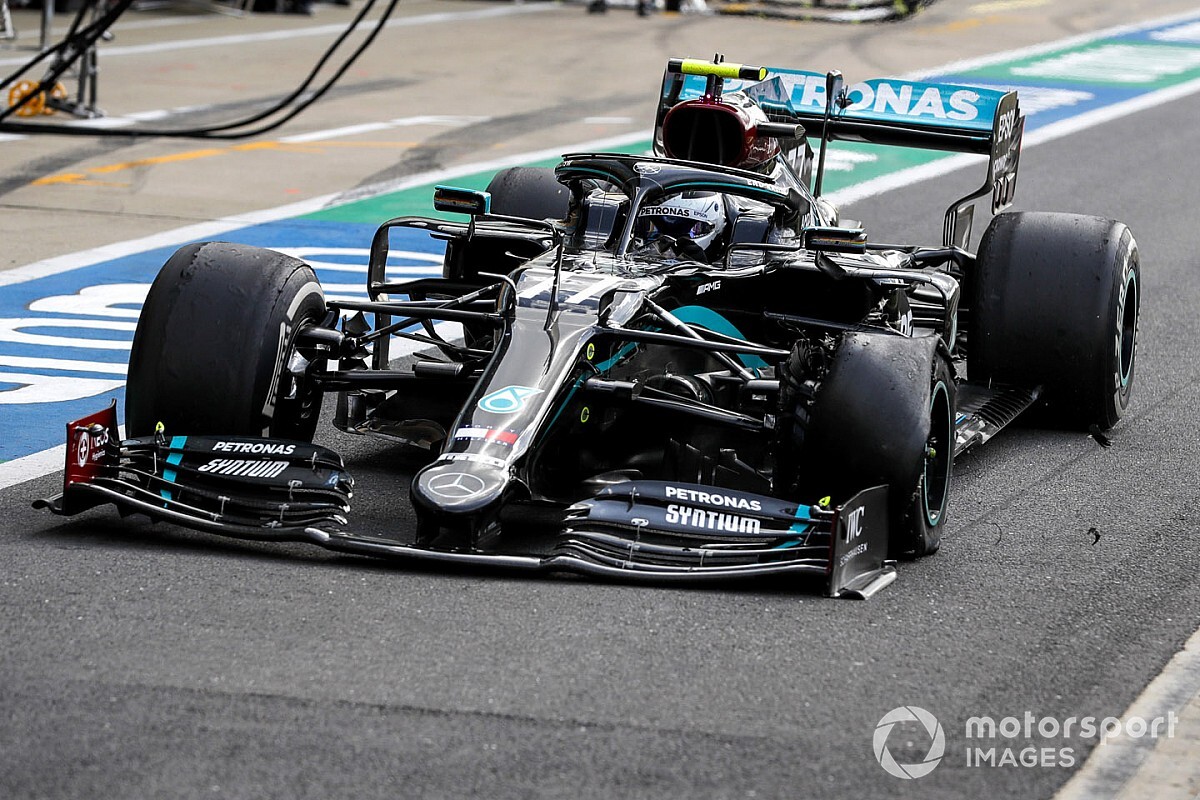 Valtteri Bottas has conceded he "can't really afford" big points losses to Lewis Hamilton in their battle for the Formula 1 world championship after failing to score at Silverstone.

Bottas was set to finish second in Sunday's British Grand Prix before suffering a front-left tyre failure with four laps to go, forcing him to crawl back to the pits.

The failure dropped Bottas outside of the points, and he was unable to pass Ferrari's Sebastian Vettel in a late scrap for for 10th, leaving him 11th at the chequered flag.

Mercedes teammate Hamilton held on to take victory despite also suffering a front-left tyre failure on the final lap of the race.

It has caused Hamilton's championship lead to swell to 30 points after only leading by five heading into the Silverstone race weekend.

Bottas acknowledged after the race that the shortened 2020 calendar meant he could not afford no-score results such as Silverstone if he wanted to take the fight to Hamilton for the drivers' title this year.

"Of course it's not ideal," Bottas said. "For the moment, if everything goes to plan with the calendar, I think there's going to be more than 10 races to go.

"But you just don't know, so obviously the best bet would be to be on top of the points all of the time. It's a big loss of points. These kinds of things, you can't really afford, but obviously it happened.

"Yes Lewis had a good race, but he also got away with it in a way. What can I do? What can I say? It's not ideal, but you can't change what has happened.

"I'll keep pushing and keep believing. You just never know what will happen."

Bottas had spent the majority of the race closely trailing Hamilton, only slipping more than two seconds behind in the closing stages when he first reported a vibration on his tyre.

The Finn put the added tyre wear down to following a car ahead for a large number of laps, but said there had been no way to anticipate such a dramatic failure.

"There's always a lot of factors when that kind of failure happens. Maybe just a small thing can trigger it at the end when it's on the limit," Bottas said.

"It's difficult to say. Overall our pace was not that dissimilar, but of course being the car behind another one means that in the corners you lose a bit of downforce. You slide a bit more, that can easily have an affect of couple of laps of tyre life.

"I was trying to manage the tyres, at the same time obviously to Lewis, because otherwise there would no chance for me to win the race. I was trying to do it in the right places at the right time, but still that happened.

"Towards the end of the stint, there was quite a bit of vibration, [which] was getting worse but not like big step. Then suddenly the puncture happened and [we] couldn't predict it."

Mercedes team principal Toto Wolff sympathised with Bottas after the incident, saying there was only 10 seconds between being alerted to a potential issue and the tyre failing.

"The drama unfolded with Valtteri coming on the radio saying 'there's something wrong with the tyre' and then 10 seconds later, we had the puncture," Wolff said.

"We saw the puncture on the sensors and at the same time, I saw where he was on track and he was exactly on the wrong side of the track.

"It was clear that it wasn't going to be a great result. I felt very sorry for him, and for the team, because it would have been 18 points more in the constructors, and 18 points for him in the driver's championship suddenly vanished."