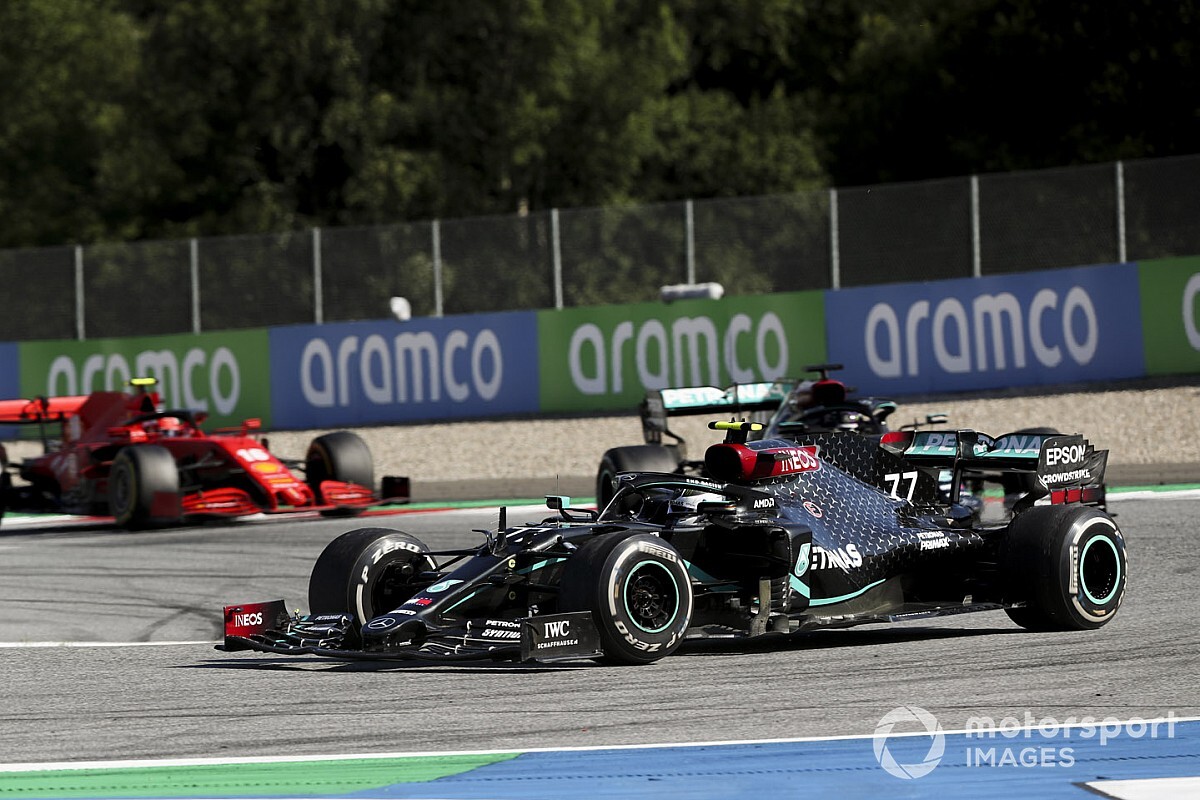 Valtteri Bottas reckons he and Lewis Hamilton will have to drive more cautiously in Formula 1's Styrian race if updates to be trialled in practice do not solve Mercedes' gearbox problems.

After Mercedes was hampered by a build-up of electrical noise – stemming from vibration caused by the Red Bull Ring's kerbs – the team explained the issue was a "complex problem" with no quick fix that would reoccur if the W11 was run in the same arrangement as the season opener.

It is understood that Mercedes will bring new parts to its 2020 challenger to try and fix the issue, as well as understand it further using additional data, which will be collected during Friday's running.

When asked by Motorsport.com if he and Hamilton will have to avoid the kerbs from the off in the Styrian GP during the pre-event press conference, Bottas said: "The team has tried to do things to fix it already for this weekend.

"But they've localised the issue. I have full trust that we're going to fix it, just when is the question.

"On Friday we are running quite a [few] sensors to try and monitor what's going on and see if the issue will reappear.

"But if it will, yes, for sure we will need to be on [the] cautious side. We obviously want to finish the race and get the full points that we can.

"But that's something we should be more wiser [about] after Friday – to see how things are. But [we] could potentially have to drive differently, we'll see."

Despite the gearbox failure threat during the latter stages of last weekend's race, Bottas held on to win the F1 season opener for the second year in succession – with Hamilton fourth after being penalised for his contact with Red Bull's Alex Albon.

Bottas has struggled to maintain momentum in a title challenge since joining Mercedes, but said his approach to the upcoming races will not change despite stealing an early advantage over his teammate.

He said: "It's still only one race done, and of course you get a positive feeling from starting the season like that and you want to carry the positive momentum and keep the confidence that you get from that.

"But in the end, work as normal. Each race weekend is an individual weekend, you again reset and start from zero.

"And you try to do things better than what you did the previous race weekend.

"You take the learnings and try to always raise the bar for each one, so I think that's the plan really for the season.

"The races will come pretty rapidly, so being efficient on the learning side and how you work with a team. This is going to be the key."