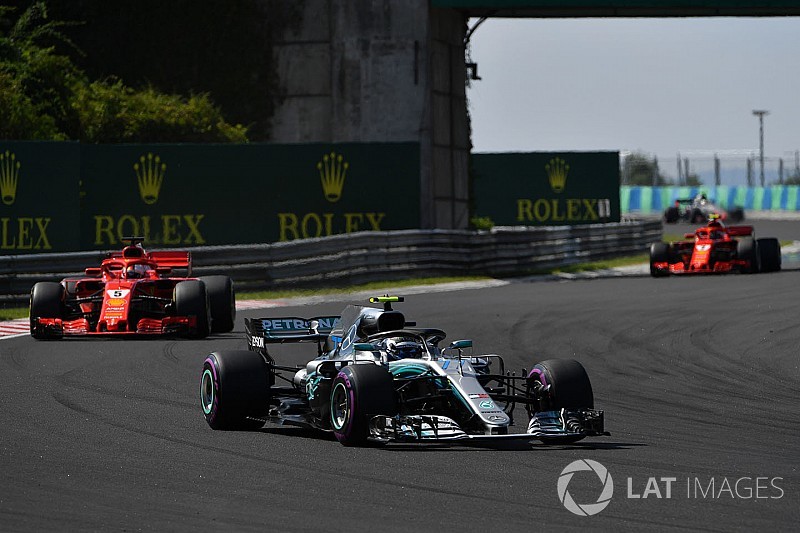 Valtteri Bottas says that he is "hurt" by comments from Mercedes boss Toto Wolf that he was a "sensational wingman" in the Hungarian Grand Prix.

The Finn was forced to play a defending role in the second half of the Hungaroring race, with teammate and race leader Lewis Hamilton's main title rival Sebastian Vettel stuck behind him.

After holding off Vettel until just a few laps before the end to ensure Hamilton was clear in front for the win, Wolff told Sky that he admired the role Bottas played.

Wolff said: "It feels a bit bittersweet, I don't know why, because Valtteri would have deserved a podium because he was such a sensational wingman."

But Bottas seemed unimpressed by those comments, as he suggested that there was little to be happy about on an afternoon he wanted to finish much higher than his eventual fifth.

"First of all wingman hurts," he told TV reporters. "Second of all, I don't see any positives in this race for me. I wanted a better result.

"We thought in theory we should have been able to do that one stop. We had to stop earlier than we wanted because of Kimi [Raikkonen], we had to cover him, and still 20 laps before the end everything was feeling okay.

"We could control the pace and my position, but then the rear tyres started to die. I tried to defend the best I could, as aggressive as I could, but it ended up being a bit of a mess in the end with the broken front wing and everything."

Bottas suggested that he would speak to team management later to discuss the "wingman" issue, as he suggested there had been no indication he was playing a supporting role to Hamilton.

"I think we need to speak after this race," he said. "We are over halfway [through] the year and the points gap is big, but for sure the team will decide at some point."

Bottas also believed that his clashes with Vettel and Daniel Ricciardo in the closing stages of the Hungarian GP were just racing incidents – even though he has been summoned to see the stewards for the Red Bull incident.

"With Seb he had a good run into Turn 2," he said. "We had a bit of a battle in Turn 1. I still had my nose inside into Turn 2, he was on the outside, he turned in very early for me and for me there was nowhere to go.

"We touched and I was the only one who got damaged. Fair enough, I think racing incident.

"With Daniel, it was a similar thing. I was more next to him on the inside. I had no front half of my wing so I was locking up as well.

"I am sure he saw that I was going quite quick into the corner but he still turned in, and then we touched."