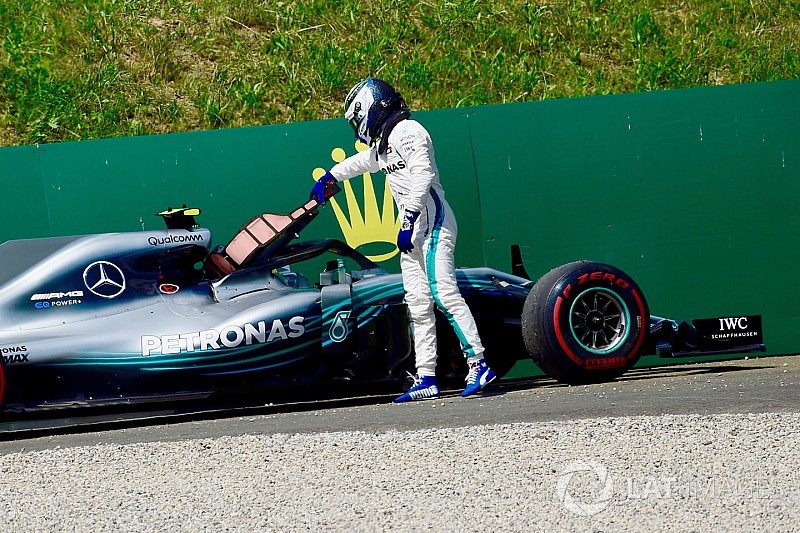 Mercedes Formula 1 driver Valtteri Bottas has taken a fresh power unit for Friday in Silverstone while the engine he used in France and Austria undergoes further checks, putting the Finn on the bubble for penalties.

Although the cause for his retirement last time out at the Red Bull Ring was a hydraulic issue, the team has some concerns that after he stopped suddenly and parked on track, heat soak issues may have caused some problems for the power unit.

There were similar worries about Lewis Hamilton’s car, after the world champion was halted by a fuel pressure problem, but his power unit has been passed fit.

However, Bottas has been given a new V6, turbo, MGU-H and MGU-K for Silverstone. In each case it’s the last one he can use before penalties kick in.

After being checked over at Brixworth, the Austria engine will be run on track on Friday in Hockenheim, before being returned to the pool for further use, assuming that it is deemed to be healthy.

A team spokesman said: “It’s a precautionary measure as PU2 suffered high temps from heat soak after retirement in Austria so might carry some risk. So he is taking a fresh one here then we will run the other one again in Hockenheim to check it properly.”

Technical director James Allison noted earlier this week that stopping a car on track always carries some risks for the power unit.

He explained: “Every time the car stops in an uncontrolled way, where a failure happens and the system is then shut down in a manner that is unusual, and the car can suffer all manner of unknown gremlins, we can’t be completely sure until we’ve done all the necessary checks to be certain that the bits of the car that are sealed, and which do attract sporting penalties, weren’t in any way affected by these uncontrolled shutdowns.”

Live: Follow practice for the British GP as it happens