Latest injury from skiing shows that not just motorsports is dangerous for the brain.

The news came out this morning that Michael Schumacher, the seven-time Formula One champion who tried to stage a comeback with Mercedes GP for three years, has crashed and fallen while skiing in the French Alps with his 14-year-old son. Schumacher was wearing a helmet at the time and was not on the French slopes alone. That’s the good news.

Schumacher initially went to a local hospital, according to Associated Press reports, then was taken to a second facility near Grenoble that specializes in ski injuries, they said. Initial reports made the injury sound serious; it has since been downgraded, our European sources say. Schumacher was skiing on an unmarked slope and reportedly hit a rock.

Of course this started a pile of tweets and Facebook posts and jokes, of course, but as we’ve learned through experience in motor racing, taking head injuries anything but seriously is a stupid thing to do. The Guardian in the UK chimed in with reports that doctors in Grenoble are “carrying out extensive tests” on the 44-year-old racer.

Schumacher’s spokesperson, Sabine Kehm produced a statement that confirmed the incident. She said no one else was involved in the fall. “Michael fell on his head when he was on a private skiing trip in the French Alps. He was taken to hospital and is receiving professional medical attention. We ask for understanding that we cannot give our continuous information about his health,” her statement read.

Head injuries are getting a lot of play in the media and today’s incident, occurring as Americans celebrate the final weekend of regular season play in the NFL – itself just beginning to pay attention to the trauma surrounding head injuries – needs to be broadcast heavily to make people aware that it can happen and that the consequences may or may not be evident at once. 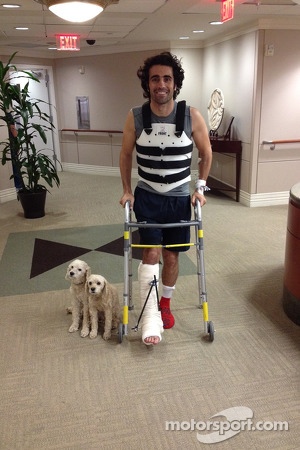 Even IndyCar Series four-time champion Dario Franchitti, who suffered a driving career-ending head injury in early October at Houston’s Reliant Park racetrack, didn’t realize how bad his hit was until much later. The three-time Indianapolis 500 winner recalled, in speaking with reporters just a couple of weeks ago, that he returned to driving just three weeks after a huge hit at Homestead-Miami Speedway in early 2000. That occurred in pre-season testing for the Champ Car series and came just a few months after Franchitti’s best friend Greg Moore died in a horrific accident at what is now Auto Club Speedway in Fontana, CA.

True, Franchitti was much younger in 2000 than he is now – Schumacher as well – but it’s highly likely that he should have taken more time to recover than he did then. Medical awareness probably wasn’t as heightened as it is these days but still, how much do we value our brains’ ability to recover from any type of hit? How much do we take it for granted that we’ll recover fully?

There’s no doubt that Michael Schumacher will consult with proper physicians before emerging from his hospital bed, just as Dario Franchitti traveled to Miami to consult with Dr Stephen Olvey, a doctor who truly understands (as well as anyone can) a racer’s difficulties in recovering from head injury. Olvey’s had way too much experience (and I’m sure he wishes he didn’t) with drivers that have suffered concussion from an accident; he recognizes symptoms way better than his subjects would, if they even realized the condition they’re in.

It is so easy to deny head injuries in racing, in football, baseball, basketball and in ice hockey, where it’s regular and rampant. That people are learning not to be dismissive of these types of injuries is a step in the right direction.

In the meantime, as we think positively toward Dario Franchitti’s continuing recovery – and he sure sounded and looked “normal” in his Indianapolis press conference – and be grateful he’s able to make jokes at Tony Kanaan’s expense, let’s hope the same occurs with Michael Schumacher. Let’s pray he makes a fully recovery from this incident and, as one Facebook poster put it, stays off the slopes for a bit.