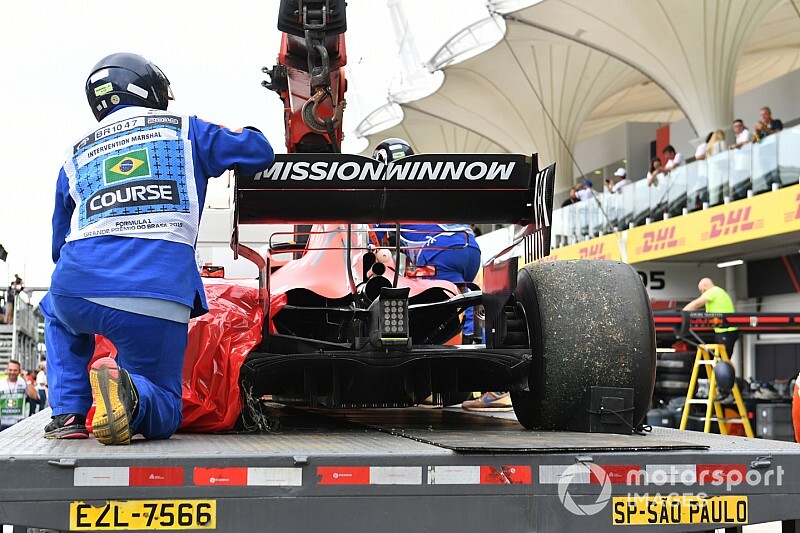 Ferrari boss Mattia Binotto says the Formula 1 team is “lucky” Sebastian Vettel and Charles Leclerc have collided this season so they can clarify what is needed for 2020.

Binotto believes his drivers have a good relationship but there have been tense moments in Vettel’s and Leclerc’s first season as teammates, although this had not resulted in an on-track clash until last Sunday’s Brazilian Grand Prix.

The Ferrari drivers crashed out towards the end of the race after Leclerc overtook Vettel and they collided when the four-time world champion attempted to get back ahead on the run down to Turn 4.

At the start of 2019 Binotto said managing Vettel and rising star Leclerc was a “luxury”, and in Brazil he said he still believes that is the case.

“I'm still convinced it's a luxury because they are both good drivers,” he said. “Very good drivers.

“They both certainly represent a boost or a benchmark for each other. We have seen them improve during the season. Seb in the second half, certainly, has been very fast.

“So I think overall, it is still a luxury. What happened, I would say it is even lucky it happened this season because at least there will be opportunities to clarify with them, in the view of next year, what we need not to happen.

“So I'm happy to take the opportunity of what happened, at least to clarify with them for the future.”

Ferrari’s double DNF in Brazil makes no difference to its championship prospects because it had already secured second in the constructors’ contest and has been comfortably beaten by Mercedes.

However, it needs to ensure the relationship between Vettel and Leclerc does not undermine its challenge next season, and any consequence from the collision will need to be administered internally as the Brazilian GP stewards determined neither driver was predominantly to blame.

That was despite footage from the camera providing a reverse view from Turn 4 clearly showed Vettel moved left, towards Leclerc, after drawing alongside.

But Binotto said it was “not a matter of managing” Vettel, who also defied a team order in Russia to let Leclerc past.

“It's a matter of recognising eventually what has been the actions and the mistakes,” said Binotto.

“And I think that whether you are a driver, you're an engineer, whatever you're doing, recognising mistakes is important, because that can only make you better.

“It's not for me to blame them. It's for them to recognise it.”

Bottas faced with threat of grid drop for Abu Dhabi