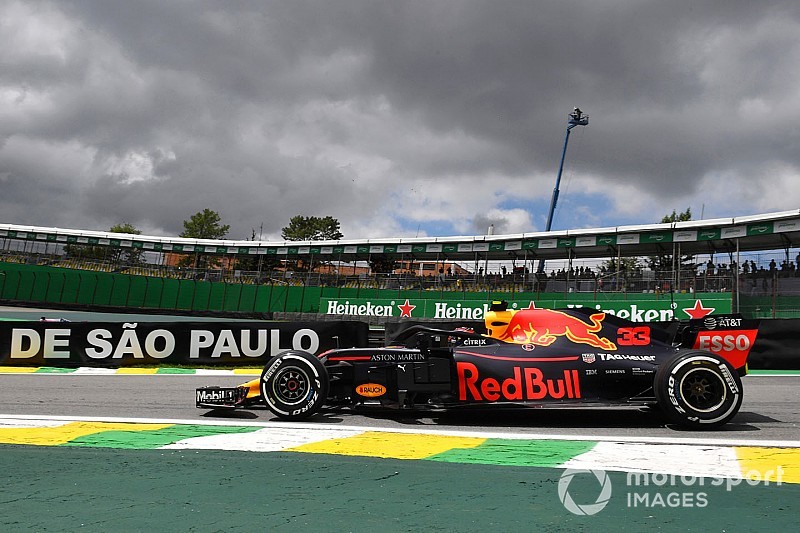 Verstappen, Sebastian Vettel and 2018 champion Lewis Hamilton were covered by less than a tenth of a second in first practice at Interlagos.

Hamilton and Verstappen set their fastest laps moments apart from one another, with the Briton initially going quickest on a 1m09.107s before Verstappen snuck ahead on a 1m09.011s.

The close fight between the three leading teams took place through the first hour of the 90-minute session, as all six of their drivers took turns at the top.

Daniel Ricciardo was first out as he looked to immediately activate a five-place grid penalty for a turbocharger change.

He also became the first big gun to set a representative time, a 1m10.139s, that was initially bettered by Ferrari's Kimi Raikkonen and then Valtteri Bottas.

Mercedes briefly interrupted Bottas's running to investigate an oil leak, and though he returned to the track before the session's end he only made a minor improvement.

That dropped him to the tail of the top six as Verstappen, Vettel and Hamilton all moved ahead of their teammates on their second sets of supersoft tyres.

Ricciardo wound up fourth quickest, 0.384s slower than his teammate, while Raikkonen was half a second of the pace in fifth having switched to (and improved on) soft tyres for the second part of the session.

Bottas trimmed three tenths of his earlier benchmark but was a further tenth adrift of his fellow Finn.

Haas led the way in the battle to be best-of-the-rest thanks to early laps after the mid-session lull from Romain Grosjean and Kevin Magnussen.

Grosjean was the last driver within a second of Verstappen's time, while Magnussen was three tenths slower than his teammate.

Three regular drivers stepped aside in FP1: Marcus Ericsson was replaced by Antonio Giovinazzi at Sauber, Fernando Alonso gave his McLaren to Lando Norris and Sergio Perez was sidelined so Nicholas Latifi could drive for Force India.

Giovinazzi was the quickest of the trio. The 2019 Sauber driver set the 13th-fastest time, three tenths adrift of teammate Leclerc.

Norris outpaced Vandoorne with the 16th-best lap, while Latifi was the slowest of the 20 runners and over a second slower than Ocon.