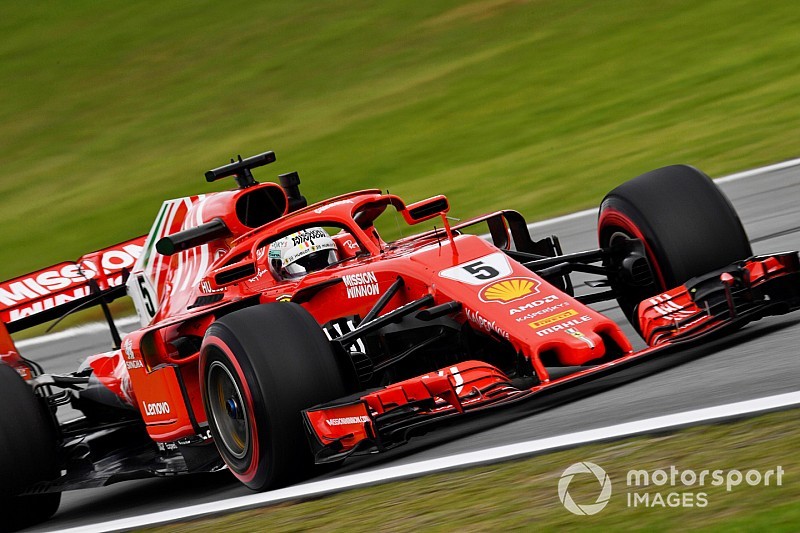 The Ferrari pairing made the early running on the Pirelli supersofts - Vettel fastest of all with a 1m08.857s - but there was little appetite among Ferrari's rivals to emerge from their garages straight away.

A quarter of the session elapsed before the Mercedes of Hamilton and Valtteri Bottas hit the track, and Hamilton was instructed to abort his practice start and return to the pits straight away.

The world champion remained in the garage with the engine cover off for a further 15 minutes while the mechanics traced the problem to a dislodged breather pipe.

When he got under way again he was instantly on the pace, clocking a 1m09.098s on the supersofts.

After a sunny and warm start to the day, the clouds had rolled in ahead of FP3 so while the air was less chilly than it had been on Friday, the track temperatures were only slightly higher than in the first two practice sessions at 33C.

Vettel's early flier remained the benchmark until he surpassed it with a 1m07.948s 40 minutes into the session, half a second up on Bottas's best of 1m08.465s, and a new lap record.

Hamilton took advantage of a brief lull in track activity to punch in a lap just 0.217s shy of Vettel's time, but while he was fastest of all in the second sector he reported that his tyre pressures weren't quite right.

Despite attempting another run, Hamilton failed to improve and had to settle for second, three tenths of a second ahead of teammate Bottas, who edged the other Ferrari of Kimi Raikkonen into fourth place by scarcely three hundredths.

The Red Bulls were the last to run, waiting until the half-way mark before leaving their garages, and each made just two flying laps over the course of one run on supersofts before parking up once more.

Daniel Ricciardo and Max Verstappen slotted in behind the leading group and over a second adrift of Vettel's pace, both complaining of problematic understeer.

Verstappen eventually got the better of Ricciardo in their internecine struggle, but his best time of 1m08.733s on supersofts was still 0.785s off Vettel.

The Saubers of Charles Leclerc and Marcus Ericsson were initially fourth and fifth until they were displaced by the Red Bulls, and Leclerc's hopes of improving his time were briefly thwarted when he was instructed to return to the pits so that the team could investigate a technical issue.

Leclerc hit the road again with 10 minutes to go and found more pace, but it wasn't enough to earn the 'best of the rest' spot as the Haas duo of Kevin Magnussen and Romain Grosjean, and the Toro Rosso of Pierre Gasly, slotted in ahead, leaving Leclerc to round out the top 10.