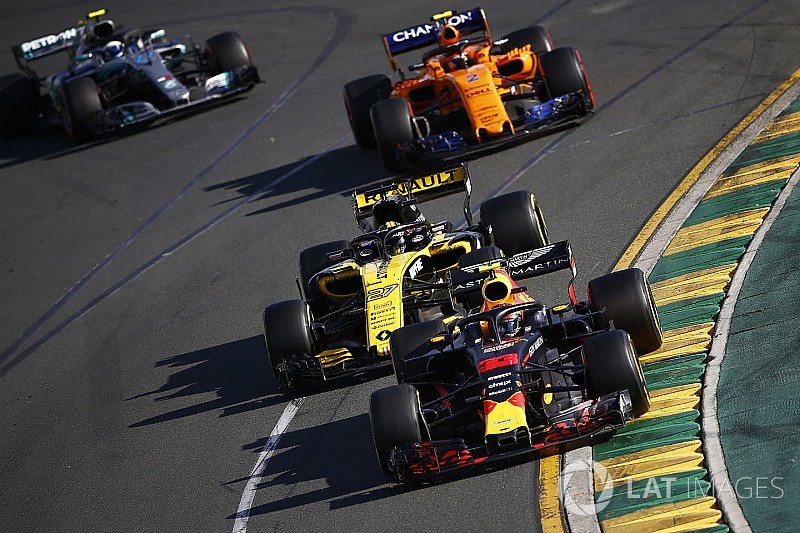 The Albert Park layout should be reviewed in a bid to help create more overtaking opportunities, according to Red Bull boss Christian Horner.

Sunday's Australian Grand Prix produced just a handful of genuine overtakes, arguably the most spectacular of which came from Red Bull driver Daniel Ricciardo on Renault's Nico Hulkenberg early in the race.

Conversely, Ricciardo's teammate Max Verstappen was bottled up behind Kevin Magnussen early on, before getting stuck in a train of cars led by Fernando Alonso after the restart.

The frustrating afternoon for the Dutchman left his team boss Horner pondering whether the notoriously single-lane Albert Park circuit needs to be readjusted.

“It should be looked at here to see if there’s a simple solution like creating a bigger braking zone, maybe tighten Turn 1 up, something like that, so that there’s a proper braking zone because the braking areas are too short," said Horner. "Especially with the speed the cars are capable of now.”

Verstappen added that even with a huge speed advantage, a combination of the high-downforce regulations and the Albert Park layout makes overtaking near impossible.

"You try, but it doesn’t make any difference," he said. "Even if you are one and a half second faster, it’s still not possible to overtake."

The Australian Grand Prix Corporation is familiar with the concept of changing the Albert Park layout, having last year undergone an investigation into replacing the fast Turn 11/12 with a tight left-hand 'stop' corner at the end of a lengthened back straight.

While the plan was ultimately shelved, FIA F1 race director Charlie Whiting hinted on Sunday that it might need to be revisited.

“We have discussed some changes to the track layout here with the AGPC," he said. "There is a project that could be realised, but I’m not sure where they are with that. It was an idea that I gave them a couple of years ago.

"It would be relatively easy, but you mustn’t forget that this is a park with public road, so it’s not quite as easy as race track.”

AGPC boss Andrew Westacott said that no formal conversations had taken place over the Australian GP weekend, but that his organisation was open to discussing changes with Formula 1 management and the FIA.

"My take on that is that I haven't had any conversation with Christian [Horner] or the FIA or Formula 1 about it, but what I would also say is that the investigation didn't produce anything conclusive that was going to lead to a marked change in overtaking on the circuit," he told Motorsport.com.

"If there are some thoughts that others have got, people astute in racing like Ross Brawn and Charlie Whiting, then, like everything, we'll collaboratively talk about it with them and see whether it's worthwhile pursuing or reviewing further."

A more likely alteration to the current track is a full re-surfacing, something the AGPC is understood to have earmarked as a short-to-mid-term project.

"[Resurfacing] is still on the cards," added Westacott. "We had some discussions talking about asphalt and the lay down of it. We're in a position to do it if and when required.

"The other thing to consider is, unlike a circuit where you can eat into sections of that land, the fact is we've got a lake on one side of the road, and we've got buildings and parkland including sporting ovals that have been here for 60 years on the other side. So I think any change is going to be subtle.

"We're not even contemplating change at the moment. But we're happy to discuss it with those world experts to see how we can improve the show if required."

How F1's emperor fell from power