Mercedes: We ran old engines as hard as possible in Montreal 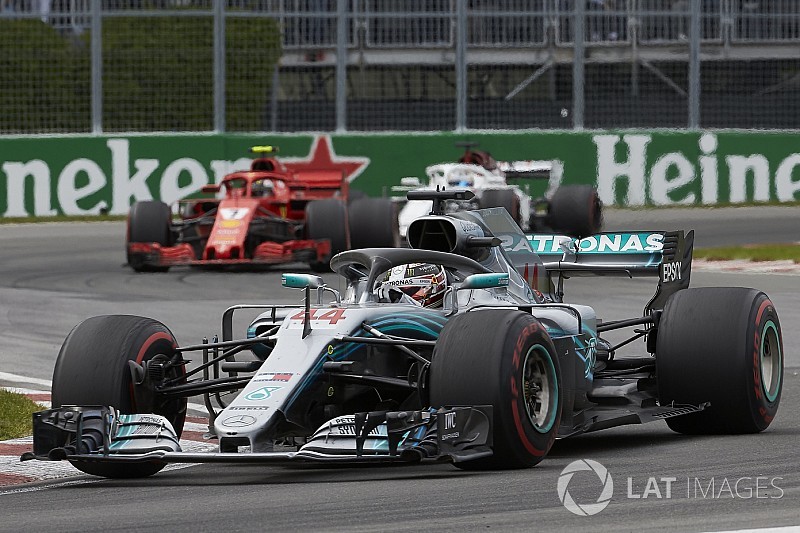 Mercedes says that Valtteri Bottas and Lewis Hamilton ran their power units as hard in the Canadian Grand Prix as they did at the start of their seven-race cycle back in Australia, despite obvious concerns over reliability.

Mercedes was the only manufacturer to have run the same engines in its works and customer cars for the whole of 2018 thus far, after plans for the introduction of an upgrade for Canada were postponed due to reliability issues on the dyno.

That meant that the engines had to do their seventh race in Montreal – a track where power counts and engines have to work hard – when the original intention was to bring them back for Hungary, where they would be less stressed.

However, chief strategist James Vowles says that made no difference to how hard the drivers were able to push them.

“The engine itself, [across] 21 races, just split it in three and each one has to do seven races, near enough,” Vowles said in a Mercedes video clip. “All six power units, that’s across Force India, Williams and ourselves, made it to the end of that sequence without any significant issues. So we’re a third of the way through that season on the first power unit, and that in itself is an incredible achievement.

“In terms of what happened in the race with Valtteri and Lewis, both of them drove the power unit as they did in the first race, there was no additional management, no additional switches, or modes or turn-downs, we were effectively using the power unit to its full benefit.

“What happened with Lewis was an entirely unrelated chassis cooling event, nothing to do with the engine itself. And you saw with Valtteri he was able to use it with good effect, second in qualifying and maintaining that second in the race.”

Vowles says Hamilton did a good job of dealing with soaring temperatures in the opening stint.

“We had on the chassis side a cooling issue that appeared very, very early on in the race, it appeared during the safety car,” he admitted. “And what it meant was the power unit was becoming very, very warm.

“We tried a number of counter measures, both through switch changes that Lewis was able to complete for us, and through driving style, so Lewis was really adapting to the situation as best he could, to stabilise and keep the temperatures under control.

“He was around two seconds behind Max [Verstappen], he wasn’t tucked up behind him. We were getting a reasonable amount of clean air into the radiators.

“Lewis did a good job, and we were able to get somewhere reasonable in the first stint of the race, but we were still too warm.”

Vowles says that the change made in the pits – which saw two mechanics adjust the cooling inlet louvres on either side of the cockpit – worked perfectly.

“During the first pitstop we came in and we made an adjustment to try to alleviate and relieve the situation as much as possible,”he added. “We knew that we had various elements in our cooling configuration that are removable. During a pit stop we can make a change. There are two losses here, the first is that during a pit stop itself you’re asking the guys to do a fairly complex job in a short space of time. Remember, the pit stop really only lasts around 2.0-2.2s.

“The second is that the car, as it goes back on track again, is in a slightly different aerodynamic configuration, simply because panels that were there have been removed.

“The pitstop itself, how much slower was it? Actually the effect was largely negligible. It was a few milliseconds, and up to a tenth really. The guys did a fantastic job, and by the time the guns came back on to put the wheels back on again they were removing their hands from the car.

“How much slower was the car out on track? The reality behind that was it was a matter of a few milliseconds from what we did with the cooling change, but more importantly, it gave us the ability to use more of the power unit performance and gave Lewis a car that now wasn’t struggling like it was in first stint of the race, so he could now go back and attack others. And that performance benefit outweighs anything that happened on the cooling side.

“As Lewis went back out it was a little bit more comfortable, and you saw later on in the race he was able to bring the fight to [Daniel] Ricciardo. Just unfortunately the damage was done far too early in terms of his race performance, which just meant fifth was all we could get from him on the day.”