Ferrari driver Sebastian Vettel set the pace in the final Formula 1 practice session ahead of qualifying for the Canadian Grand Prix. 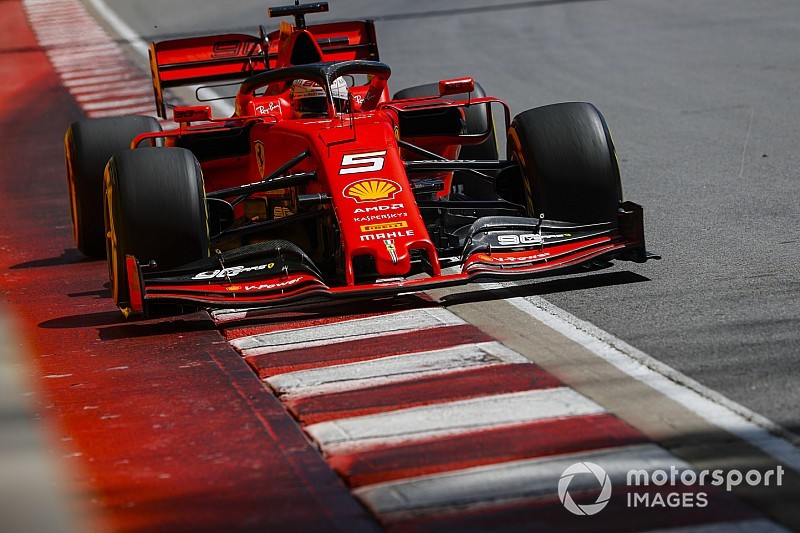 Vettel was left downbeat on Friday despite completing a one-two for Ferrari behind teammate Charles Leclerc, as he feared that was not representative of his team's real pace compared to rival Mercedes.

However, Ferrari remained on top in FP3 as Vettel moved to the head of the times, outpacing Leclerc by 0.139s.

Lewis Hamilton ended up best of the Mercedes, 0.393s off the pace, with Red Bull's performance still unknown after Max Verstappen had his best lap ruined when he caught the championship leader entering the final chicane.

Vettel was quickest after the initial round of qualifying simulations on a 1m11.557s, which gave him a tiny 0.039s margin over Leclerc.

At this stage the Mercedes drivers were three tenths off the pace, but Valtteri Bottas leapt to the head of the times when he kicked off the final bout of new-tyre runs with 20 minutes remaining.

Bottas only just eclipsed the two Ferrari drivers with a 1m11.531s, and Vettel quickly moved back ahead but only by 0.06s.

That allowed Leclerc to scorch to the head of the times with a much bigger improvement to a 1m11.058s, as Hamilton aborted his first flying lap on new tyres.

Vettel made a marginal gain on his second flier, which allowed Hamilton to briefly split the Ferraris with a 1m11.236s after a cool-down lap.

Leclerc became the first driver to break the 1m11s barrier on a 1m10.982s but Vettel ended a slightly scruffy run with a blistering 1m10.843s, including the fastest first sector of anyone, to steal top spot from his young teammate.

Hamilton and Bottas each failed to improve on subsequent runs and wound up several tenths off the pace.

Bottas would likely have been beaten to the fourth-fastest time had Verstappen been able to complete his personal-best effort.

The Red Bull driver was only 0.1s down on Vettel's session benchmark after the first two sectors but encountered Hamilton in the final part of the circuit as the Mercedes was beginning its flying lap.

That left Verstappen 0.999s adrift but still fractionally ahead of teammate Pierre Gasly, who was around half a second slower than Verstappen through the first two sectors on his best lap.

Renault's Daniel Ricciardo occupied the best-of-the-rest spot behind his former employer, edging the McLaren of Lando Norris for seventh.

Perez's teammate and local driver Lance Stroll failed to set a time after a fiery end to his session.

Stroll was completing his installation lap when his Mercedes-engined Racing Point spat out a fireball entering the pitlane.

He was rolled back into the garage, where the car emitted another small lick of flame, and did not hit the track again.