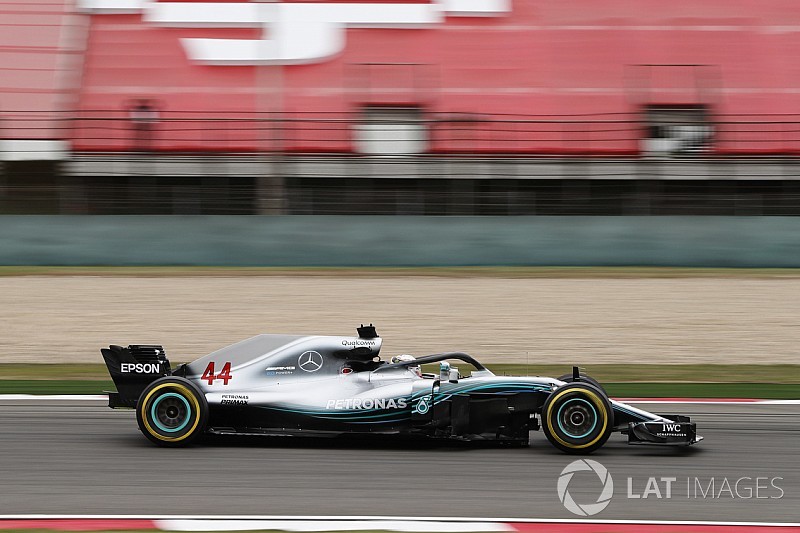 Raikkonen set the pace on the first runs in the session on soft Pirellis, just over a tenth-of-a-second ahead of Hamilton.

The Mercedes driver then became the first frontrunner to complete a qualifying simulation on ultrasofts to go top with just over an hour of the 90-minute session remaining.

Hamilton, who had a brief off during his first run after locking up while going past Esteban Ocon's Force India and another late in the session when back on softs, set his best session time of 1m33.482s despite an oversteery moment in the final corner.

Raikkonen was the last of the frontrunners to bolt on ultrasofts, ending up seven 0.007s slower and relegating the second Mercedes of Valtteri Bottas to third place by just 0.033s.

The Ferrari driver looked to have the pace to take top spot but had to go around the Sauber of Marcus Ericsson into Turn 11, which potentially cost him enough to make the difference between first and second.

Sebastian Vettel, in the second Ferrari, was fourth with the top four drivers covered by just 0.108s.

Red Bull driver Max Verstappen was 0.341s off the pace in fifth place, while teammate Daniel Ricciardo struggled to ninth, 1.075s down having complained about the throttle pedal map and brakes during the session.

Renault's Nico Hulkenberg was best of the rest in sixth place having been as high as third early in the qualifying simulations.

He lapped 0.145s fastest than Haas driver Kevin Magnussen, with the second Renault of Carlos Sainz ending up eighth.

Fernando Alonso was 10th fastest for McLaren, 1.150s off the pace, having benefitted from a tow from teammate Stoffel Vandoorne, who was on an in-lap, on the long back straight.

Vandoorne's session came to an early end with just under 15 minutes remaining when he stopped on track with a loose wheel.

Romain Grosjean had a spin onto the runoff at Turn 11 on his performance run, ending up 18th fastest behind the Saubers of Marcus Ericsson and Charles Leclerc.

Lance Stroll was slowest having also spun on his qualifying simulation at the Turn 8 right hander, saying "I just lost the rear" over the radio.

Light rain feel in the closing stages of the session, although this was far too late to have any impact on the overall order, with Alonso, Hartley, Gasly, Perez, Ocon and Ericsson all briefly taking to the track on intermediate rubber.

Ericsson suffered a spin at the hairpin in the final minute, complaining about the brake map over the radio.