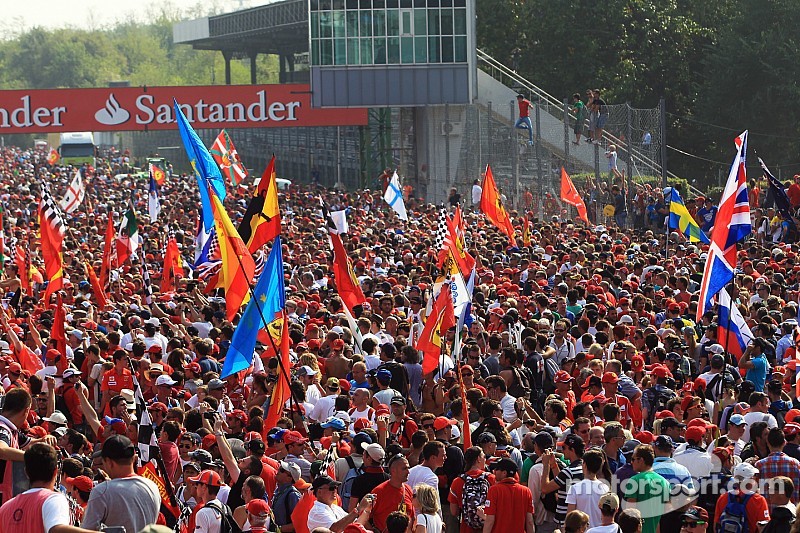 Here's a look back through some of the more infamous track invasion incidents.

With so many people in the world, there's always going to be a contingent that have a few wires that aren't connected properly up there. Sometimes, said people make it to race tracks and beyond that, they occasionally make it onto the racing surface itself.

We saw that very situation Friday during FP2 for the Chinese GP as a fan ran between a speeding Sauber and Force India on the front stretch. He then scaled the pit wall and made it to the Ferrari pits, requesting to drive the car before he was promptly arrested.

This is rare in Formula One, but not unprecedented. We all remember Neil Horan (unfortunately), the laicized Irish priest who made it onto the track during the 2003 running of British GP at Silverstone. The kilt-wearing and banner-waving looney is usually mentioned in the same breath as the disgruntled ex-Mercedes employee who appeared on track during the 2000 German GP in some kind of misguided form of protest.

These three infamous moments in F1 history do not stand alone though. When it comes to bizarre fan-on-track incidents, NASCAR has had its fair share of moments as recently as last year.

During the Richmond race last September, a drunk fan claiming it was his birthday decided to put Brad Keselowski's domination of the race on hold as he managed to climb to the very top of the curved catch-fencing, hovering over the racing surface as cars raced under the shirtless fan.

As cars sat motionless during the 2007 running of Watkins Glen after an accident, another shirtless fan decided it would be a prudent time to head out to Matt Kenseth's car, reach inside the side window and ask for an autograph.

Although we can't confirm the shirt situation on this one, a buzzed fan bolted across the track during the 1993 Pocono event, disapearing into the woods as Davey Allison and Kyle Petty roared by. Just this past month at Sebring, people at the track told me they witnessed a fan run across the live track when no cars were in sight.

In my opinion though, the craziest fan-on-track moment can only be labeled to one guy who in an ill-fated attempt to join the race before it even began, stole the pace car for the 1986 Winston 500 at Talladega. Yes, he stole the pace car. A police chase ensued around the mammoth circuit and ended with a road block being set up and the drunk fan dragged away by state troopers.

Rally fans are known to be on the track, well, most of the time to begin with. However, they usually realize where they are standing, unlike this one seemingly clueless spectator.

After a spectacular performance by Maximum Destruction, one of the most successful and popular Monster trucks in history, one fan got a little too hyped up this past January. The video explains where words would not do justice, so just take a look.

Although this doesn't constitute as a 'fan,' this incredibly miss-timed track crossing blunder sent a track marshall flying and Sebastien Buemi ducking during a Red Bull show.