AUSTIN, Texas (Sept. 25, 2012) – Circuit of The Americas today announced that it has been declared ready to host the 2012 FORMULA 1 UNITED STATES GRAND PRIX™ by Charlie Whiting, who directs racing, safety and technical matters for the Fédération Internationale de l’Automobile (FIA), the sanctioning body that oversees international motorsport. Whiting visited the Central Texas sports and entertainment venue as part of a scheduled pre-race inspection and approved the circuit for “Grade 1” status, which is the highest distinction awarded to a motorsports venue. The passing grade clears the way for the circuit to conduct Formula 1 racing this fall.

There are 3-4 corners that are very likely to see overtaking.

Whiting’s visit comes approximately two months before Formula 1 racing is set to return to the United States, Nov. 16-18. All Formula 1 circuits must be inspected and approved by Whiting before they can conduct Grand Prix racing, and the motorsports veteran spent approximately two hours touring the Austin facility along with representatives of Circuit of The Americas, general contractor Austin Commercial and German track architects Tilke GmbH. Whiting had rave reviews for the entire venue and the work completed since his last visit to the circuit in August 2012.

“Everything that I’ve seen so far has been absolutely first class, and the progress that’s been made since the last time that I was here is amazing,” Whiting said. “The guys have done an awesome job--it really is quite fantastic! It’s built to the highest quality, exactly as we expected, and I’ve got absolutely no complaints whatsoever.”

During his visit, Whiting inspected the now fully paved racing circuit and personally walked the 3.4-mile course to ensure the asphalt met FIA requirements. He inspected kerbing, guard rails, fencing and other safety measures that have been installed around the circuit. He also toured the pit/paddock building, which will house Race Control and serve as his base of operations during the Formula 1™ event. Whiting described the circuit’s permanent structures as “fantastic,” and said he was especially impressed with the design of the circuit’s turns, including its signature Turn 1. 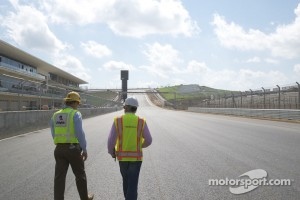 “There are 3-4 corners that are very likely to see overtaking,” Whiting remarked. “If you look at Turn 1, you’ll see that the turns have been designed so that they’re extremely wide and the apex is very short. It’s a very modern approach to slow corners where we hope overtaking will take place. So I’m very confident it will work well.

“Turn 1 is awesome! It’s the only word I can think of to describe it, and I think drivers and teams coming here for the first time will say the same thing.”

Whiting said he was assured that remaining landscaping and painting projects will be completed in a few weeks’ time. He will conduct one final check of the venue on Monday, Nov. 12, as Grand Prix week in Austin gets underway.

Source: Circuit of The Americas