McLaren's David Coulthard and Jaguar's Eddie Irvine are continuing with their verbal feud, this time with Coulthard on the attack. The pair's off-track handbags at dawn sniping has been providing some comic relief in a somewhat dull part of the ...

McLaren's David Coulthard and Jaguar's Eddie Irvine are continuing with their verbal feud, this time with Coulthard on the attack. The pair's off-track handbags at dawn sniping has been providing some comic relief in a somewhat dull part of the season and shows no sign of letting up.

Recently Irvine had a dig at Coulthard in the British press, commenting that the Scot was being shown up by the performance of young team mate Kimi Raikkonen. He also scorned McLaren managing director Martin Whitmarsh's opinion that Coulthard was getting better. 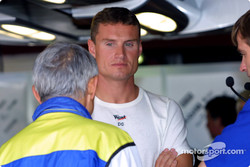 David Coulthard.
Photo by Brousseau Photo.
"I don't want to have a go at DC," Irvine stated, before doing just that. "But how bad does that make him in 1996, when McLaren hired him, if he's been -- as Whitmarsh says -- 'one of those rare drivers who year-on-year becomes a better driver than the year before'?"

Coulthard said Irvine denied the comments when he confronted him: "I tackled him in the paddock (at Spa) over his outburst but he denied saying anything. He made out he hadn't a clue what I was on about. It's nice to see that he is unique to Formula 1 because it is difficult to understand someone who has got two faces."

The McLaren driver went on to add a little more fuel to the bitching session: "At the last race in Spa, I praised Eddie for his qualifying performance and he accepted it gladly.But he appears reluctant to acknowledge what he has said about me or what I have achieved. The fact is that Eddie is doing nothing on the track with Jaguar and he is running out of time on the public stage. Maybe his future is night-club hopping with his hangers-on who tell him how wonderful he is."

Who needs soap operas? Over to you Mr. Irvine...