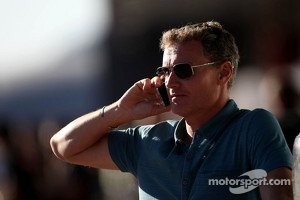 The former McLaren and Red Bull driver was reportedly told the bad news just before appearing live for an interview on a TV cooking show.

"He wanted to put on a brave face and just get the show done," said BBC commentator Coulthard's agent.

A spokeswoman said: "The circumstances are not believed to be suspicious."

Lynsay had a husband and young daughter.

The curious case of the F1 pay driver