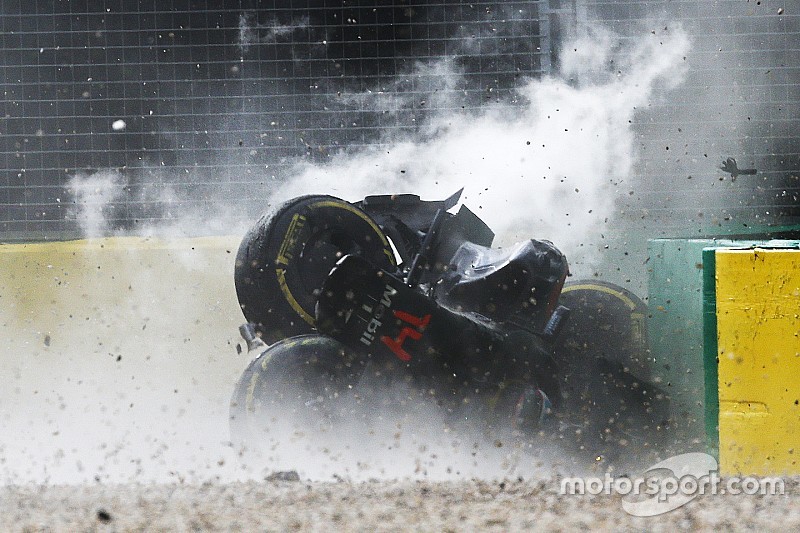 Fernando Alonso experienced a peak impact force of 46G during his 305km/h crash at the Australian Grand Prix, FIA data from the accident investigation has revealed.

The McLaren driver was lucky to escape without serious injury from the spectacular shunt at the season-opener in Melbourne, although cracked ribs forced him out of the following race in Bahrain.

The incident was the first that the FIA has been able to make use of a new rear-facing high-speed camera for a better understanding of what happens in crashes.

It was the footage from that, along with on-board data recorders and in-ear accelerometers, that have offered an unprecedented insight into what happened.

A report on the accident has been published in the latest issue of the FIA's Auto magazine and it reveals just how violent the crash was.

The findings are that Alonso was travelling at 313km/h when he tried to overtake Esteban Gutierrez, with his impact against the Haas rear wheel taking place at 305km/h.

With his front suspension broken, Alonso's car careered in to the wall at the side of the track with a peak lateral deceleration of 45G.

The high-speed camera revealed that Alonso's head struck the left inside of his headrest twice during the incident.

As the car slid down the grass, it dug in and flipped over – which resulted in another high lateral deceleration of 46G – barrel rolling through 540-degrees and being airborne for 0.9 seconds.

As it landed on its rear impact absorbing structure, it recorded a longitudinal acceleration of 20G.

The report concluded: "From an initial 305kph impact, the car of Alonso was able to manage three high-G decelerations and an airborne phase without major injury to the driver, primarily due to a range of safety systems on the car performing well for their designed purpose.”

Laurent Mekies, the FIA Global Institute's General Manager Research, said the lessons from the Alonso's accident – especially the video footage – will contribute to ever-better safety in the future.

“What we want to understand is the exact dynamic of the head, neck and shoulders in a high-G crash and how they interact with the other parts of the cockpit environment – the padding, the HANS, belts and anything else that can be in the space of the driver,” he said.

“This camera allows us to better understand the exact forces on the head to a given displacement, the elongation of the neck, how it engages with the headrests, how the headrests perform and what we need to do to produce the next generation cockpit environment.”

Mekies has hinted at there being more cameras to monitor drivers in the future, as well as the possibility of biometric data being used.

“You could imagine a million things tomorrow – you could imagine us trying to estimate the loads on the actual upper body of the drivers through the safety belts, for instance,” he said.