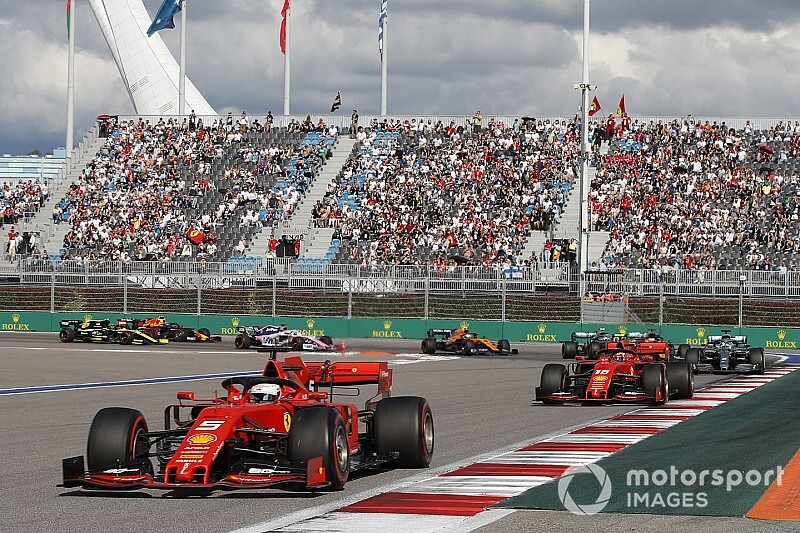 In the latest twist in the battle for Ferrari driver supremacy, was Vettel right to ignore team orders in the opening exchanges of the Russian GP?

Ferrari's efforts to try and salvage any form of championship fight were dealt a blow in Sochi after they failed to convert pole position into race victory, with Lewis Hamilton and Valtteri Bottas instead taking a one-two for Mercedes.

Following Ferrari's success in Singapore, they looked on course to continue their assault on Mercedes' championship leads when they completed the opening lap of the Russian Grand Prix in first and second, albeit with Sebastian Vettel having a mighty getaway and leapfrogging both Hamilton and team-mate Charles Leclerc into first place.

It soon transpired over team radio that this scenario had been discussed before the race, and that the plan was to give Vettel a slipstream at the start to ensure that both Ferrari drivers were ahead of the Mercedes cars.

The plan was then for Vettel to cede the position to Leclerc, who had been given preferential treatment due to taking pole position, and Ferrari gave the call to swap the drivers very early on in the race.

Vettel was, however, resistant to the command, and suggested that he had taken the lead on merit, before proposing to complete the swap when the Ferrari drivers had a bigger lead over Hamilton.

Instead his gap over Leclerc increased to around four seconds by the time the pit stops were being made, with Ferrari making the call to give the Monegasque a four-lap undercut, leaving Vettel to emerge from his pit stop in second place.

From there, it should have been a Ferrari victory, and probably their second consecutive one-two finish - which hasn't happened since 2008 - but a power unit issue forced Vettel into race retirement. This prompted a virtual safety car, which handed Mercedes a 'cheap' pit stop and gave Hamilton the lead of the race.

Leclerc had been running second after the Mercedes pit stops, but a full safety car prompted Ferrari to take an understandable punt on pitting Leclerc again for fresh soft tyres and have a better chance at challenging for the lead. However, he didn't have quite enough of a pace advantage to pass Bottas and had to settle for third place.

In the aftermath, Vettel defended his decision to reject the call to swap positions and said that he had stuck to the pre-race agreement, something which team principal Mattia Binotto seemed to agree with, despite Ferrari obviously having to orchestrate the driver swap via the pit stops.

Do you think Vettel was right to disobey team orders? Listen to the latest episode of the Autosport Podcast before leaving your thoughts in the comments section below.