The relocation of a 'GRIP' setting on Ferrari's 2017 F1 car has prompted intrigue about whether the team's advantage with tyres is being helped by use of some clever driver-adjustable settings.

Both of Sebastian Vettel's victories this year have been based on his Ferrari SF70H being better in looking after its tyres, and more especially having a much wider operating window to use all the compounds in all types of conditions.

As rival Mercedes motorsport boss Toto Wolff said over the Russian Grand Prix weekend: "The wider the window is, and the easier you put the car into the tyre window, the faster you go. The more narrow it is, the more difficult it is to hit the window, and this is what we are seeing at the moment.

"The Ferrari seems to be a car that is pretty robust in a wider window temperature than ours, and it doesn't matter whether it's Bahrain, where it's very hot, or Sochi where it's cold. It's just a very good car."

While Mercedes is chasing answers as to why its car operates in such a narrow window, Ferrari's rivals also want to understand how the Maranello team's car is so good everywhere.

And the answer could well go beyond the pure chassis, suspension and aerodynamics of Ferrari's 2017 challenger, and extend in to what the drivers are able to do from the cockpit. 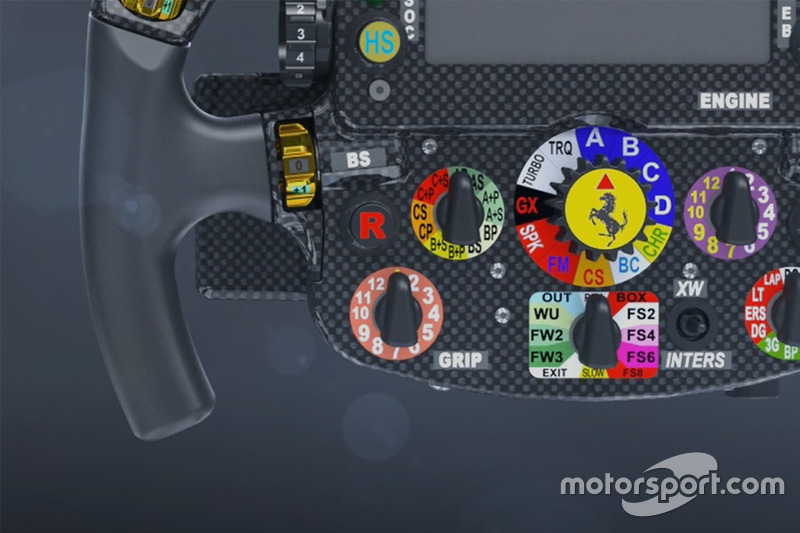 Giorgio Piola's exclusive video of the changes (below) that Ferrari has made to its steering wheel for 2017 offer a clue that some of the advantage could come from the way that the driver is able to optimise car settings to help tyre performance throughout the race.

The Manettino dial has been moved from inside the cockpit on to the wheel for this year, which shows its importance has increased. With settings that run from 1-12, it is labelled as 'GRIP' - which suggests it is related to how the car is handling on its tyres either in races or at starts.

It is the only major change from Ferrari's traditional dials from 2016 and its positioning on the wheel, at the bottom left on both Vettel and Raikkonen's cars, shows it is quite important for easy access. 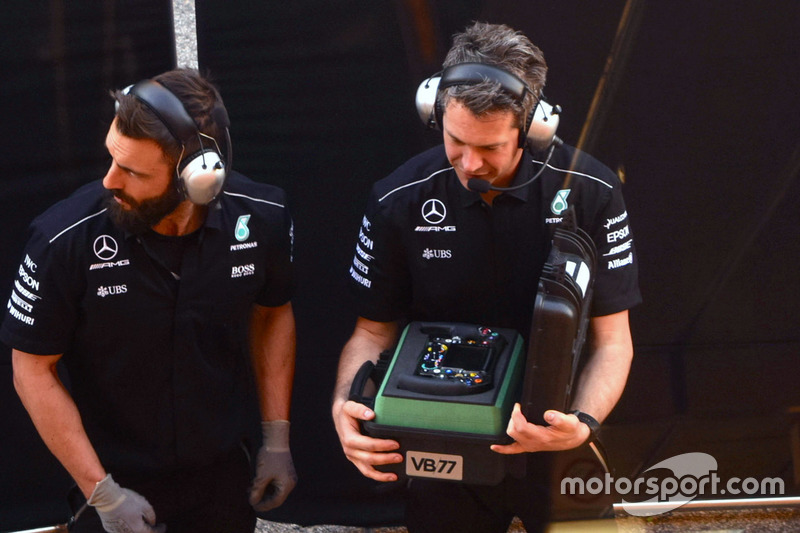 For 2017 the importance of controls on the steering wheels has increased, with teams like Mercedes even keeping their wheels hidden in boxes when outside of the car to prevent prying eyes from seeing what it is up to.

Furthermore, it doesn't even fit its real wheel when the car is taken to scrutineering - instead fitting a dummy one.

Race or start use?

The fact that the team has moved the dial on to the steering wheel shows there must be value to it, because space in front of the driver is at a premium.

While drivers already can change controls like differentials, engine mapping and brake balance to help with handling, the possibility of having pre-loaded settings that can be adjusted based on what the tyres are doing could allow the car to be more compliant to the state of the Pirellis.

That means coping with a shifting car balance front-to-rear, bringing tyre temperatures into line better, plus adjusting for the transition from a heavy fuel load to a light fuel load.

The 'GRIP' dial could also be related to the new start procedures, with drivers having to decide for themselves about various settings away from the line, so any adjustment on clutch engagement based on grip levels would be beneficial.

What Vettel and Raikkonen can change based on grip certainly is not the magic bullet to explain Ferrari's strong form. But, in a sport like F1, marginal gains can be the difference between success and defeat it offers a glimpse about the detail the team has gone to get back to the top.

Piola's steering wheel video also offers some interesting insight into subtle changes to the wheels to help increase comfort for the drivers.

Vettel's wheel last year had longer and thinner hand grips, and for this year they have been shortened and beefed up – probably as a consequence of the increased forces drivers are experiencing with the 2017 cars.

Raikkonen's wheel has also a different shaped grip, with an indent towards the top to help suit his needs.

Behind the wheel, the single clutch paddle that Ferrari used last year has been retained.

As Motorsport.com revealed, Ferrari became the first team to run a new type of long clutch paddle that pivoted in the centre, rather than having separate paddles on both sides of the wheel.

The length allowed the drivers to have a better control over clutch release, and has been retained for this year despite a new 80mm limit of movement that has been imposed.

Gilles Villeneuve Museum to get bigger and better