Jul.8 (GMM) Bernie Ecclestone has admitted he has told his friends to stay away from Silverstone. 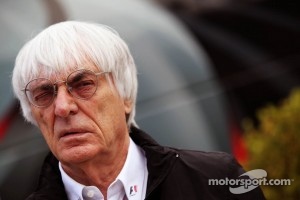 As weather forecasters predict another wet day in rural Northamptonshire, organisers of the British Grand Prix are at least urging spectators to battle the mud and the traffic to attend on Sunday.

And although qualifying was red-flagged for a long time on Saturday, F1 chief executive Bernie Ecclestone insists he is "not worried" the race might have to be called off.

"The race will go on -- we will do our job and it promises to be a great race," he told the Daily Mail.

"But I am worried about the weather and the fans. I don't want a repeat of Friday's scenes, but the forecast for Sunday is bad and we are expecting more people than on any other day.

"This is why I've told all my friends not to come. It feels strange telling them that, but I am thinking of them," said the 81-year-old.

The Times journalist Kevin Eason surmised the prospect for Sunday: "It will be a day for heroes and wellingtons."