Lewis Hamilton won the Emilia Romagna Grand Prix for Mercedes at Imola, round 13 of the Formula 1 World Championship, after vaulting from third to first in the pitstop cycle. 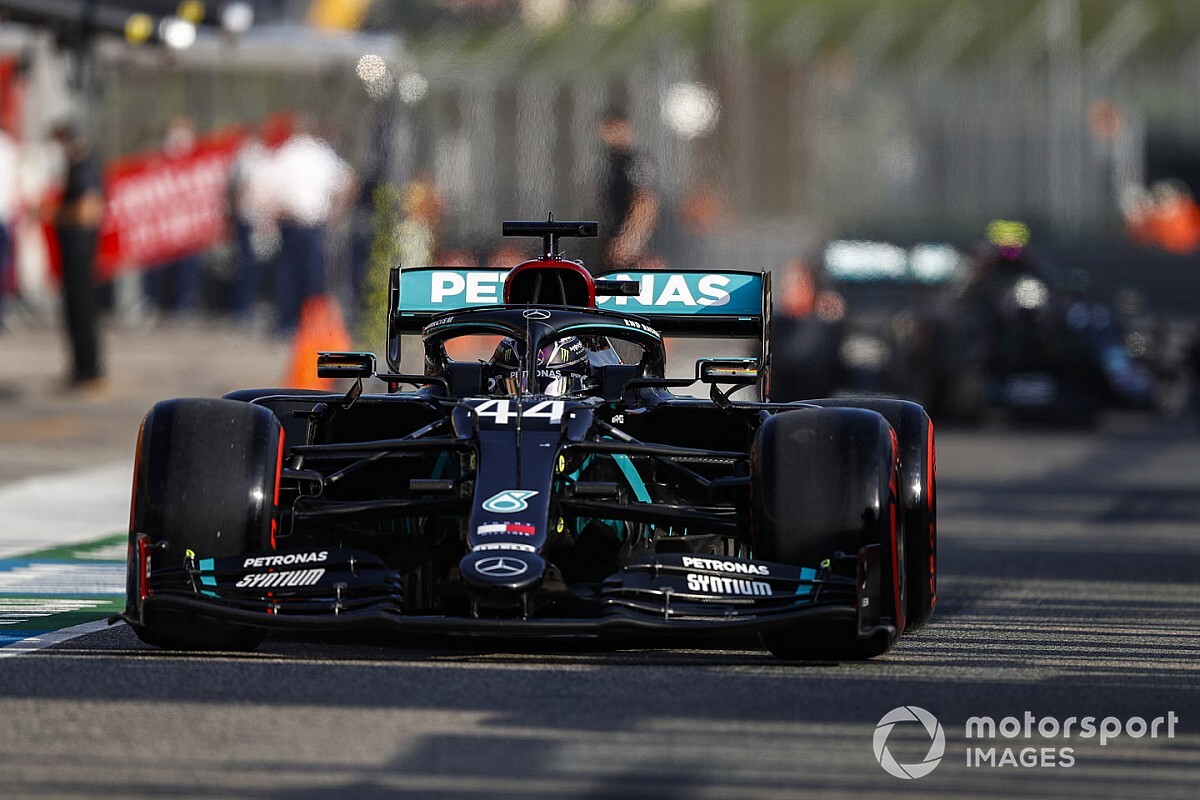 Mercedes sealed the 2020 constructors' championship with a 1-2 finish, despite a troubled race for poleman Valtteri Bottas.

Bottas led from the start, with Mercedes teammate Hamilton losing second to Max Verstappen's Red Bull on the charge to Turn 1.

Hamilton was unable to pass Verstappen, as Bottas pulled clear out front. Verstappen triggered the pitstop sequence, when he tried to undercut Bottas for the lead. That bid failed when Bottas pitted a lap later to cover him, but that opened the door to Hamilton overcutting them both.

He reeled off a sequence of fastest laps, and just when lapped traffic could have impacted his bid to extend a sufficient lead, Hamilton struck lucky with a Virtual Safety Car to recover Esteban Ocon's stranded Renault. He was able to pit under the VSC, which ensured him staying out front, rejoining well clear of Bottas – who was suffering floor damage on lap two – and Verstappen.

Bottas ran wide at Rivazza on Lap 42, allowing Verstappen to get a run on him and pass under braking for the first chicane.

With 12 laps to go, Verstappen flew off the road after a right-rear tyre failure approaching the Villeneuve chicane. That caused a safety car, during which George Russell crashed his Williams while warming his tyres on the run to Acqua Minerale.

Hamilton just missed the pit entry under the safety car, but was able to pit and rejoin ahead of Bottas at the second attempt, both now on fresh soft tyres. Sergio Perez gave up a podium place for Racing Point by also pitting for new rubber, allowing Renault's Daniel Ricciardo to grab third.

The safety car period ended with five laps remaining, with Daniil Kvyat (AlphaTauri) and Perez passing Red Bull's Alex Albon, who then spun down to last place. On new tyres, Kvyat also passed Ferrari's Charles Leclerc around the outside at Piratella to grab fourth.

The McLarens of Carlos Sainz and Lando Norris finished seventh and eighth, ahead of Kimi Raikkonen (who drove a long first stint in his Alfa Romeo) and teammate Antonio Giovinazzi.

The Emilia Romagna GP as it happened