Join us as we delve into the latest technical developments from the second round of the 2021 Formula 1 World Championship at Imola, courtesy of Giorgio Piola and Sutton Images. 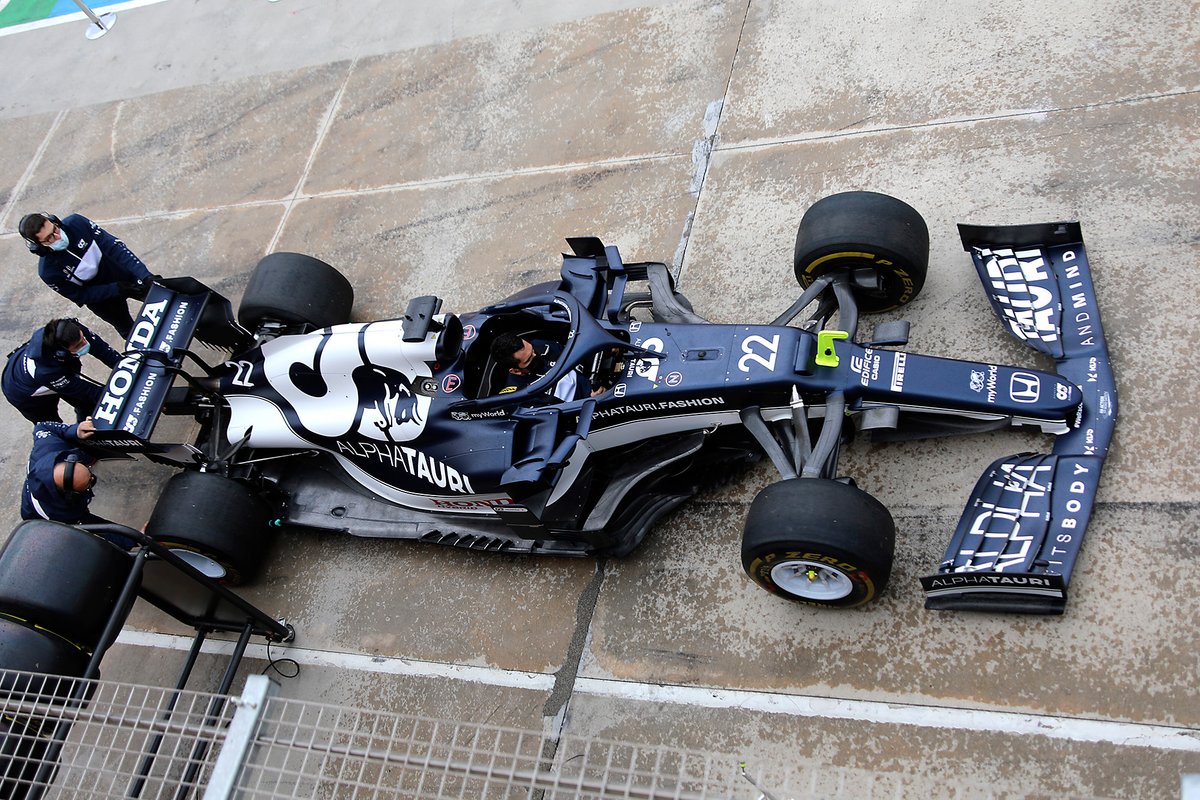 A top-down overview of the AlphaTauri AT02 shows the team has added a cluster of fins to the edge of the floor where it begins to taper back.
AlphaTauri AT02 floor detail 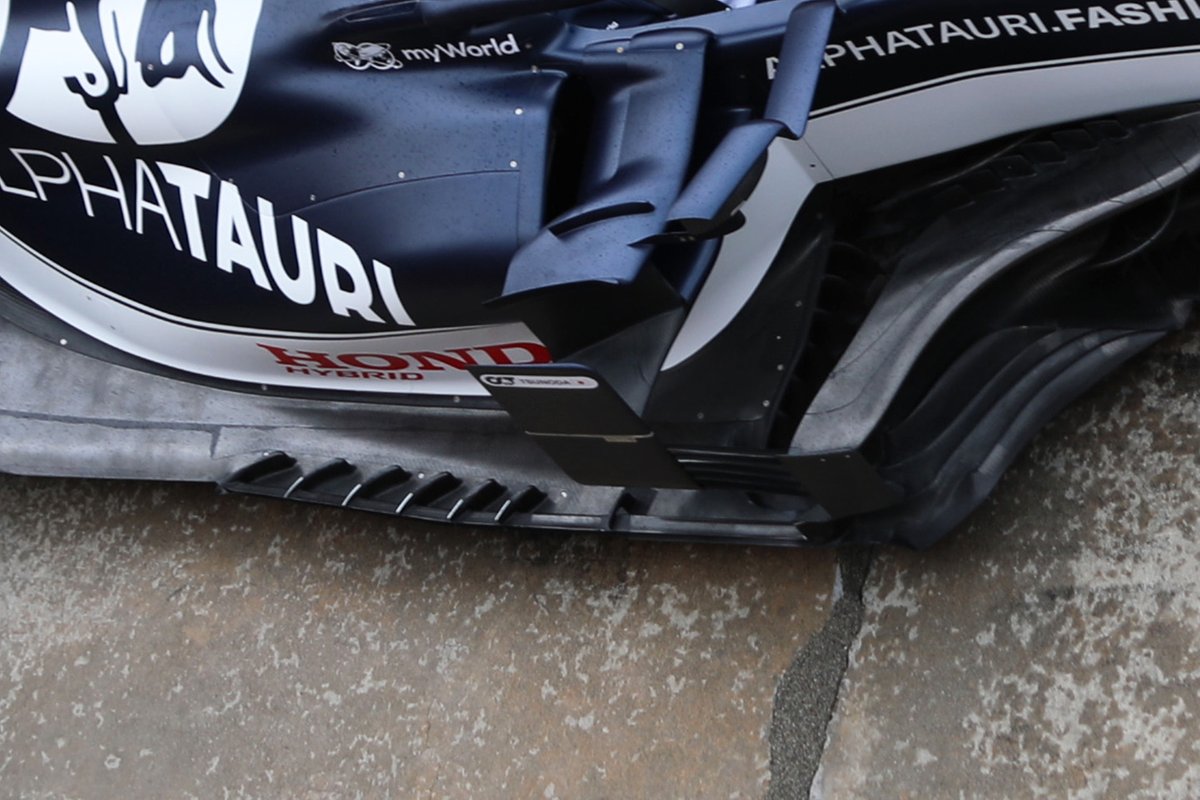 A close up of that region shows how the fins are angled slightly to take into account the taper of the floor.
Alpine A521 front wing comparison 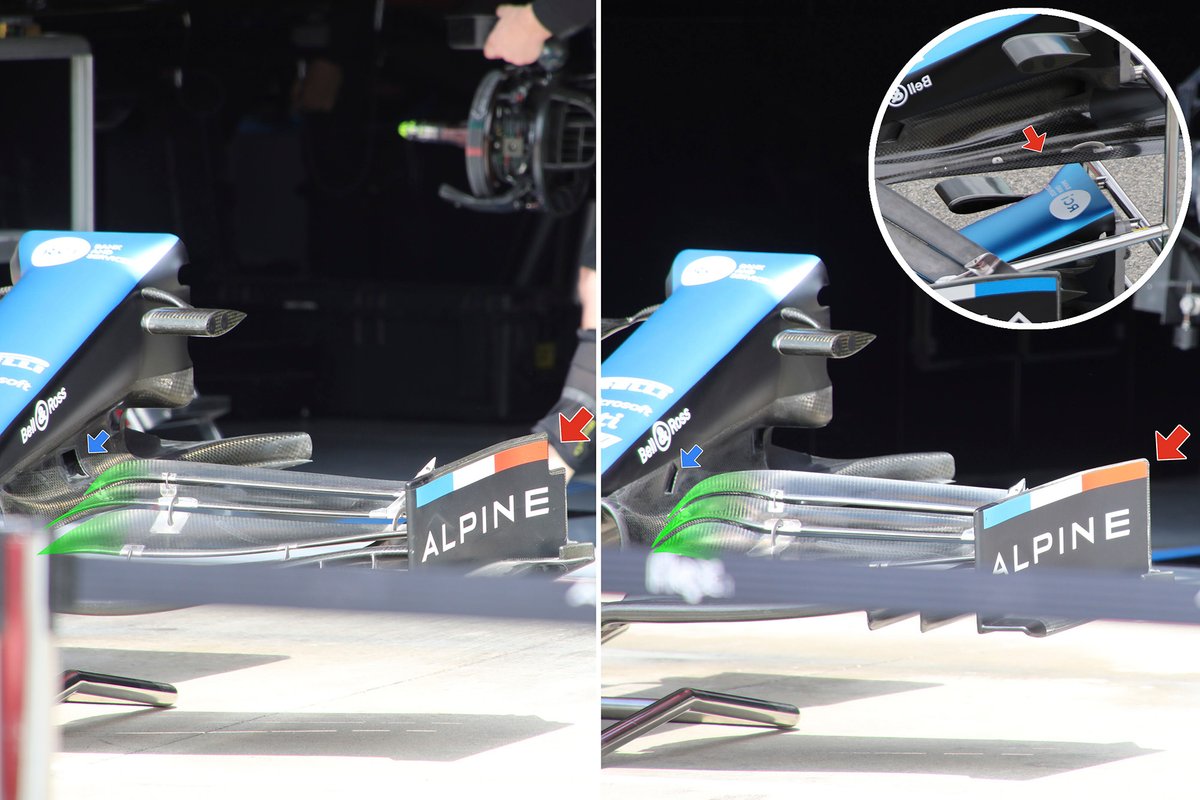 A look at the changes that Alpine will test at Imola, including a new set of front wing flaps (highlighted in green, right) and a new cape, with a new slotted section (red arrow, inset) and revised flow inlet (blue arrow, right).
Williams FW43B top view 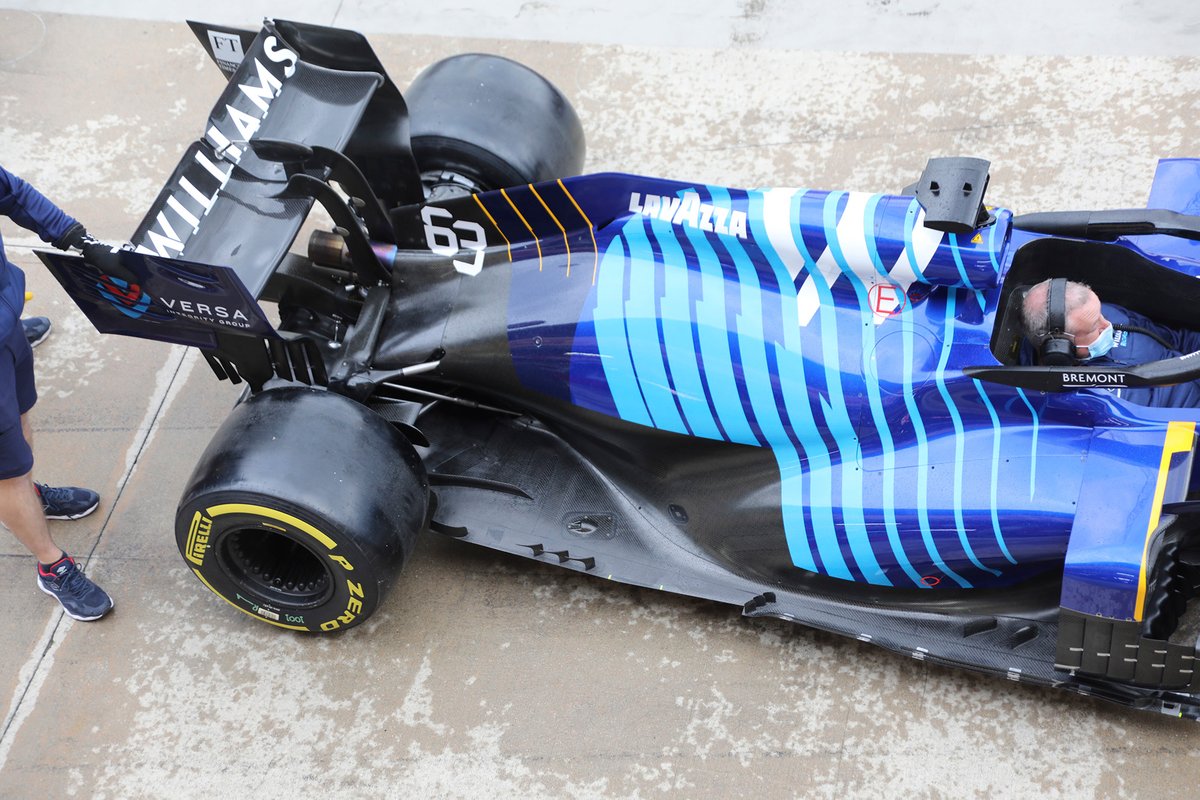 Williams becomes the sixth team to employ a Z-shaped floor cutout at Imola, as its floor is now cut back toward the trio of slots on the floors edge.
Aston Martin MR21 front wing 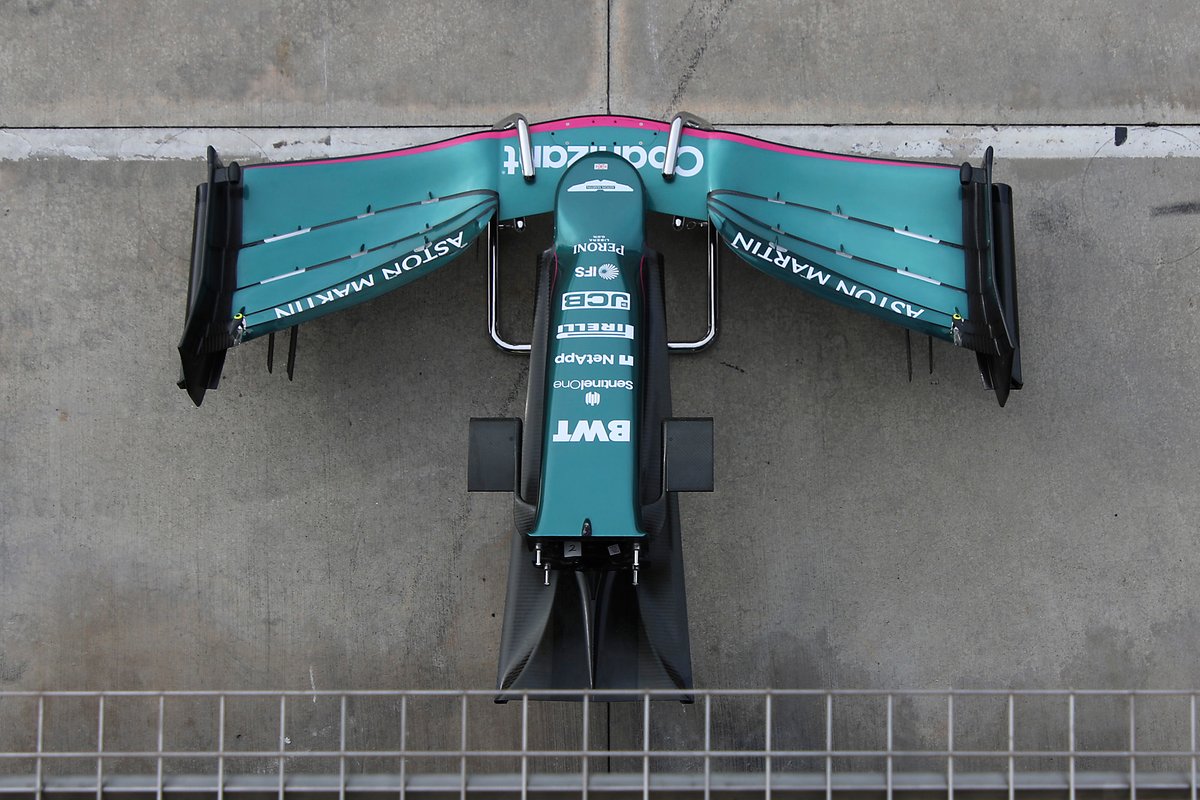 Top-down overview of the Aston Martin AMR21 nose and front wing. Note how the cape creates a boat-tail shape as it trails behind the nose.
Ferrari SF21 front wing 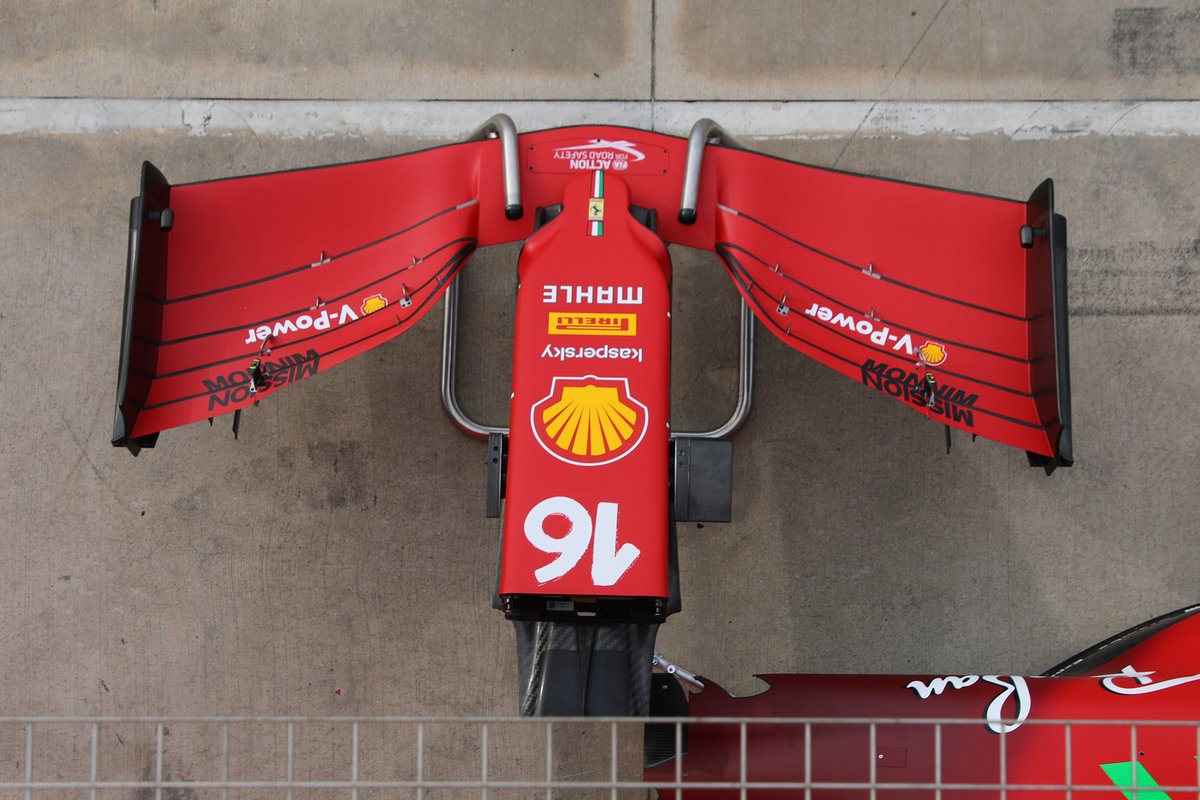 Ferrari’s nose and front wing from above as a comparison to the Aston Martin has a much narrower cape section at the rear as it will merge with the turning vanes mounted to the underside of the SF21’s chassis.
Red Bull Racing RB16B front 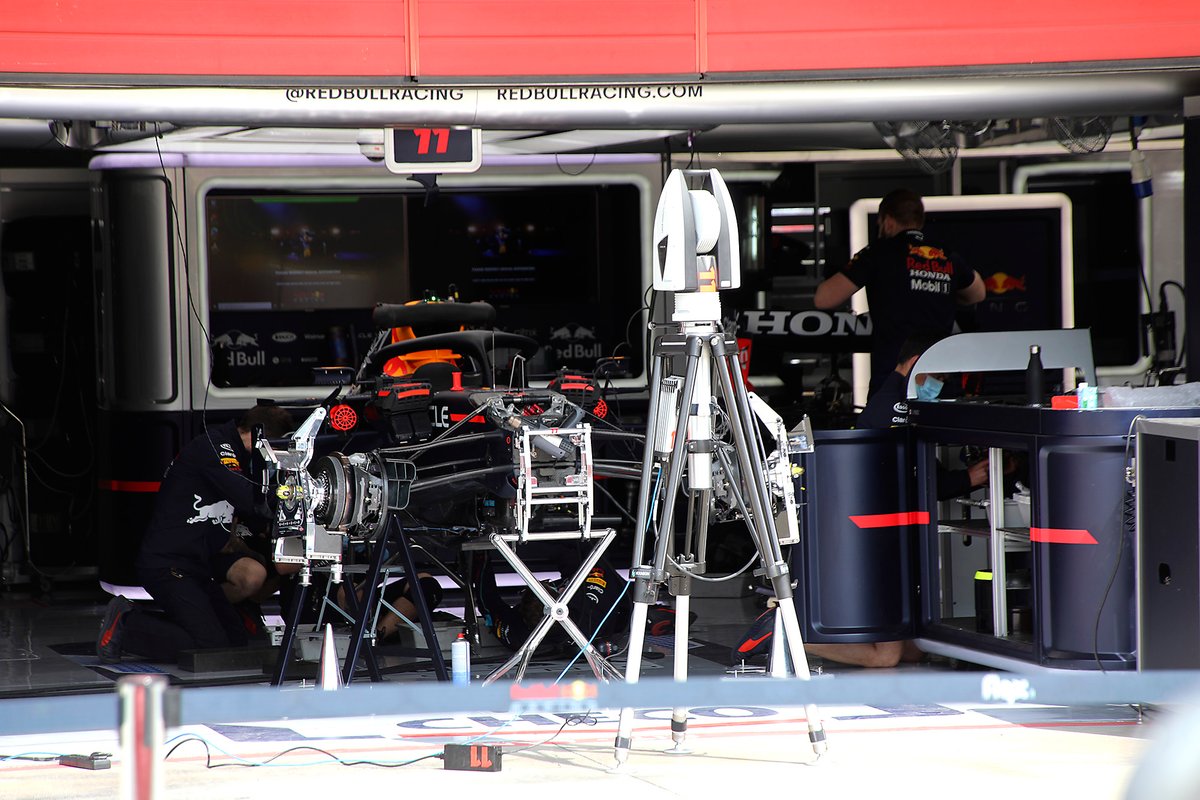 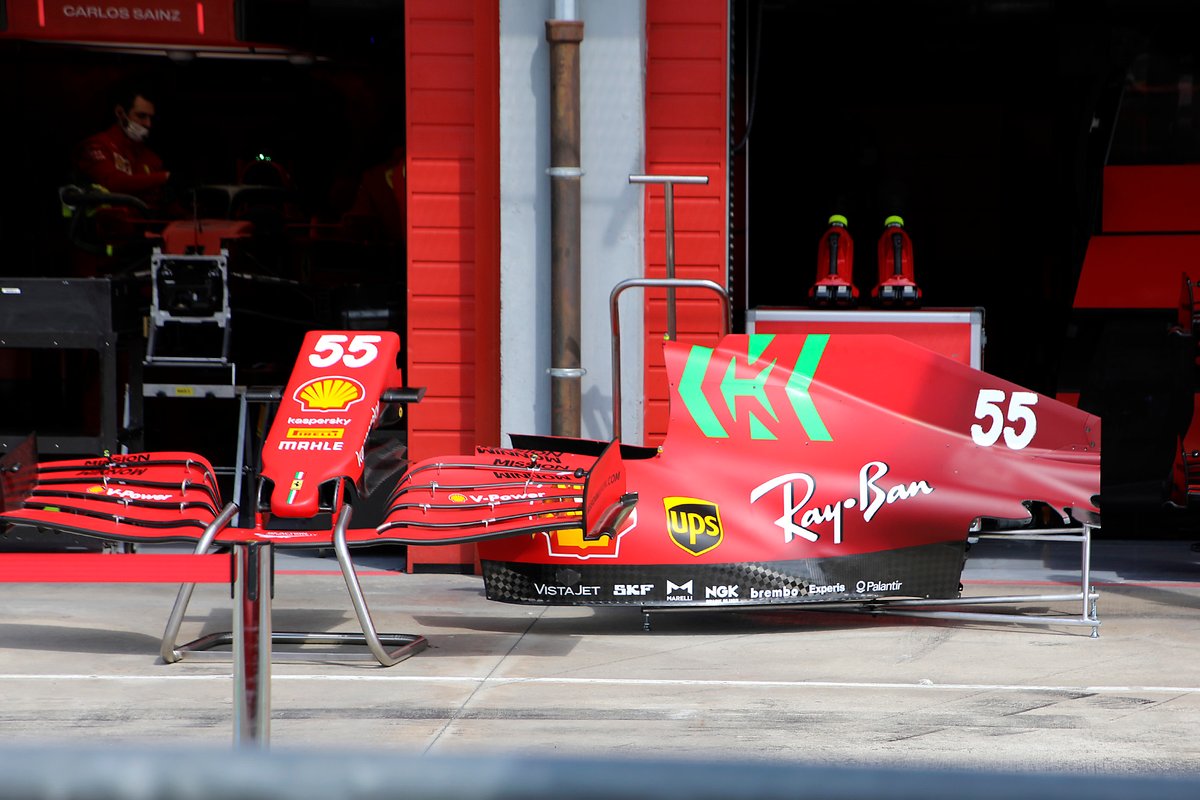 The engine cover of the Ferrari SF21 presented in this manner gives us a clearer indication of the shapes used to enclose the internal components. Note how the sidepod ramps down to where the floor would be and how the bodywork haunches over the coke bottle region to form the cooling outlet above it.
Alpine A521 front 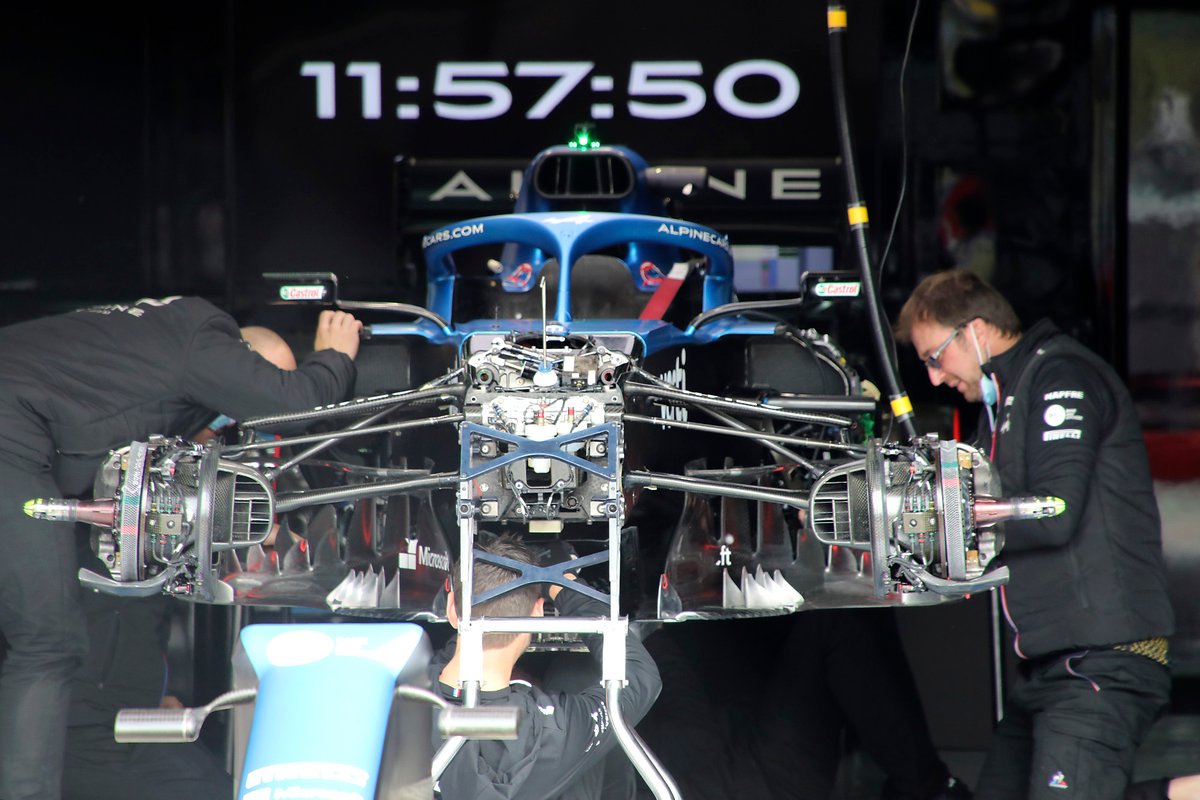 A great shot of the Alpine A521 shows us the pipework used to carry airflow collected by the main brake inlet that’s dispatched out of the wheel face and we can see how the bargeboards are made up of several layers.
Alfa Romeo Racing C41 front wing detail 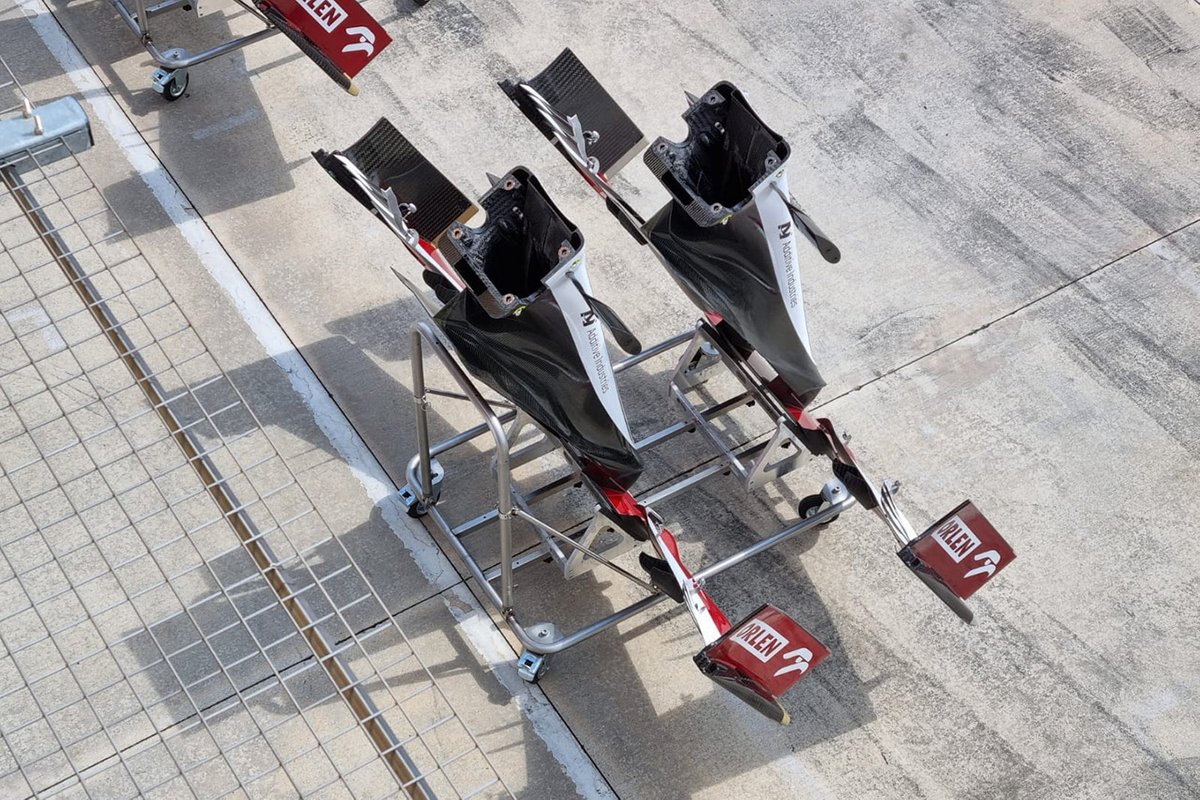 An interesting view of the Alfa Romeo C41’s nose and front wing – note the channel inside the nosecone which feeds the ‘S’-duct outlet and is fed air from inlets at the front of the structure.
Alfa Romeo Racing bodywork 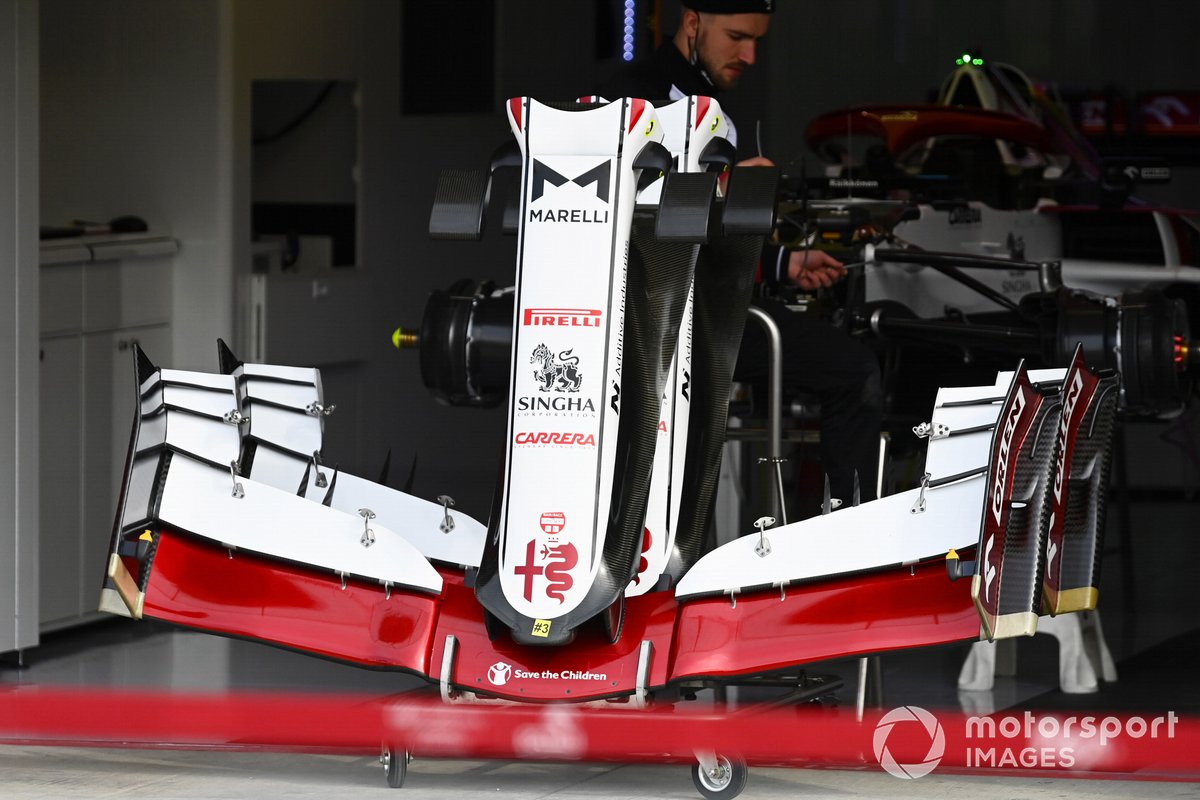 From the front this time – note the hole in the C41’s front wing footplate that allows the air passage from the top of the footplate to the underside.
Alfa Romeo Racing C41 detail front wing 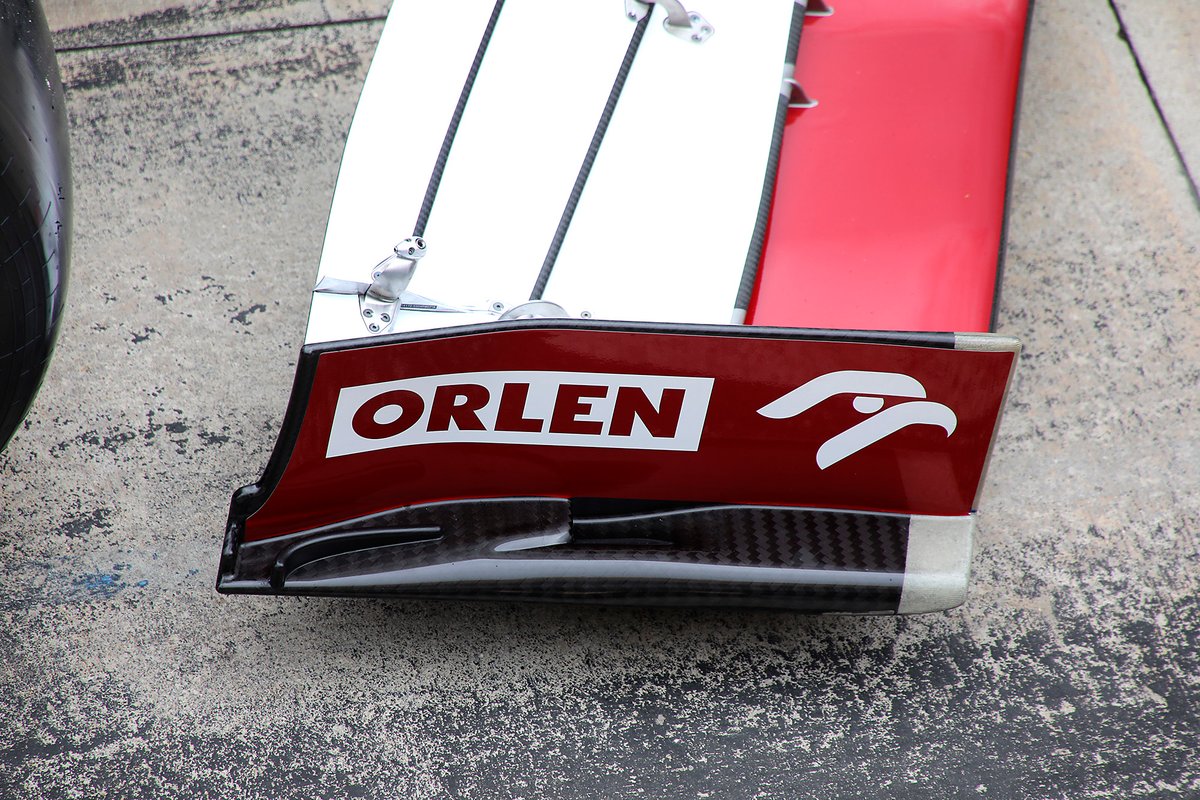 Here’s another angle of that region on the Alfa Romeo C41’s footplate, which shows how the surface is designed to encourage the airflow to move between the upper and lower surface, while also offering support for the flow over the top thereafter with an outwardly-angled fin.
Red Bull Racing RB16B front suspension front brake 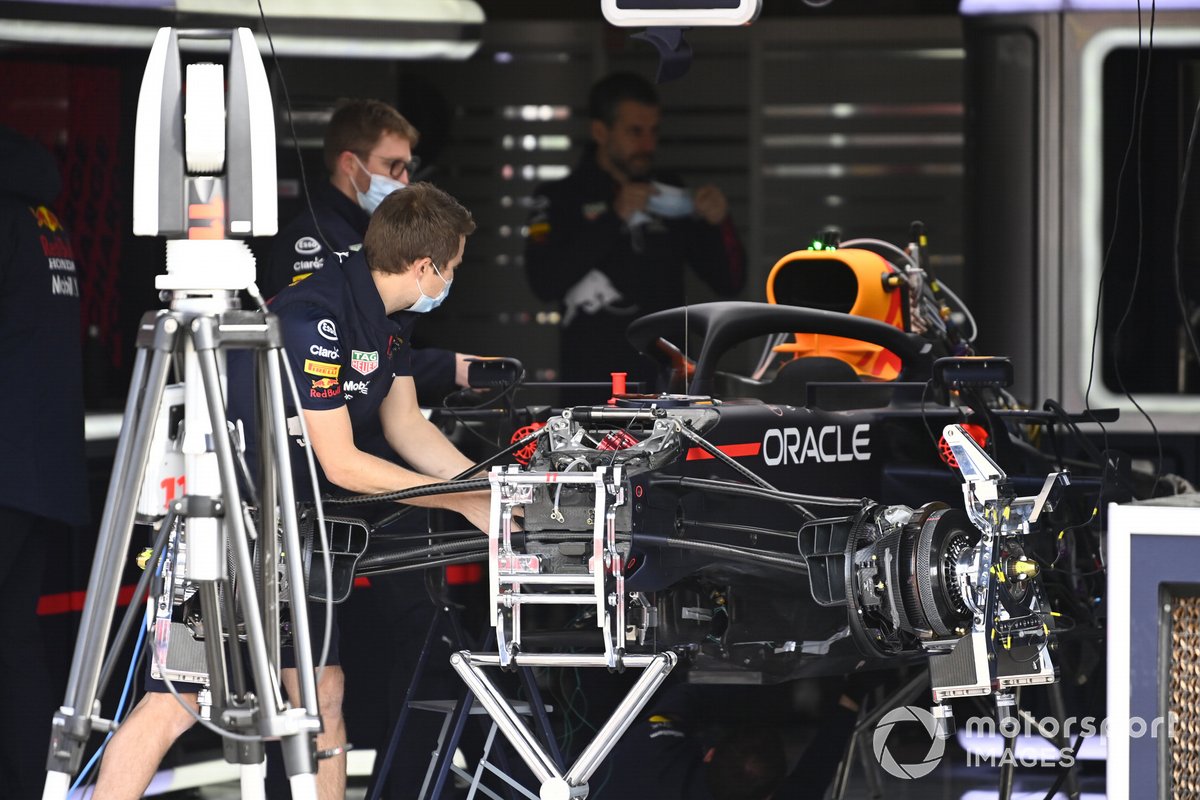 As the RB16B is prepared for action we’re given the opportunity to see the front brake assembly and inboard suspension in a state of undress.
Alfa Romeo Racing C41 rear 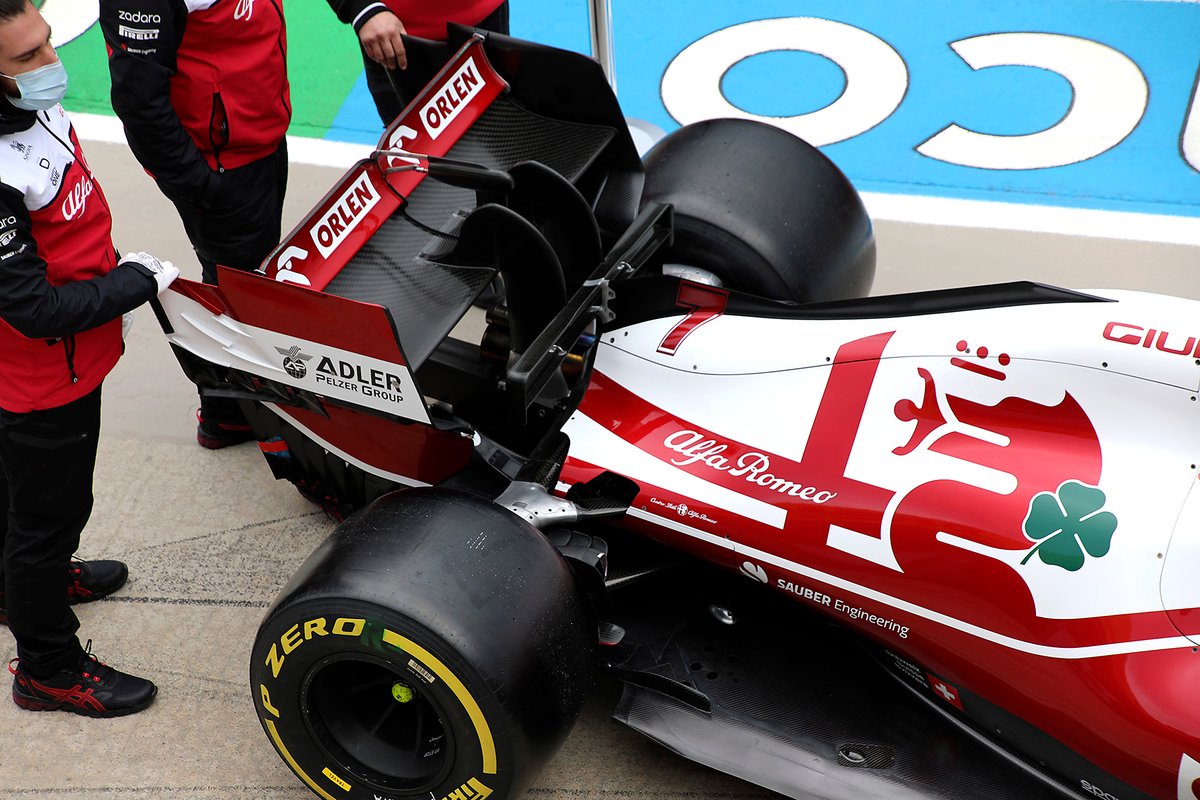 The top-down shot of the Alfa Romeo C41 gives us an idea of how far the trailing edge of the floor is from the tyre. In recent years, teams have tried to get the floor as close as possible to the floor but this year it appears that may not be the route to take.
Ferrari SF21 rear wing 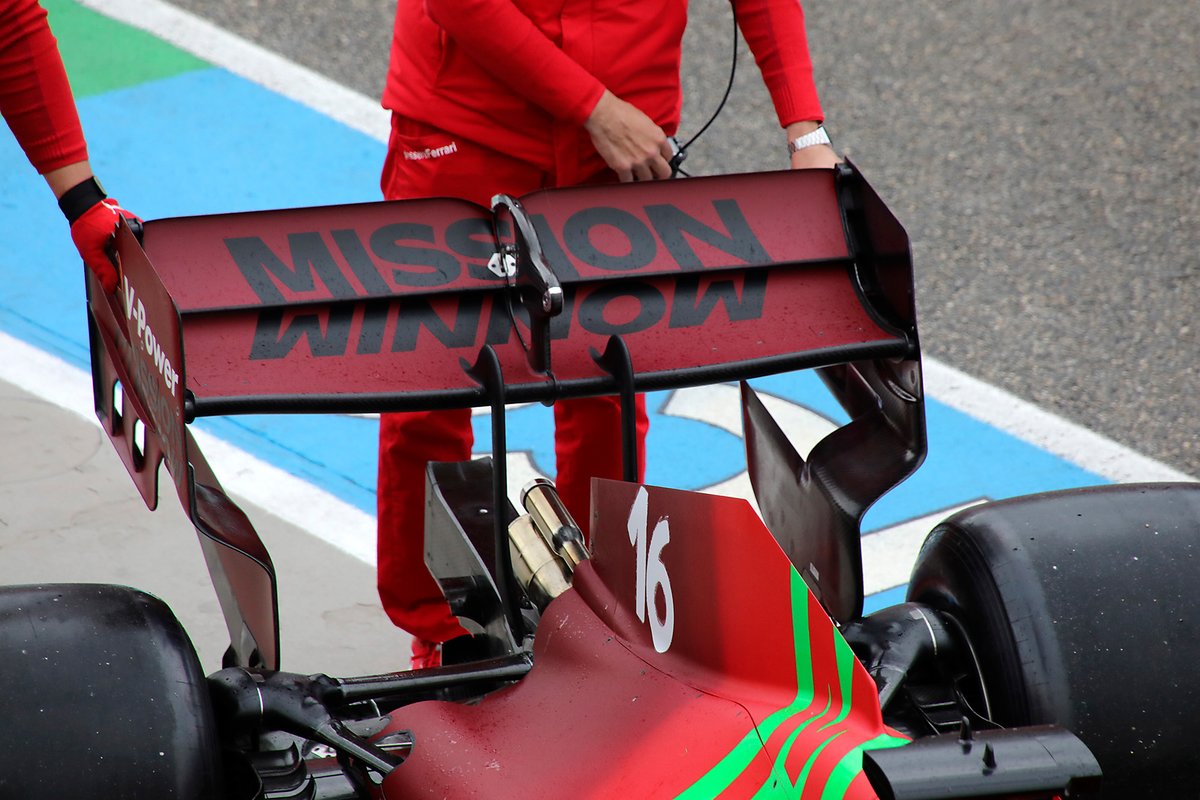 Ferrari went to scrutineering with a spoon-shaped rear wing and no T-wing installed on the SF21.
Ferrari SF21 rear 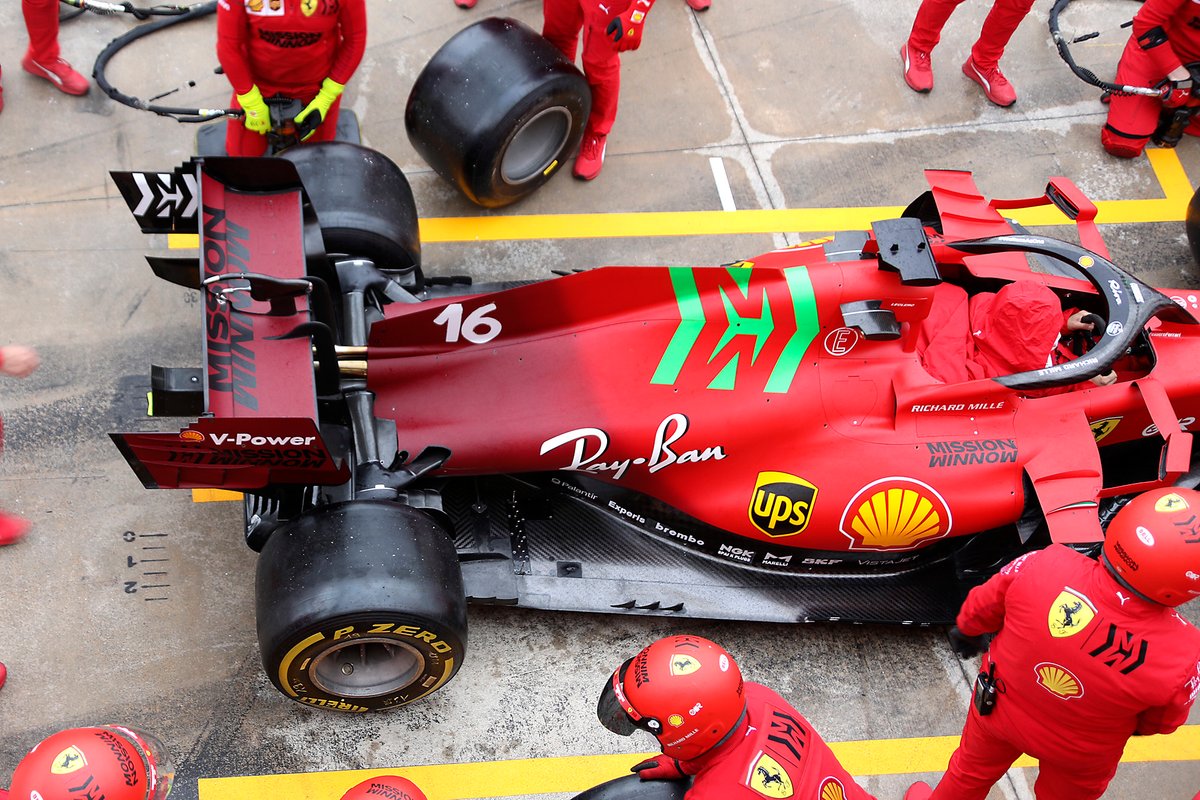 A look at the SF21’s rear end as the team conducts pitstop practice. Note the use of a fully tapered floor, with a trio of fins mounted midway along the floor to help push the airflow across the rear tyre, while the cluster of fins ahead of the rear tyre help to pitch the flow in the gap between the edge of the floor and tyres’ sidewall.
AlphaTauri AT02 rear wing detail 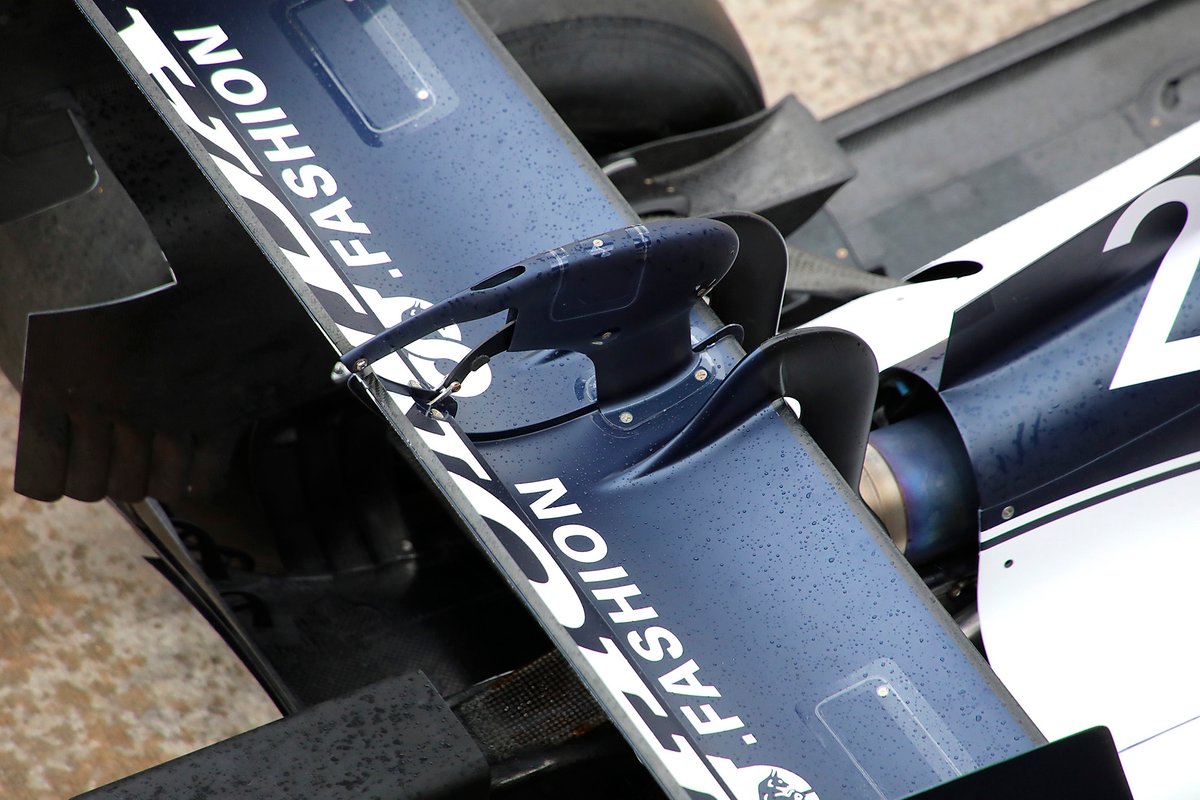 A close up of AlphaTauri’s rear wing and the DRS actuator pod.
Alpine A521 detail front wing 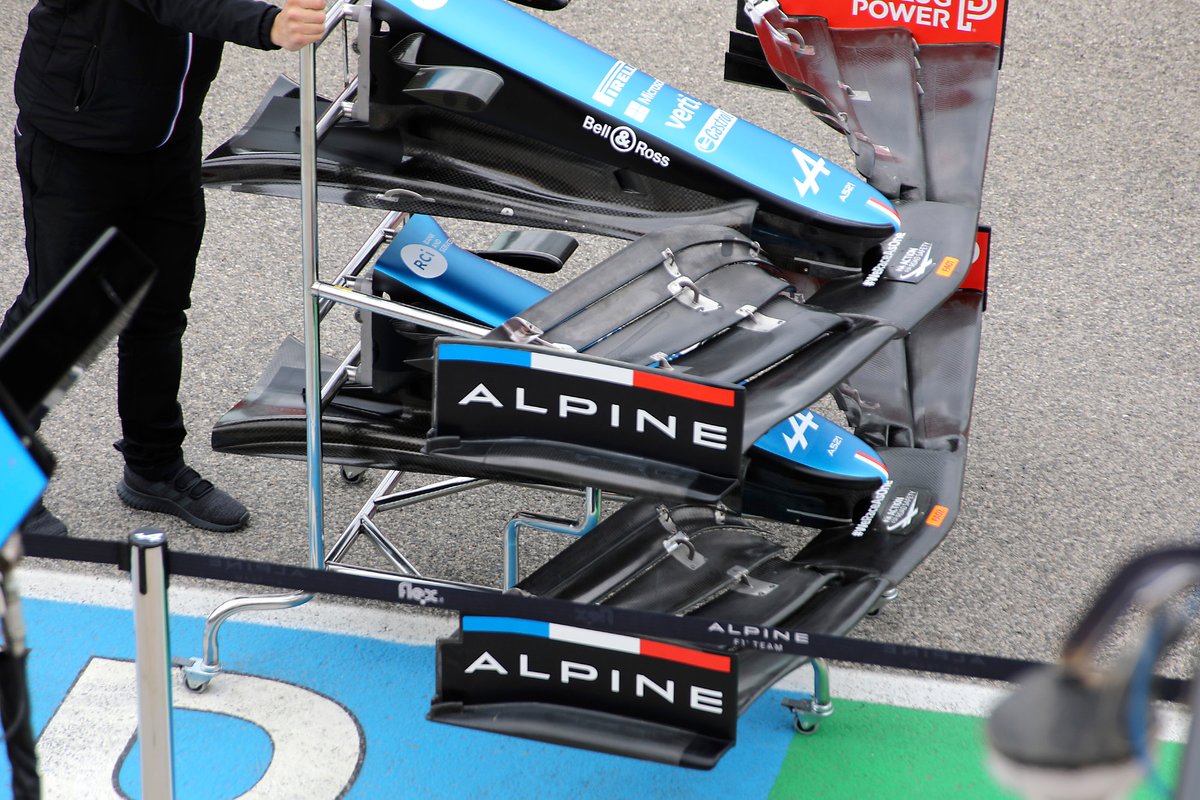 Alpine’s two front wing options on the trolley as they’re wheeled to scrutineering. Note the top of these two is the new version which features a new endplate (no notch in the upper rear corner), a new design for the inboard section of the wing flaps, a new position for the inlet on the side of the cape and a new flap/slot on the edge of the cape.
AlphaTauri AT02 front wing detail 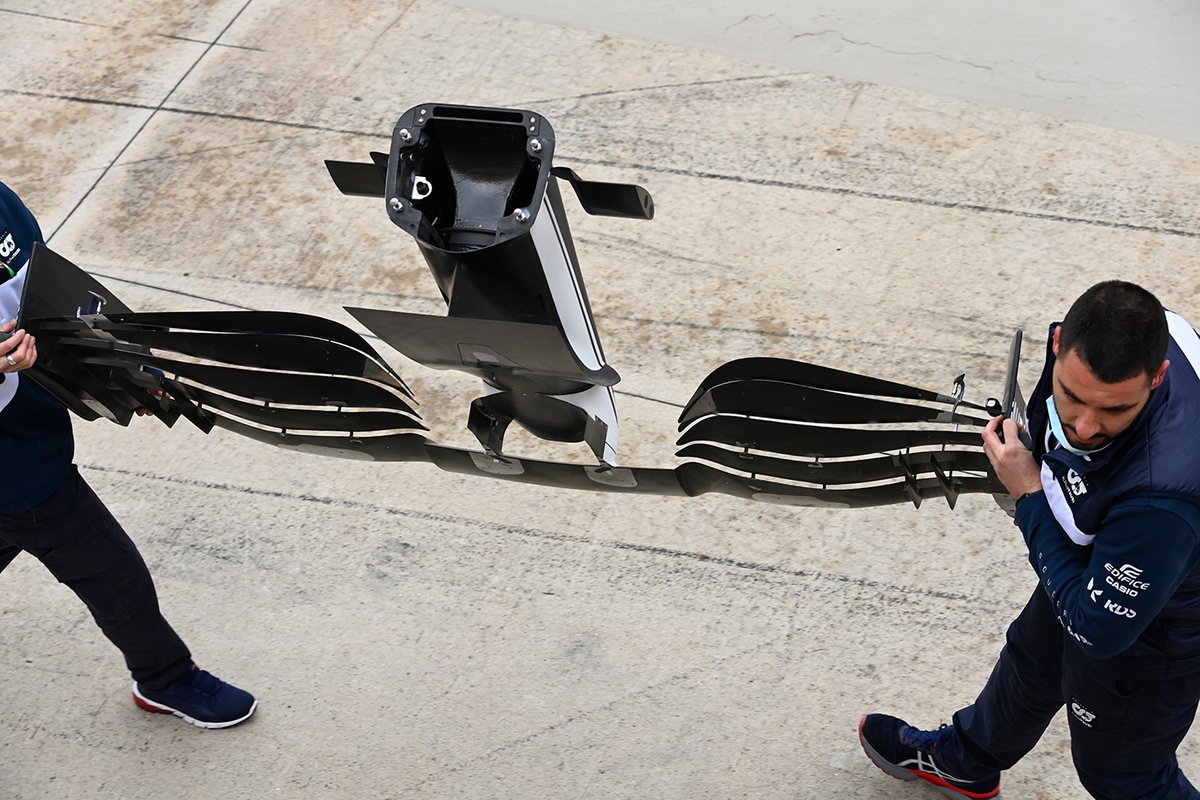 A look down into the AlphaTauri’s nosebox shows how the team’s ‘S’-duct is mounted within.
AlphaTauri AT02 front wing detail 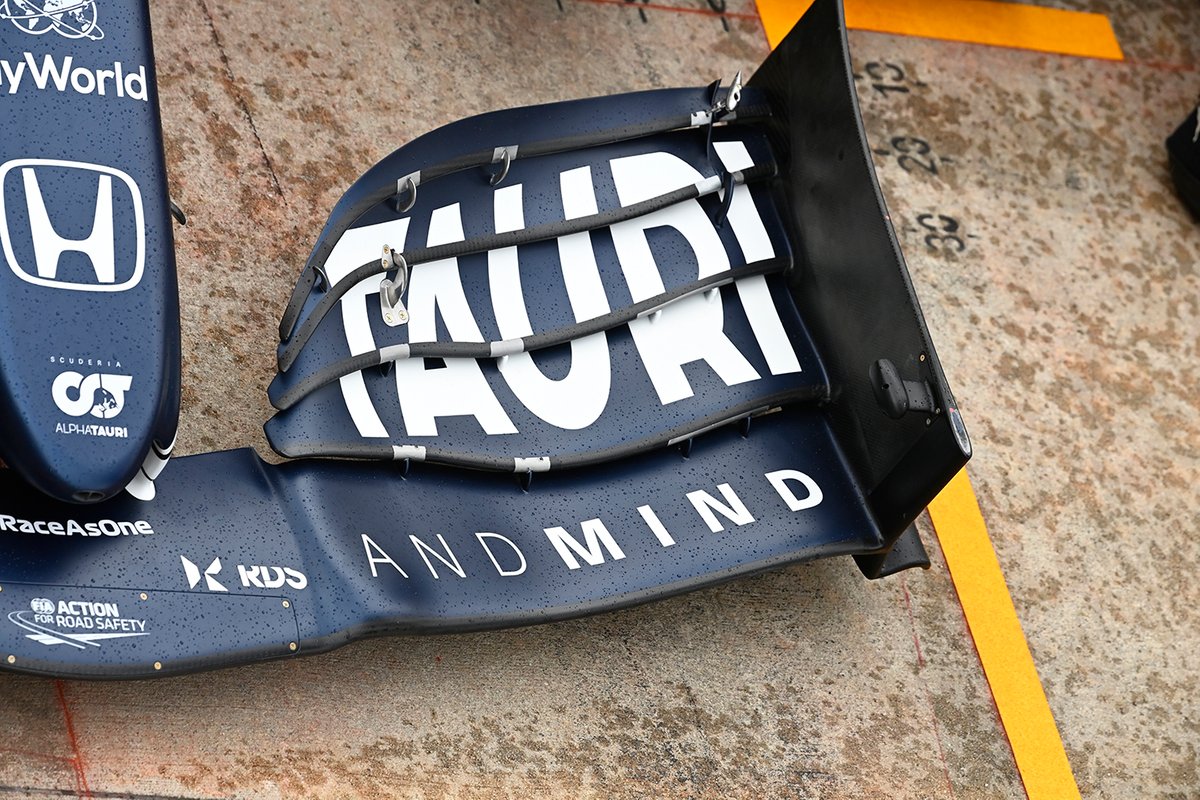 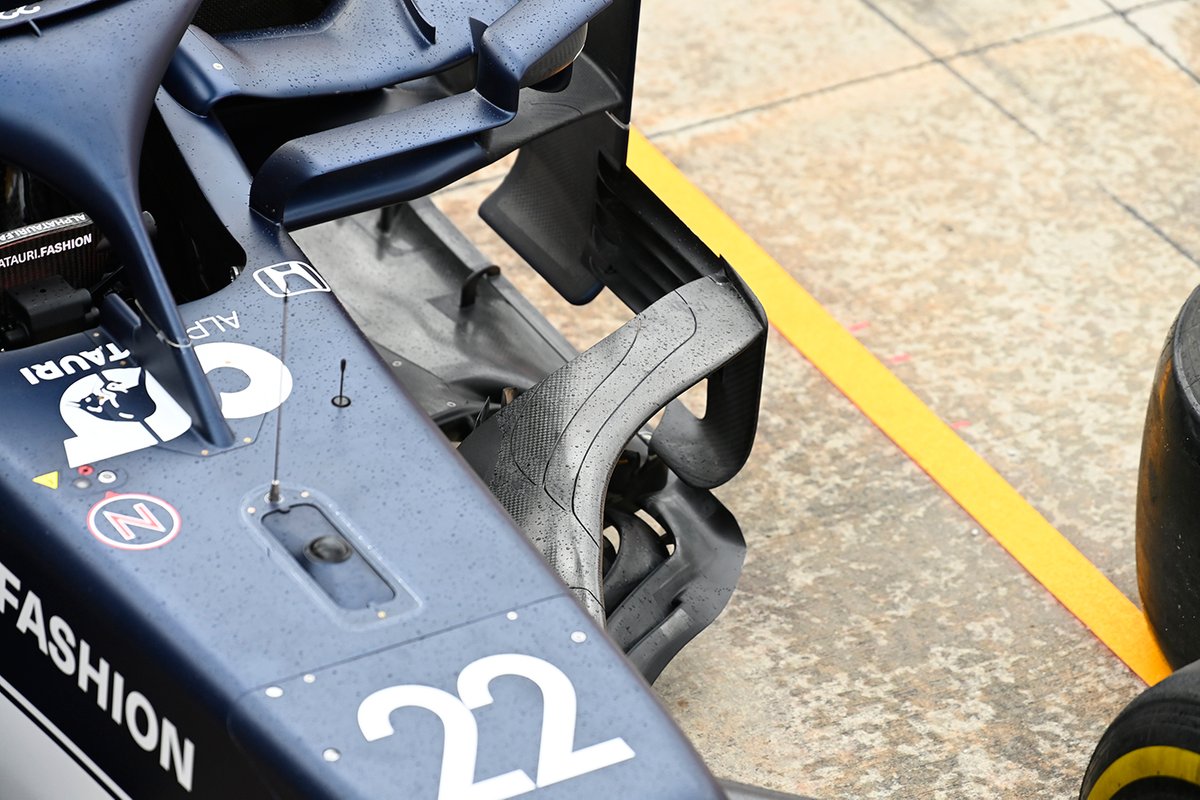 A close up of the AlphaTauri AT02’s upper boomerang shows the slots that mirror the slots in the bargeboards footplate below for legality purposes.
AlphaTauri AT02 floor detail 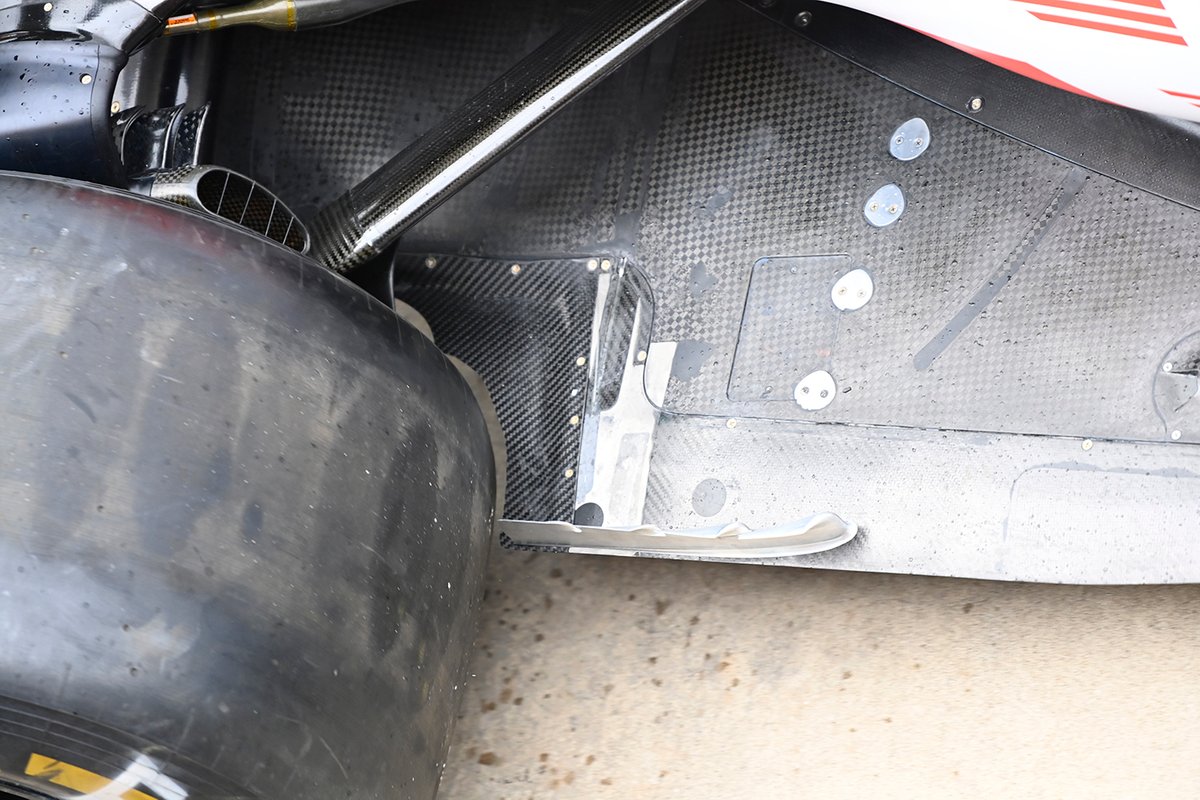 The fins mounted ahead of the rear tyre on the Alpine A521 are just one of several configurations used by the team this season.
Alpine A521 bargeboard detail 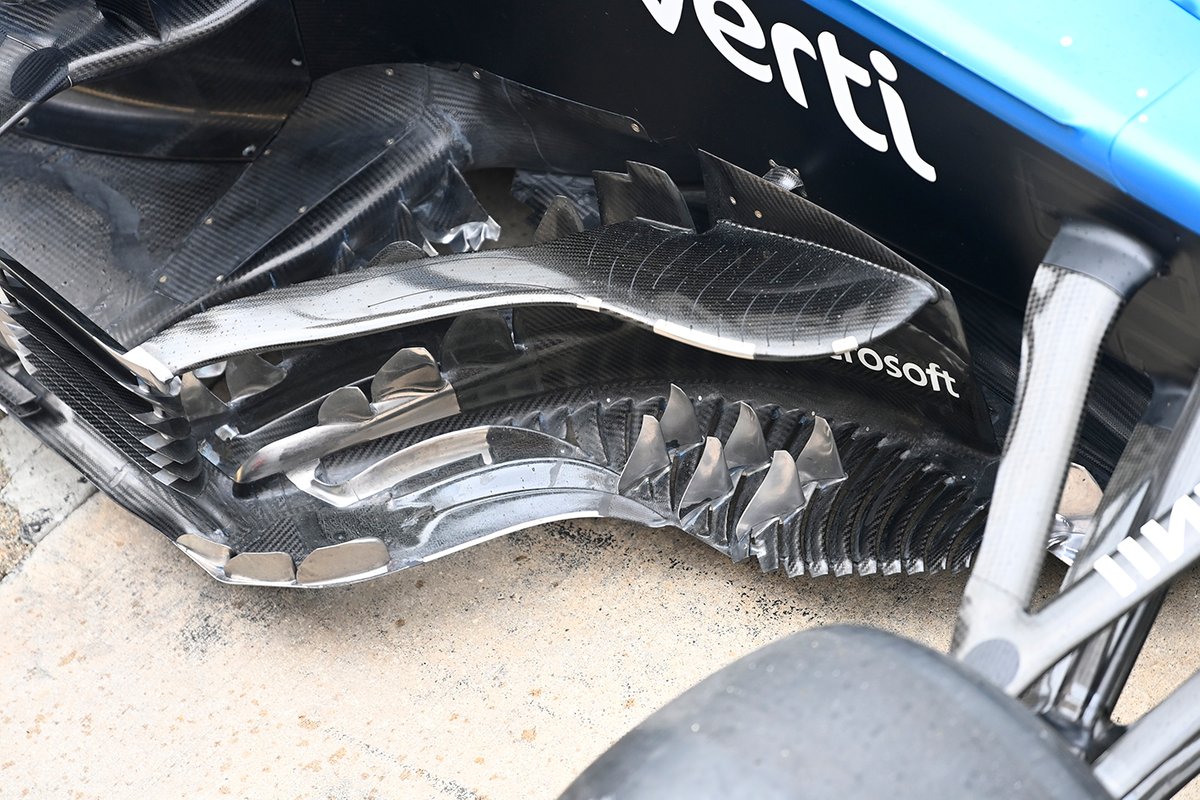 The extremely complex bargeboard cluster on the Alpine A521, which has various surfaces to help manipulate the airflow. Also note how the floors leading edge strakes have now also been subdivided by more serrations.
Alfa Romeo Racing C41 front wing detail 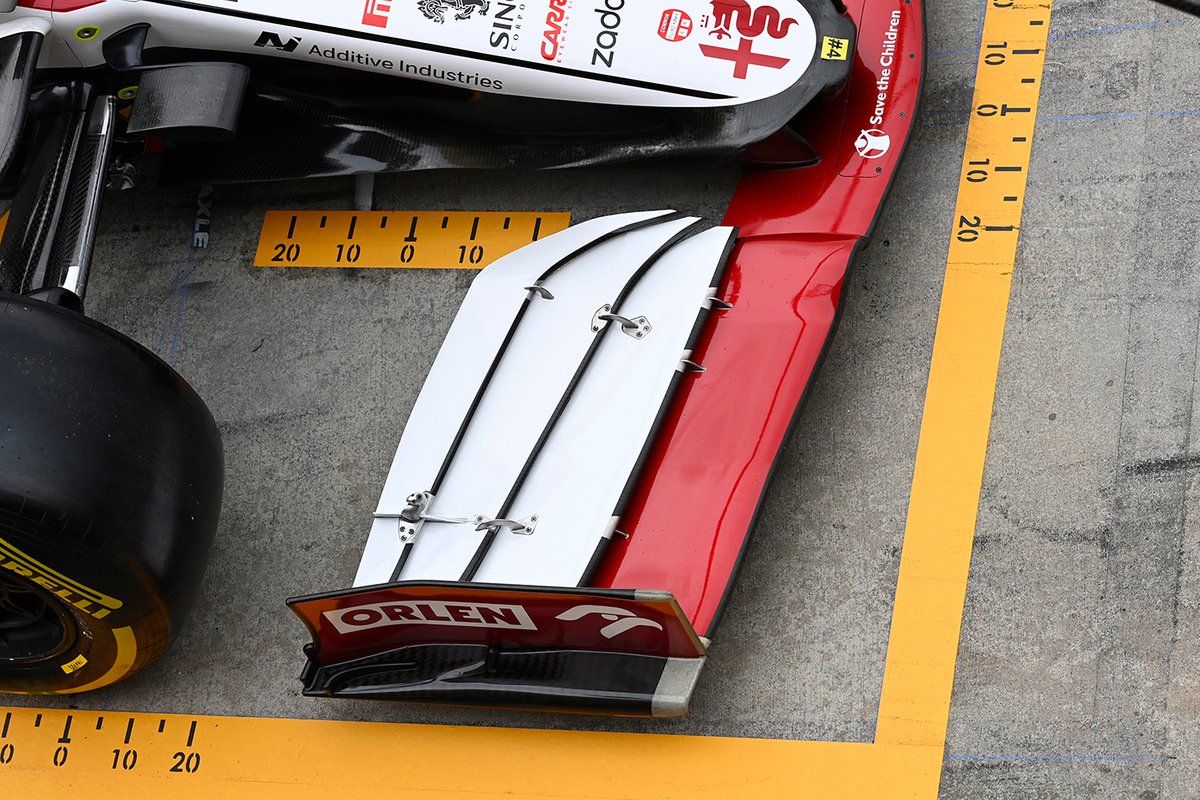 The bargeboard cluster on the Alfa Romeo C41 has various elements that make up the entire structure.