Lewis Hamilton thinks he was knocked unconscious after crashing out of the recent Belgian Grand Prix.

Cockpit replays of the incident, where the McLaren driver actually dented the Spa-Francorchamps barriers after clashing with Kamui Kobayashi, showed Hamilton completely motionless for 15 seconds in the wake of the impact.

The 2008 world champion admits it is possible he was knocked out. 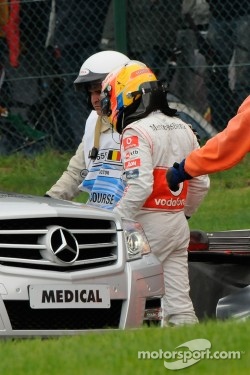 "I don't really remember much from hitting the wall," the Daily Star newspaper quotes him as saying at Monza.

"It's possible I was out for a couple of seconds, I'm not really sure."

The crash was the latest incident in a series for Hamilton this year, and he told the BBC 2011 might go down as the "worst" in his F1 career so far.

"I have got to find my way, learn from any mistakes and try to smooth out the creases through these last seven races," he is quoted as saying by the Guardian.

Hamilton, 26, said he has managed to avoid all the media speculation about his aggressive driving style since Spa.

"I don't read them, but I hear there are pretty bad stories written about me, so I am thinking it will be good to give you guys something good to write about me," he told reporters ahead of the Italian Grand Prix.

"I guess I'm an easy target at the moment because I'm always in trouble."

It's possible I was out for a couple of seconds, I'm not really sure

Some of his rivals defended Hamilton on Thursday, including Sauber's Kobayashi, who insisted F1 drivers "need to be aggressive".

Agreed Mark Webber: "He's not that aggressive, he's ok. He's just had a tough run in the last few races."

Hamilton's own McLaren teammate Jenson Button, however, admitted he doesn't always agree with his countryman's methods.

"I personally feel it's better to talk to the team than talk though the media, but we are built differently," he said.