Fernando Alonso and his wife Raquel del Rosario have announced they are splitting. 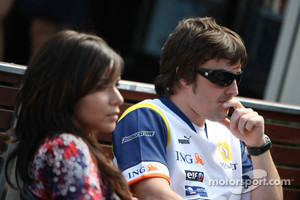 Then a Renault driver and reigning back to back world champion, Spaniard Alonso married del Rosario - lead singer for the Spanish rock band El Sueno de Morfeo - in 2006.

Earlier this year, 30-year-old Alonso - who now drives for Ferrari - moved from Switzerland to return to his native Asturias.

"We are separating from marriage, but never as friends", a joint statement issued by the couple said.

"We ask that the media respects our personal lives which, as you know, we have always been keen to protect."

Formula One - On And Off Track Week 51