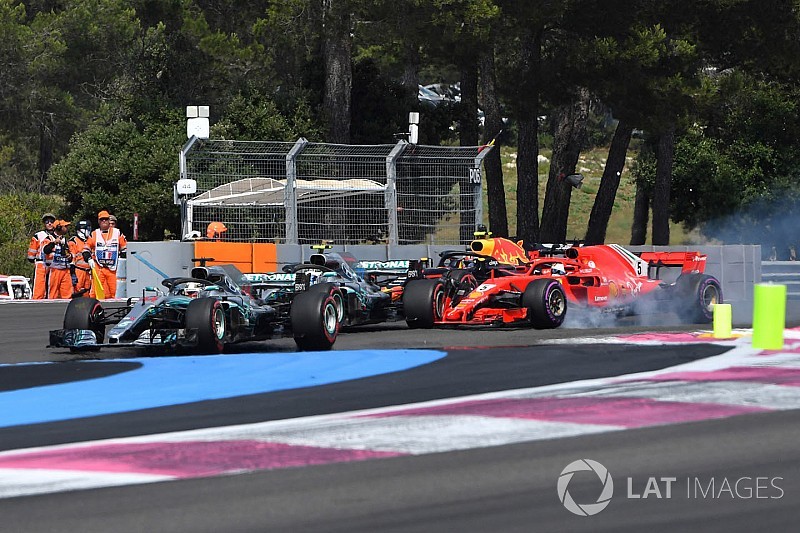 Good morning. Welcome to your morning Motorsport F1 Debrief from a French GP where traffic chaos was the talk of the weekend – both at the first corner and outside the track.

Sebastian Vettel’s clash with Valtteri Bottas on the first lap was the main talking point after the race, whereas most of the paddock chatter throughout the weekend was how the organisers had got it so wrong in trying to get cars in and out of the circuit. 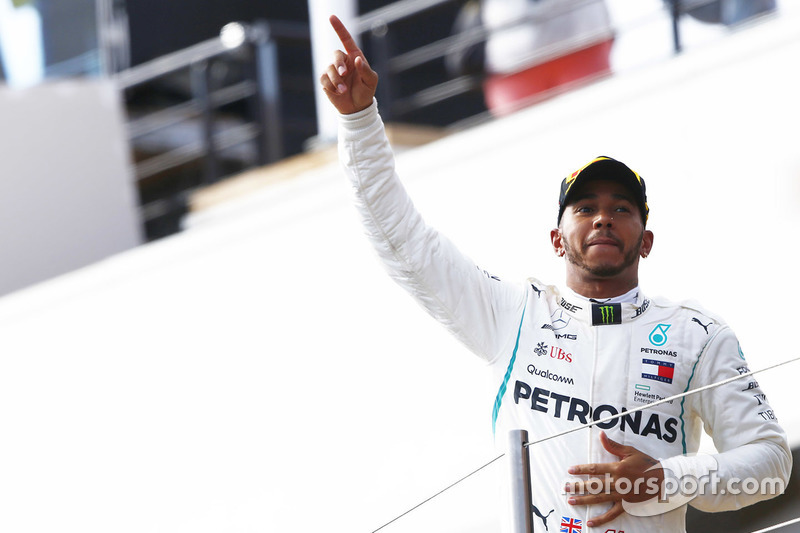 Lewis Hamilton, Mercedes AMG F1, celebrates on the podium after winning the race

Lewis Hamilton took his famous number 44 to his 44th win for Mercedes with a dominant victory at Paul Ricard that was helped by his closest rivals tripping each other up at the first corner.

The Briton had led away cleanly from pole position but it was Sebastian Vettel and Valtteri Bottas who clashed at the apex of the first left hander – effectively wrecking both their races.

From then on Hamilton was pretty much untroubled as Max Verstappen in second place never appeared to have the pace to properly challenge for the win. 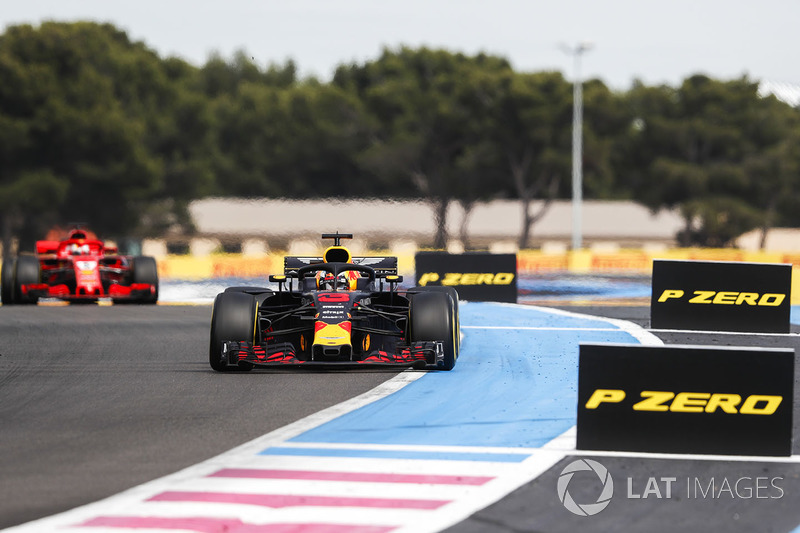 Kimi Raikkonen ended up on the podium, after Daniel Ricciardo’s hopes evaporated thanks to some front wing damage that left him with a ‘wounded’ car.

“Whether it was a failure or debris I don't know yet,” said the Australian. "But it happened and we were slow because of that. We had a lot less downforce and understeering, so with Kimi he was always going to catch us with that pace...we were a wounded car from just before the first pitstop.”

One man relieved to have finished in the points, though, was Carlos Sainz who appeared to have lost all hopes of a top ten finish when his MGU-K broke in the closing stages.

But he was saved by a late-race virtual safety car, caused by Lance Stroll’s tyre failure incident, which meant chasing cars could not chase him down from the eighth spot he was in.

DID VETTEL GET AWAY LIGHTLY? 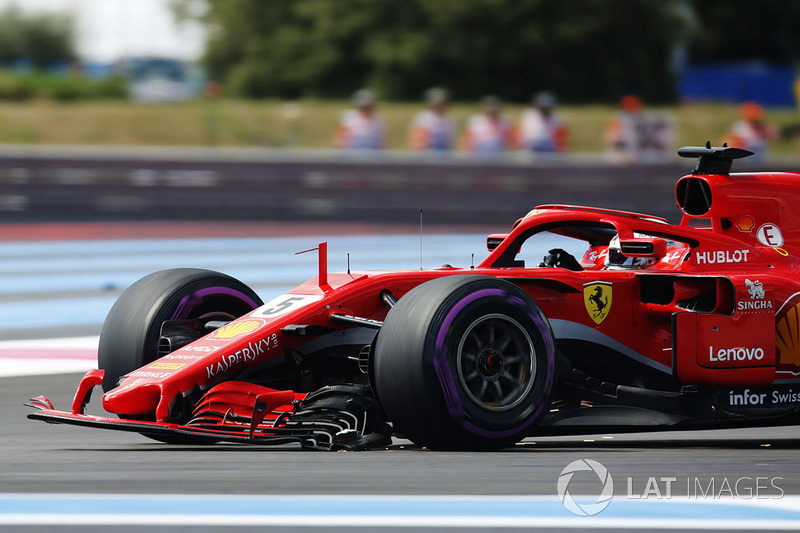 Sebastian Vettel, Ferrari SF71H, returns to the pits with a broken front wing

The most controversial moment of the race came at the first corner, when Sebastian Vettel slid into the back of Valtteri Bottas and wrecked both their afternoons.

While everyone was in agreement about who was to blame for the accident – with Vettel suggesting ‘too good’ a start had triggered things off – there was unhappiness from his rivals afterwards about how lightly he had got away.

The five second penalty, which Vettel took at his second pitstop, still allowed the German to finish ahead of Bottas at the end. That was something Mercedes in particular was not happy with.

Mercedes non-executive director Niki Lauda told Sky: “Why Vettel only gets five seconds for this enormous mistake I don't really understand. It is too little.

"There is more time they can give them. That is what I mean. Five seconds is nothing. He destroyed the whole race for himself and Bottas."

Race winner Hamilton later added: “We all went into Turn 1 as hard as we could. When someone destroys your race and then gets a tap on the hand, pretty much… they shouldn't be able to come back and finish ahead." 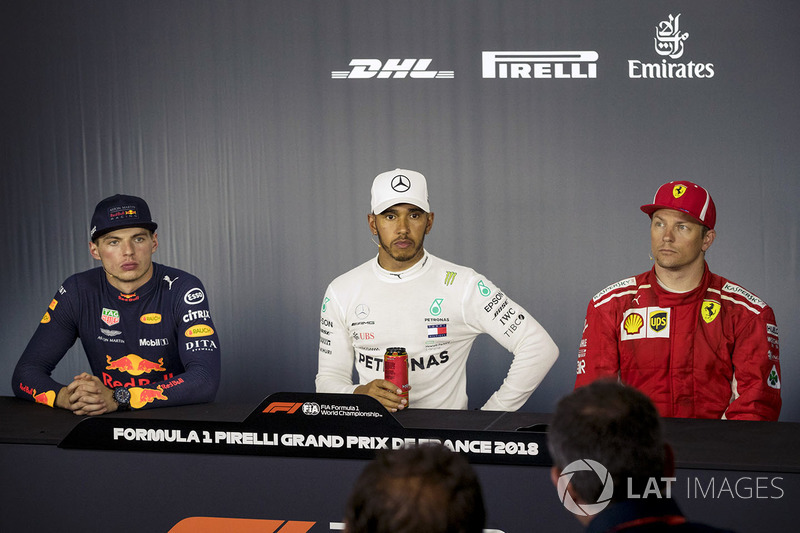 Max Verstappen was one of the biggest winners from the Vettel/Bottas clash – as it enabled him to move up to second place after the chaotic first corner.

But the Dutchman, who went on to finish as runner-up, was far from happy with the situation surrounding Vettel.

But rather than his anger being aimed at the Ferrari driver, or the FIA, he took aim at the media and his critics who were calling on him to change his approach after a spate of his own errors earlier this year.

"I think next time you see Seb, maybe you should tell him to change his style, because honestly it's not acceptable,” he told the press after the race.

"That's what they said to me in the beginning of the season so I think they should do the same [to him]. And of course, Seb shouldn't do anything, and just drive again, and learn from this, and go on.

"That's my advice to everyone in this room."

FRENCH DUO GET A SLAP OVER THE WRISTS 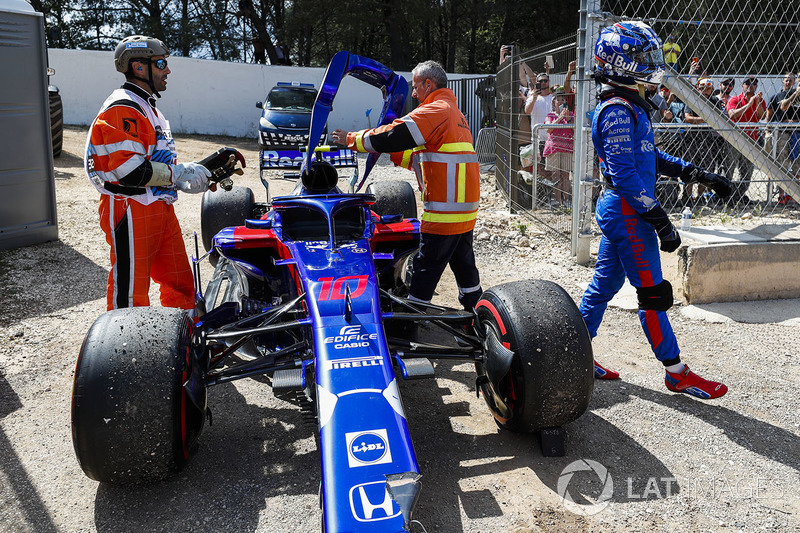 Marshals remove the damaged car of Pierre Gasly, Toro Rosso STR13, as he walks away

France’s return to the Formula 1 calendar has come off the back of the arrival of some pretty hot French talent.

It was little wonder then that local heroes Esteban Ocon and Pierre Gasly were pretty upset that their first ever home races was over after just a few corners thanks to a collision.

While both men blamed the other for what happened, the FIA decided that they were equally over optimistic – handing them a reprimand.

A statement from the stewards said: "The Stewards are of the view that both drivers made errors which contributed to the collision." 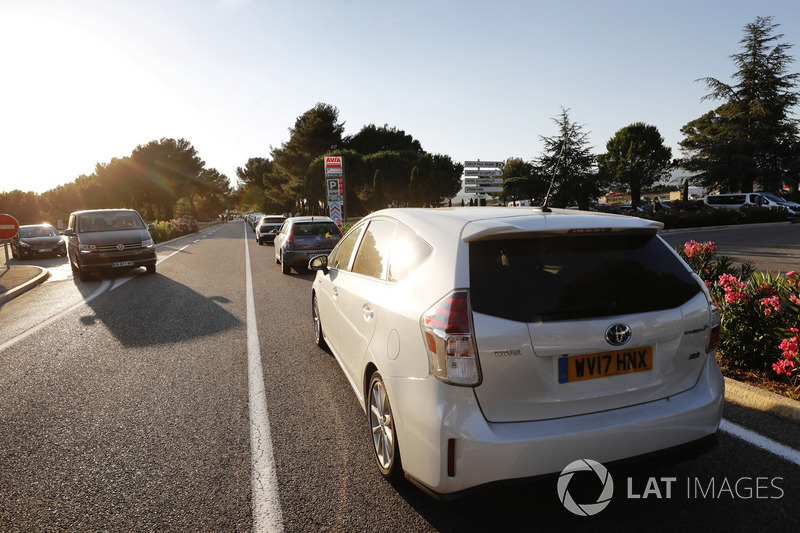 Traffic jams outside the circuit

While the on-track action got pretty close at times in France, off track it was bumper-to-bumper too as the weekend was overshadowed by traffic chaos.

Huge queues going into the track in the mornings, and leaving it in the evening, left fans, teams, drivers and media pretty unimpressed.

The chaotic situation (which included Robert Kubica being told he was not allowed to cycle in…) has at least prompted F1 chiefs to realise that something needs to be done for 2019.

F1’s managing director of sports Ross Brawn said he had some sympathy for fans who had given up trying to attend – and vowed to work with organised to make things better next year.

“It’s very frustrating for them, and I can understand that frustration," he said. "We’ll see what we can do in the future.

“Ourselves and the promoters will look at the situation after the weekend and work out how it can be improved. It’s a paradox, because it’s a measure of the popularity of the event.

"But what we don’t want to do is have fans put off because it becomes too much of an epic to get to and from the circuit. Anything we can do to improve that will obviously be to the benefit of everyone.”