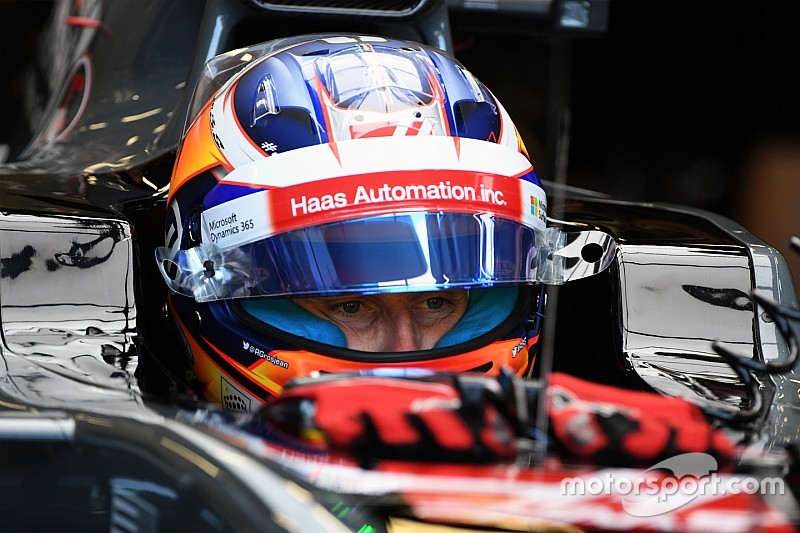 Haas driver Romain Grosjean has stated he is "fed up" with what he regards as a disproportionate focus by Formula 1's broadcasting on negative team radio messages from his side.

Grosjean has endured a particularly difficult Azerbaijan GP weekend so far, having suffered from a recurrence of long-standing brake issues throughout practice and qualifying.

The Frenchman, who qualified four places behind teammate Kevin Magnussen in Baku and is set to start the race in 16th, has had many of his radio transmissions featured on F1's world feed throughout the Azerbaijan GP weekend as he voiced his annoyance over brake problems and the resulting lock-ups.

But Grosjean, who had in the past admitted he was worried about coming off as an "asshole" due to the broadcasting of negative radio messages, has now suggested that he was being unfairly singled out.

Asked by Motorsport.com whether he felt his communications with the team were being put in the spotlight, he said: "Yes, and I'm very fed up with it.

"Everyone is saying things [on team radio], and when I'm saying things, it's just for the team, it's not for the outside world. It's our internal business, if I have rear locking and front locking or whatever.

"I've been broadcast much more than others and I'm pretty sure others have been swearing and not being happy sometimes.

"I just feel that they have been a bit unfair and I'm tired [of it]."

During his first season with Haas in 2016, Grosjean said he would attempt to be "a little bit more quiet" in communicating with the team "because it was playing on TV and people who don't know, they think it's wrong".

A year on, he insists he has indeed made an effort to tone down his messages, but he believes they continue to be picked up by the world feed because his continuing brake issues have been a "sketch".

"It's a sketch because it's been a year and a half. But things should be better soon."

For his part, team boss Gunther Steiner again backed Grosjean, saying the outbursts on the radio were no issue.

On the matter of Grosjean's radio messages being unfairly singled out, Steiner joked: "It's like we wait after until Romain is on the radio, 'boom, straight into it', they cannot wait.

"But, again, if you take the positive side, it's like they broadcast him all the time. Is it bad, is it good, I don't know - it's a very strange thing."

He continued: "The thing is, nobody knows him like we know him. He has got this moment and afterwards he comes in and says 'hey guys, sorry I didn't qualify better but I just can't deal with this'.

"As long as he's not disrespectful to any one person, I find - you know, when you get personal, then it's not good anymore, in my opinion.

"He never has a go at a guy. When you start effing and cussing at a person, then I would say 'it's enough now'. But he's frustrated about something that is happening to him, not about a person.

"Could he avoid it, would it be better for him? Maybe, yes, but he is to judge. He is human so I'm not judging him on that one.

"I am fine as long as he doesn't insult anyone personally. If in that you get rid of your frustrations, if that is the way out, why not?"

Horner: Red Bull has nothing to fear from cost cap