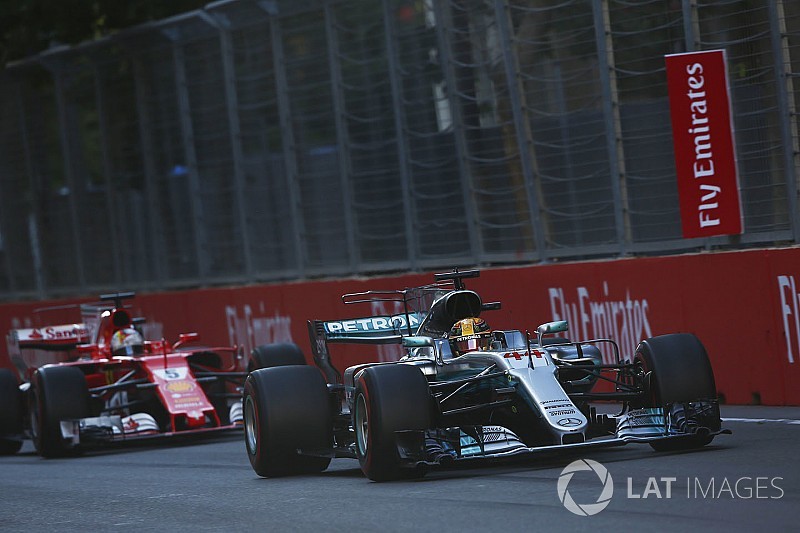 Stewards at F1's Azerbaijan GP found no evidence in telemetry data of Lewis Hamilton either brake-testing or lifting off unexpectedly in his clash with Sebastian Vettel before Sunday's second safety car restart.

Although Vettel is adamant that he was brake-tested on the exit of Turn 15 prior to him making contact with the rear of the Mercedes, analysis of data from Hamilton's car by the FIA showed no proof of that.

The FIA investigation, which took place during the course of the race, threw up no suggestion that Hamilton had braked nor lifted off entirely.

Furthermore, analysis of how Hamilton had behaved in the first safety car restart, and the one after the incident, showed that the British driver had behaved exactly the same at that point of the track as he prepared to get back up to racing speed.

For with a long run up between the following Turn 16 and the safety car line, he had to back off to ensure that he did not break the rules by overtaking the safety car before he was allowed.

Vettel remains adamant, however, that Hamilton did not behave in the right way and that he was brake tested.

"Well we know the leader dictates the pace but we were exiting the corner," said Vettel. "He was accelerating then he braked so much that I was braking as soon as I saw, but I couldn't stop in time and ran into the back of him. I just think that wasn't necessary."

Vettel was later handed a 10-second stop-go penalty for having driven in a 'potentially dangerous' manner when he banged wheels with Hamilton as he vented his anger at his world championship rival.

Again, Vettel's perception of what happened was in contrast to the FIA, whose analysis of footage showed that the German had turned into the Mercedes car.

The stewards explained: "The Stewards examined video evidence which showed that car 5 drove alongside and then steered into car 44. The Stewards decide this manoeuvre was deemed potentially dangerous."

Speaking about that moment, Vettel said: "I drove alongside, then we had a little contact but I drove alongside mostly to raise my hand. I didn't give him a finger or anything, I just wanted to tell because I can't literally talk to him that that was not right."

Vettel was also given three penalty points for the incident with Hamilton, which means he now has a total of nine for the past 12 months.

He is now just three points away from a race ban under F1's totting up protocol, thanks to three other offences he committed in 2016.

However, the two penalty points he got at last year's British Grand Prix, for running Felipe Massa off the track, will be wiped away if he does nothing wrong in the next race.

With them due to expire on the Monday after the Austrian Grand Prix, Vettel will need to ensure he does not get any more penalty points at the Red Bull Ring.