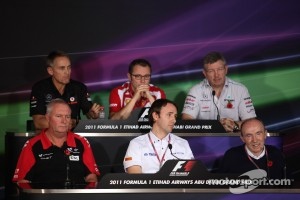 The Geneva based alliance has lost the support of top teams Red Bull and Ferrari, and also smaller outfits Sauber, Toro Rosso and HRT.

It is rumoured Lotus could be the next to go.

"We believe it's a great shame that we've lost some of the members from FOTA because I think we may live ultimately to regret that," he is quoted by Sky Sports.

Contemplating the reasons for the FOTA split, Brawn explained: "When there is outside pressure it pushed FOTA together. Now, there is not so much, the natural competitiveness of the teams is pushing it apart a bit.

"I hope we don't regret it ... because one of the objectives was to find the right solutions for F1, not just for individual teams."

Formula One - On And Off Track Week 8