Monaco is a race like no other, the cars' close proximity to the barriers combined with the lowest average speed around the tight and twisting Monegasque streets making it a sight to behold.

And that is especially the case now that the cars are 200mm wider, posing several unique technical challenges for the teams.

The Scuderia has now proven that the SF70H is comfortable under numerous conditions and able to extract performance from the Pirelli tyres better than their closest rivals.

Even so, the team arrived with a new brake drum design, in order to extract the most from the tyres around the narrow street circuit.

This was perhaps most noticeable in qualifying when the drivers were able to bring the tyres immediately up to temperature and start with a quick lap, whereas their closest rival - Mercedes - was forced to do a secondary tyre temperature preparation lap. 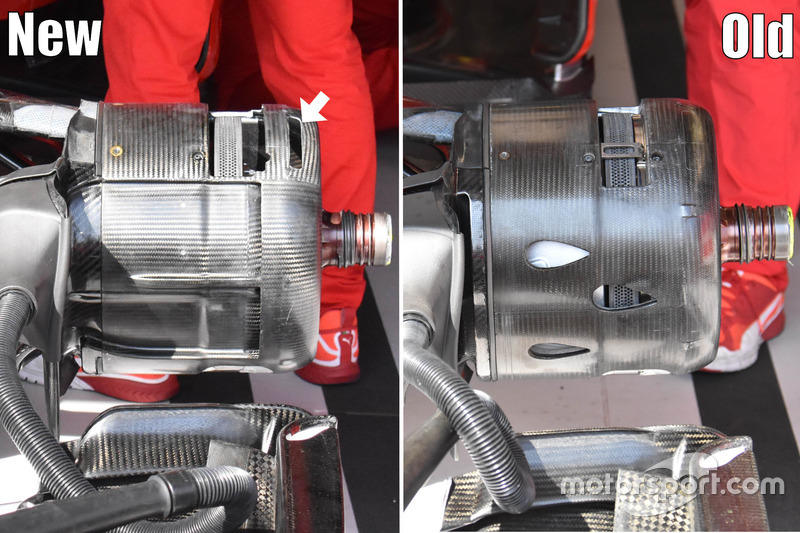 As is always the case, the drum's design caters for the displacement of heat generated by the brakes, with the additional slot found on the outer section (white arrow) opened up.

Meanwhile, the teardrop-shaped holes usually placed in the drum were replaced by a pair of cooling inlets, which seemingly draw air inbetween the main vertical fence and edge of the tyre and feed it inside the drum to cool things down, before being ejected out of the wheel face. 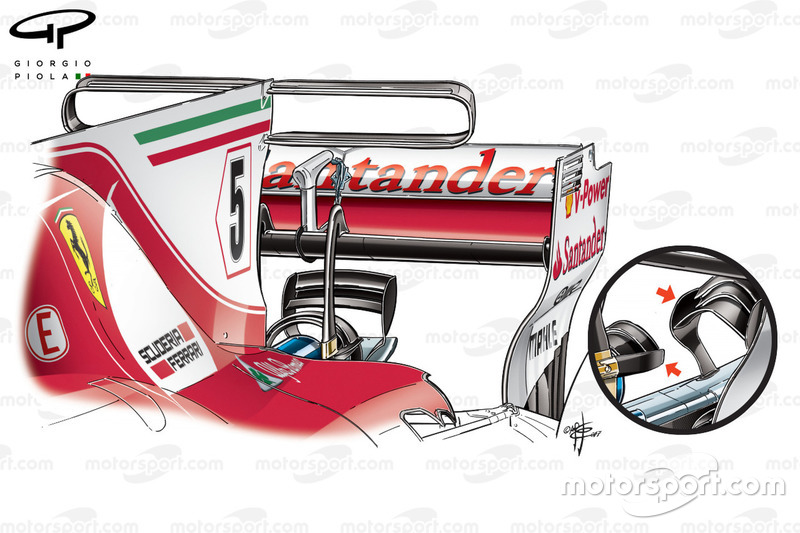 The team had some other subtle changes to take on the unique challenges of Monaco, with revisions to its monkey seat designs changing the rear end's aerodynamic working range.

With speeds much lower around the streets of the principality, the trade-off between mechanical grip and downforce is lower too. As such, teams utilise revised monkey seat designs to help with the interaction of the diffuser and rear wing's aerodynamic structures. The rear wing itself is also run at a steeper angle of attack to improve downforce.

Ferrari’s primary monkey seat, mounted atop the crash structure, saw its shape revised for Monaco while the three tier winglet seen at Barcelona (inset) was replaced with a two-tier one.

The exhaust wrapping monkey seat was also revised, as the winglets were extended further around the exhaust, the team looking to leverage the plume being dissipated by it.

You'll also note that the team retained its new T-wing design introduced at the last round in Spain. The design features two elements, rather than one, both of which have full-length slots placed in them before they meet with the hooped outer section. 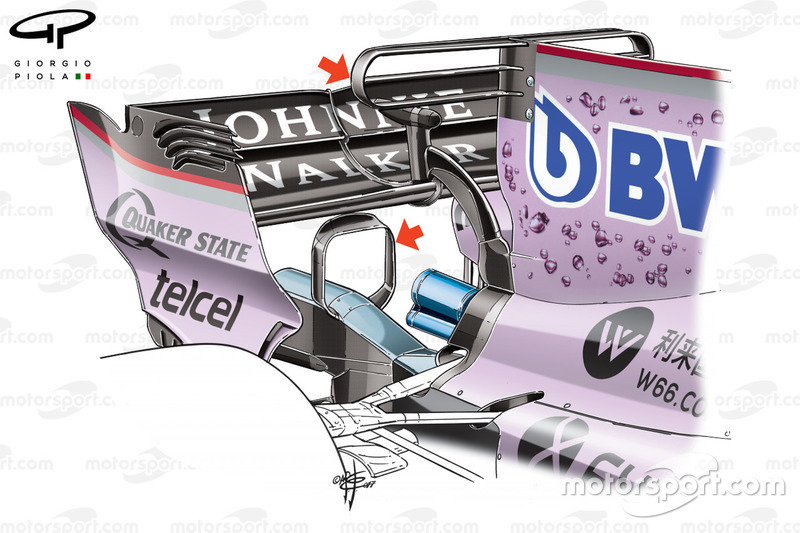 Seven F1 teams had previously jumped on the T-wing bandwagon, but at Monaco we got a full house when Force India, Renault and Red Bull joined the ranks.

Andrew Green’s design team may have waited till round six of the championship to apply its version of the controversial winglet but as always, when it did arrive, it arrived with serious aplomb.

However, the designers have made space for another element right in the centre, making it a three-element winglet.

The team also introduced a slimline monkey seat (arrowed) for Monaco in an effort to change the working range of the aero at the rear of the car. 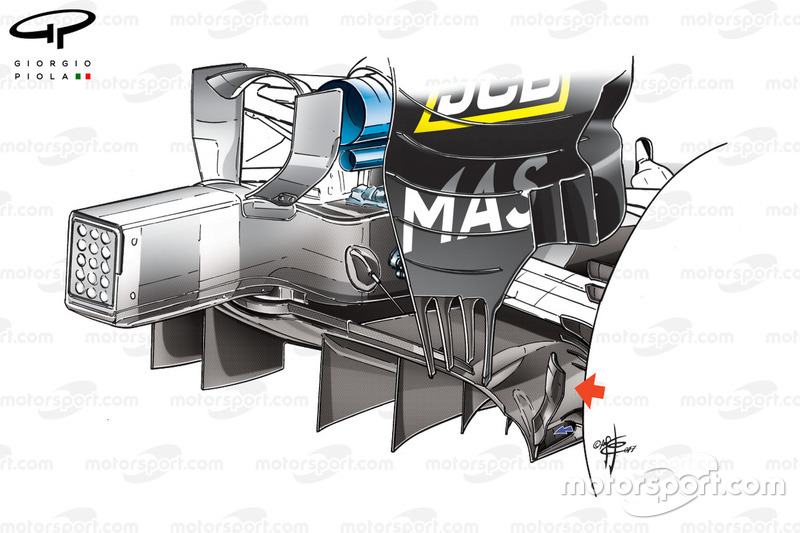 Williams' surge toward the front of the grid in the early stages of the hybrid era has come to a halt and the team now finds itself in reverse.

So far this season, the team has struggled to find the necessary downforce gains needed and laboured over the operation of this year's Pirelli tyres.

For Monaco, the team looked to improve the rear of the FW40 with a re-design of the upper, outer surface of the diffuser. Having favored having a vertical winglet on the corner of the diffuser for a number of years now, the team optimised the layout for Monaco, introducing a much taller version (red arrow).

The winglet creates an adverse pressure gradient in order to pull airflow out from the diffuser's outer section but also protect the diffuser from the wake generated by the rear tyre. 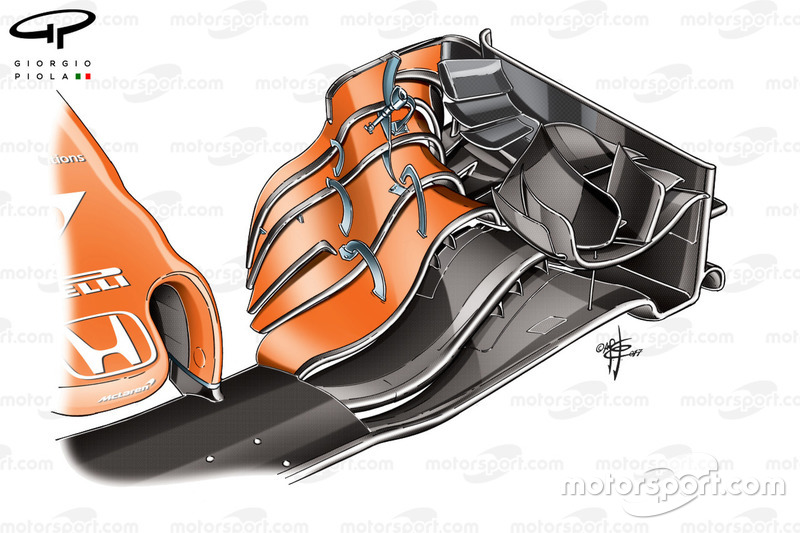 McLaren introduced this new wing at the last round in Spain, but with just the one available, only Fernando Alonso got to sample it.

In Monaco the team had a few prepared, furnishing both Jenson Button and Stoffel Vandoorne with the design.

The revisions centre around how airflow is directed by the wing out around the front tyre, with alterations to the shape of the arc on the outer section of the mainplane and, more importantly, a change to three endplate canards, rather than a single one on the inside of the endplate.

The team also made further revisions to their bargeboards and diffuser, with an additional slot in the vertical surface and a pronunciation of the slots in the footplate of the former, while the latter was revised around the outer section with a new rearward footplate added.

Analysis: Why Mercedes' tyre struggles might continue past Monaco