Rubens Barrichello was the only AT&T Williams driver to see the chequered flag in Sunday's Brazilian Grand Prix. He came home in 14th position after a tenacious drive in front of his home crowd. Pastor Maldonado spun out of the race while on a charge through the field. Mark Gillan, our Chief Operations Engineer, gives us his thoughts on the season finale.

Q: How would you sum up the pace of the FW33 at Interlagos?

MG: Overall the base pace of the FW33 at Interlagos was similar to that of the past few races, being effectively the 8th quickest team. 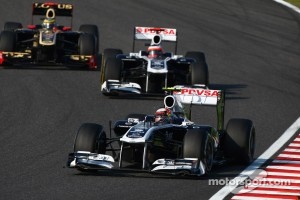 Q: Rubens qualified 12th, just 0.3 seconds shy of a slot in Q3. How good was his performance?

MG: 0
It is fair to say that Rubens extracted close to the maximum ultimate performance out of the car on that lap - it was an impressive time and gave the team a welcome lift.

Q: How did Pirelli's soft and medium compounds perform, and what was the lap time difference between each?

MG: single laptime difference between the medium and soft compounds was about one second in favour of the soft tyre and about 0.5 seconds during a longer run. During the race, tyre life was lower than expected and we ended up having to switch from our planned two-stop strategy, to a revised three-stop strategy.

Q: Rain was forecast for Sunday, but it never materialised. How did that impact on the drivers' races?

MG: The long, medium and short term forecasts for the race all consistently predicted an 80% plus chance of rain during the race. Throughout the race the weather radar highlighted that the rain was closing into the circuit but it never actually materialised. Both cars had a few minor modifications to the race set-up, which were biased towards better driveability should we have had a wet race.

2011 has been a difficult, character building season for the team

Q: Pastor spun out on lap 26. Had he been struggling with the car prior to that moment?

MG: Pastor had been held up for seven laps by Bruno Senna, whom had been struggling with a damaged front wing. Pastor managed to pass Senna on lap 26 and then pushed very hard to recover some lost ground. Unfortunately he ran wide at Turn 7, spinning off, having lost the car under braking.

Q: The 2011 season is now finished. How would you sum up the season for AT&T Williams?

MG: 2011 has been a difficult, character building season for the team. With the new technical management team in place since September, it has been critically important that we learnt as much as we could in the closing stages of the season about the inherent design, build and performance deficiencies of the FW33 to ensure that the FW34 is a much better car come the start of the 2012 season.Q: How is work progressing on next year's FW34?

MG: Work is progressing well on the FW34 and we continue to meet both our key performance, development and production targets. As a team we have a massive task ahead of us but everyone is absolutely resolute that we do not have another season like 2011 and we all look forward to better times ahead. Of course, the proof of how well we do is simply measured on our final Constructors' position and the number of championship points that we have come this time next year!