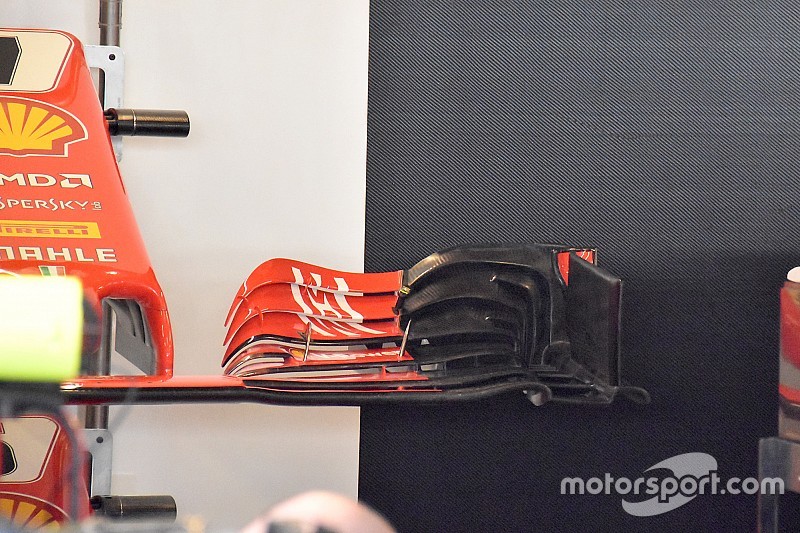 Formula 1 teams have faced a headache in trying to evaluate the wider and simpler front wings because they do not comply to the current regulations, so cannot be used in a free practice session.

Furthermore, the FIA told teams that they would not be given any special dispensation to run the wings in next week's post Abu-Dhabi Grand Prix test.

However, as the above exclusive photograph shows, Ferrari has decided to create a bespoke wing for the Abu Dhabi weekend that should help it evaluate the impact of the changes being made for 2019.

The new wing complies with the dimension requirements of the current rules, but has been adapted to simulate some of the restrictions that are coming in for 2019 – including much cleaner endplates to minimise the effects of outwash.

Although the FIA remains hopeful that next year's aerodynamic changes will help boost overtaking for 2019, some teams are not convinced.

Williams engineering chief Rob Smedley said recently about the idea that F1 cars could race as closely as touring cars: "It just won't happen, physics won't allow that to happen," he explained.

"So, you have to accept that cars are difficult to follow – especially with this generation of cars and the amount of downforce that they generate.

"It will be a little bit better, it will go in the right direction, but we'll all iterate to solutions to get us back to where we are in about six months."

Alonso admits he might get "desperate" to return to F1