Ferrari appears not to have given up in its attempts to block its on board camera from capturing car settings, despite being told by the FIA to stop using a cooling bag. 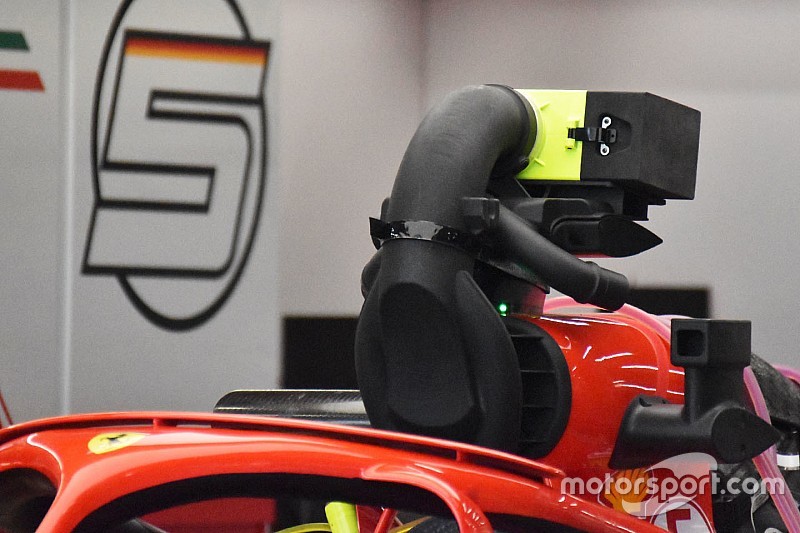 The Maranello-based team caused intrigue in recent races when it started putting a bag filled with dry ice over the camera when the car was in the garage or on the grid.

While the team claimed the move was in a bid to cool car and camera electronics, rival teams suspected that an ulterior motive was to prevent the onboard camera from filming car settings – either on the steering wheel or at the back of the car.

Rival teams have access to the onboard cameras from all cars, and there are competitive advantages to be had if the opposition knows what Ferrari is up to.

With FOM not happy about Ferrari cooling its camera equipment, the FIA notified Ferrari ahead of the Italian Grand Prix that it should stop using the cooling bag with immediate effect.

Ferrari was duly spotted on the grid at Monza using an umbrella to try to block the camera view.

Ahead of the Singapore Grand Prix, Ferrari has been spotted with a newly-designed airbox cooler which features several appendages that also appear to block the camera view.

While the team will likely argue that the device acts in the same way that other teams' airbox coolers do, it is almost certainly no coincidence that it is shaped in such a way that the camera's view of the steering wheel appears to be shut off when it is fitted.

The engine tech that will define F1's next aero war