Ferrari F2005 to race in Bahrain

Scuderia Ferrari Marlboro will line up with the F2005 for the Bahrain Grand Prix, which takes place at the Sakhir circuit on 3rd April. The decision was taken this morning in Maranello, after analysing data from the last three days of testing at ...

Scuderia Ferrari Marlboro will line up with the F2005 for the Bahrain Grand Prix, which takes place at the Sakhir circuit on 3rd April. The decision was taken this morning in Maranello, after analysing data from the last three days of testing at Mugello. 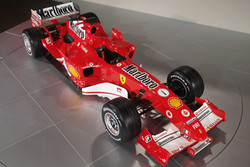 "In the next race we will be running with the new car," commented Ferrari Managing Director Jean Todt. "The Mugello test, which saw both race drivers try the F2005 for the first time, confirmed its potential."

"We will have two F2005, one for each driver, while the for the spare, we will use one of the F2004 M used in Australia and Malaysia. The contrasting results of the first two races gave us a positive incentive."

"Along with Bridgestone, we decided to accelerate the development programme and we believe that the combination of various new elements -- car and tyre -- will allow us to move back on the attack after two Grands Prix on the defensive."

"I have to say I am very happy with the way the team and all our partners have reacted to try and quickly return to our true level of competitiveness."