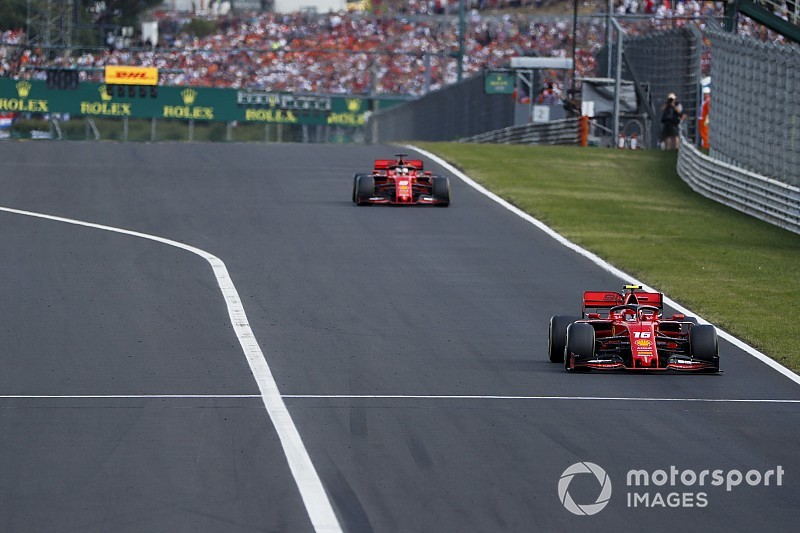 Ferrari believes its weakness when Formula 1 teams are running maximum downforce is more exposed in race trim, which is why it "suffered" more in Sunday’s Hungarian Grand Prix.

Sebastian Vettel and Charles Leclerc finished third and fourth at the Hungaroring but both drivers were more than a minute behind race winner Lewis Hamilton’s Mercedes and more than 40 seconds behind Max Verstappen’s Red Bull.

Ferrari’s decision to prioritise aerodynamic efficiency with the concept of its 2019 car has left it vulnerable at circuits that require peak downforce levels.

Team principal Mattia Binotto suggested that the one-minute gap to Hamilton was not as significant as the massive shift in performance from last week’s German Grand Prix, where the Ferrari was fastest.

“What we should try to explain is not the minute [Ferrari was behind] but maybe a week ago we got the fastest car and [in Hungary] we’re somehow not the fastest,” said Binotto.

“And you’re suffering more in the race than in the quali because in the single lap of the quali, eventually the grip of the tyres is coping with the lack of downforce you have.

“On a long distance you’re sliding, overheating the tyres, and things are certainly more complicated.”

The Ferraris faded from the lead battle early during the grand prix as Hamilton and Verstappen engaged in an exclusive, race-long duel for the victory.

Vettel and Leclerc did not think that the intensity of that lead fight exaggerated the gap either.

Leclerc added: “No, I don’t think so either. We were pushing at the maximum to try to have our best race.”

Vettel added that he was not surprised to be so far behind and described the gap as “fair”.

“I think some tracks you know maybe suit you, some maybe less,” he said. “Despite that I think I was fairly open-minded and you don’t want to accept that.

“So I tried everything to prove the opposite. But looking now, after qualifying, we simply didn’t have the pace of those two in particular.”

Verstappen vs Hamilton: A glimpse into future battles?

Russian GP qualifying as it happened

Russian GP qualifying as it happened