Fernando Alonso and Felipe Massa completed 47 laps, 23 for the former and one more for the latter.

Interlagos - While some on-line weather sites were still showing glorious sunshine for Interlagos today, the more experienced hands in its cramped and crowded paddock all made sure they went home with their rain jackets last night. 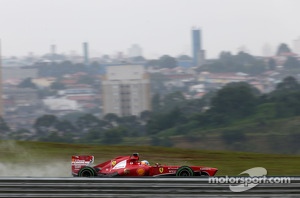 Sure enough, Friday dawned damp and cooler than the past couple of days and the track surface never dried enough for any slick tyre work at all. Just as in Spa-Francorchamps, the rain is almost an essential ingredient of the Brazilian GP weekend and all the teams know how to deal with it.

The only difficulty is that there is not an endless supply of rain tyres to play with and each driver gets just three sets of the Extreme Wets, for use in heavy rain, to last the entire weekend.

With more wet weather almost inevitable, the need to do plenty of laps, to gather data for the engineers and confidence in the track for the drivers has to be tempered with the need to save the Extremes, if they are needed for the critical qualifying session tomorrow afternoon and of course the final race of the season.

That’s why Fernando Alonso and Felipe Massa completed a mere 47 laps, 23 for the former and one more for the latter, of the tiny track, which although not the shortest, that honour going to Monaco, does produce the fastest lap of the season in dry conditions.

Even in the rain, there was a decent crowd today and they no doubt enjoyed seeing Felipe sporting a special red helmet decorated with all the landmark numbers from his Ferrari career, as well as a race suit the design of which reflected his time with the team as well as his nationality. The Brazilian ended the day seventh fastest, four places ahead of his Spanish team-mate on the time sheet.

Nico Rosberg was quickest for Mercedes – in both sessions in fact – while Sebastian Vettel and Red Bull team-mate Mark Webber were second and third in the afternoon.

Fernando Alonso: “It’s always hard to get much running when it rains here, as the level of water on track is never consistent and can affect lap times by two to three seconds. Each time you go off the racing line you then have to try and understand the track conditions at that precise moment, because there are no absolute values. But given that the forecast for the weekend is similar to today’s, we can say that, even if it was short, it was a good practice.

Qualifying and the race will be very complicated from the strategy point of view and, on that front this evening we will have to come up with a good plan. To do well here, you also need a bit of luck, because in conditions like this, being in the right place at the right time is always a help.”

Felipe Massa: “Today was a difficult day, complicated by the rain in both the morning and afternoon. With the track wet throughout, we chose to do not much running and what we did was on Intermediates. That way we managed to save the sets of Extreme Wets, in expectation of very variable weather over the weekend. It’s hard to establish how the weekend will go, because even if we weren’t quick today in the rain, it’s too early to say what conditions will best suit our car.

It will definitely be important to use the tyres well and to get confident with the track. For me, this is a very special weekend, my last race with Ferrari on my home track. I am racing here with an all-red helmet and a fantastic race suit, given me as a sign of affection by my team, with whom I hope to end the season in the best way possible.”

Pat Fry: “On Friday, it’s always difficult to work out the hierarchy in the pit lane, especially in mixed conditions like today’s. In the morning we carried out some practice starts, as well as pit stops and constant speed runs, which will provide useful data when it comes to working out the best set-up for the wet. As it is also expected to be wet tomorrow, in the second session, we opted to save the tyres, only going out for the final half hour.

Even if the total number of laps over the two sessions is not enough to give an accurate picture of where we stand in terms of our competitiveness with other teams, I don’t expect anything very much different from the last few Grands Prix. This evening we will try and evaluate our performance as well as possible compared to the opposition and will prepare to get everything out of the car both in qualifying and the race.”