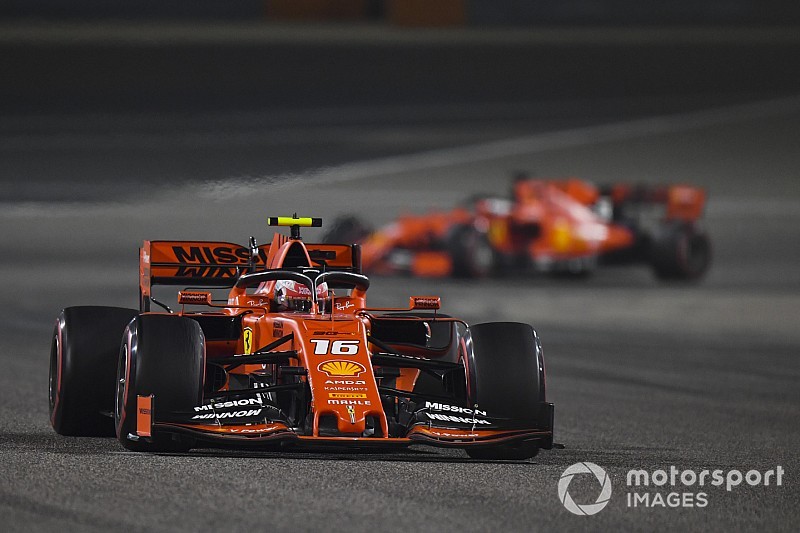 Mercedes boss Toto Wolff thinks rival Ferrari lost important "momentum" for its campaign with its defeat back in Bahrain, when Charles Leclerc suffered late-race heartache with an engine problem.

Ferrari had come into the 2019 season as favourite after showing strong pace in winter testing, but it is still without a win.

The Italian outfit first stumbled in Australia when it got its set-up wrong, but it then looked all set to bounce back in style in Bahrain when it delivered the fastest car and Leclerc appeared on his way to a maiden win.

However, with just more than 10 laps to go, Leclerc suffered a short circuit within his injection system control unit and his pace fell away – leaving the way open for Lewis Hamilton to take the victory.

Reflecting on the campaign and the dominance of Mercedes, Wolff thinks that the Bahrain defeat proved especially costly for Ferrari – which has seen other opportunities slip through its fingers too.

"I think somehow the momentum that Ferrari had in Bahrain was lost because they had the quickest car and they should have won the race with Leclerc," Wolff told Motorsport.com in an exclusive interview.

"Charles was the quickest guy in Baku, before his crash in qualifying, and Sebastian was in the lead in Montreal before the penalty came. So it could easily have been very different based on pure performance."

Wolff also insists that its pre-season concerns about Ferrari's form were genuine, and that there was no suggestion of his team having sandbagged in early running with its car.

Although Mercedes' situation at the first test looked worse than reality, because the outfit was only running an interim car, Wolff says concerns grew at the second test when its definitive W10 did not work as expected.

"I was worried," he admitted. "I wasn't worried in the first test, because in the first test we saw very impressive Ferrari. When you stood out on track, you could see the braking into Turn 1, and Turns 2 and 3. They were mighty.

"You could see on track that the Ferrari was really good, but then I knew that we would bring an upgrade package that would completely change the car. And we put it on the track on the Monday and it didn't correlate, and on the second day it didn't correlate.

"We thought we had a real problem there. But it all changed on the third day when the car somehow came together. And on the fourth day when we were equalling Ferrari's time, it was the first time in the eight days of testing we had the feeling that there is a path that seems sensible."

Stroll admits Q1 exits "a pain in the arse"