Ferrari has "overwhelming" evidence that Vettel broke no rules 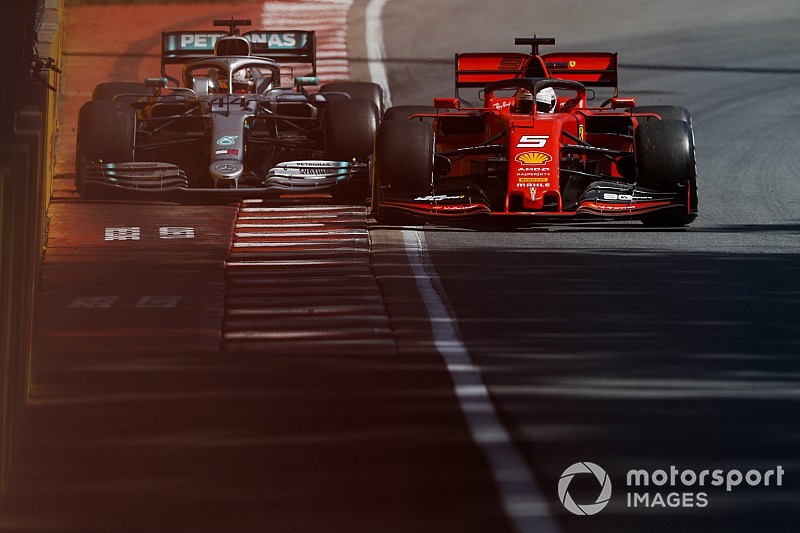 Ferrari believes it has "overwhelming" evidence in its favour ahead of a hearing to discuss its request to review Sebastian Vettel's penalty in Formula 1's Canadian Grand Prix.

A hearing is due to begin at 14.15 local time in France between the Canadian GP stewards and Ferrari representatives to discuss whether the stewards should revisit the decision to penalise Vettel five seconds in Montreal which cost him victory.

Ferrari's bid to review the case is rooted in its belief it has new and relevant evidence not available to the stewards at the time.

This is believed to include GPS data, telemetry and Vettel's witness testimony.

Speaking ahead of the hearing at Paul Ricard, which is taking place between the two Friday practice sessions, sporting director Laurent Mekies said: "The first thing we'd like to underline is we very much respect the work of the stewards.

"We know it's a very difficult job. It's a complex world, complex races, and therefore we are fully supportive of what they are trying to achieve. Now, in the aftermath of the grand prix, we have access to a number of new evidence.

"We looked at [the evidence] and for this reason and we have requested the FIA's right of review because we believe that this evidence is quite overwhelming when it comes to establishing that Sebastian did not breach any regulation."

Mekies would not comment on what evidence Ferrari has.

"I think going further would be inappropriate because the hearing will be this afternoon," he said. "Again, we are fully supportive of that process."

Asked if he thought "overwhelming evidence" meant it would be enough to get Vettel's and Ferrari's first win of the season back, Mekies said: "That's very much the part it wouldn't be appropriate to go through now.

"We are very respectful of the FIA process and we'll be meeting with the stewards. We can probably have these discussions next weekend [in Austria]."

If Ferrari is successful in its bid to get the stewards to review the incident, and the penalty is overturned, its first win of the season would not make a drastic difference to the championship standings.

Lewis Hamilton, who inherited the win, would still have a comfortable lead in the standings but it would be reduced to 22 points over teammate Valtteri Bottas.

Vettel would move to 107 points, 48 points behind Hamilton – instead of the 62 he currently trails him by.

Meanwhile, Ferrari would have 179 points in the constructors’ championship to Mercedes’ 288, compared to the current 295-172 score in Mercedes’ favour

Hamilton under investigation for Verstappen incident