Ferrari's range of reliability problems this season is "even more worrying" than if its Formula 1 design had a core underlying issue, says team boss Mattia Binotto. 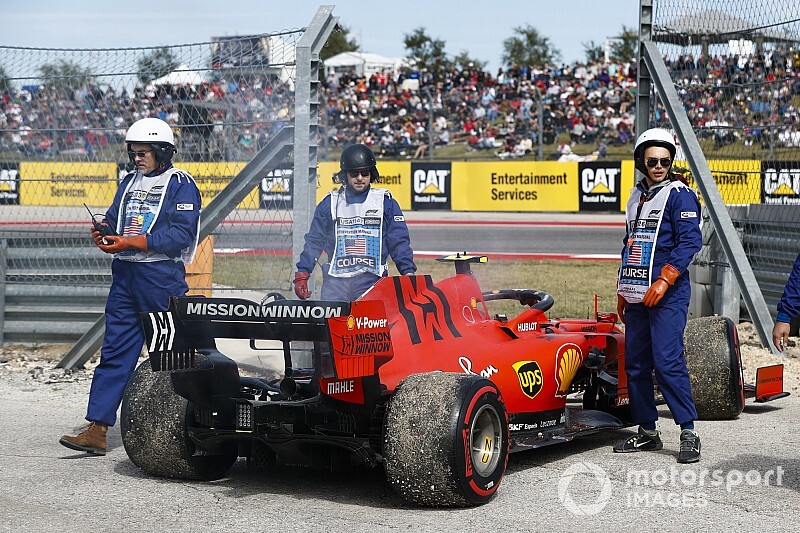 Engine reliability problems hindered Ferrari's victory bids in Bahrain, Austria, Germany and Russian, while Charles Leclerc will take a grid penalty at the Brazilian Grand Prix after a problem he suffered in the United States two weeks ago.

Binotto, who was speaking before the US GP weekend where Leclerc encountered a problem with his Spec 3 engine in final practice, told Motorsport.com: "We had Bahrain with Charles, we had problems in qualy in Austria with Sebastian [Vettel], then qualy both cars in Germany, then we had the problem in Sochi.

"All of them, each single one, all different. It's not a single factor or commonality, which is even more worrying.

"Because if you've got one single problem you may address it. The fact we've got different problems is showing our entire process is not strong enough towards reliability."

Despite matching Mercedes for nine poles this year Ferrari has only won three races, while Mercedes has racked up 14 victories and a sixth consecutive title double.

Ferrari's title-less run now stretches back to its constructors' championship success in 2008.

Binotto added: "What we need is to improve our reliability. If we would be more reliable, we would have more victories. And I think that is the key point for us.

"Looking at the future, to become world champion, we must become more reliable than we are at the moment."

Binotto said that is something that "takes time", although problems emerging as early as round two in Bahrain, where Leclerc lost victory late on, means Ferrari has been working on solutions for several months.

"It's down to the designers first, it's down to the way you homologate and the risk assessment you take in terms of development towards the reliability, so it's an entire philosophy," Binotto said.

"So it will take some time. But since we've had the problem already in Bahrain we've tried to put effort into improving it."

Speaking after the US GP, in which Vettel suffered a suspension failure, Binotto also pointed out that Ferrari's deficit to Mercedes went beyond reliability.

"To beat them is difficult," said Binotto. "It is not only pure performance, it is reliability, it is mentality, it is strategy, it is pitstops.

"We have a benchmark. We are improving ourselves and we have improved all through the season but we are not yet where we should be.

"It is not easy to achieve them but still there is the winter time to try to work as hard as we can, as well as we can."