Ferrari says its reduced straightline speed at the Brazilian Grand Prix was down to an aerodynamic configuration that meant it "almost matched" Formula 1 rival Red Bull in the corners. 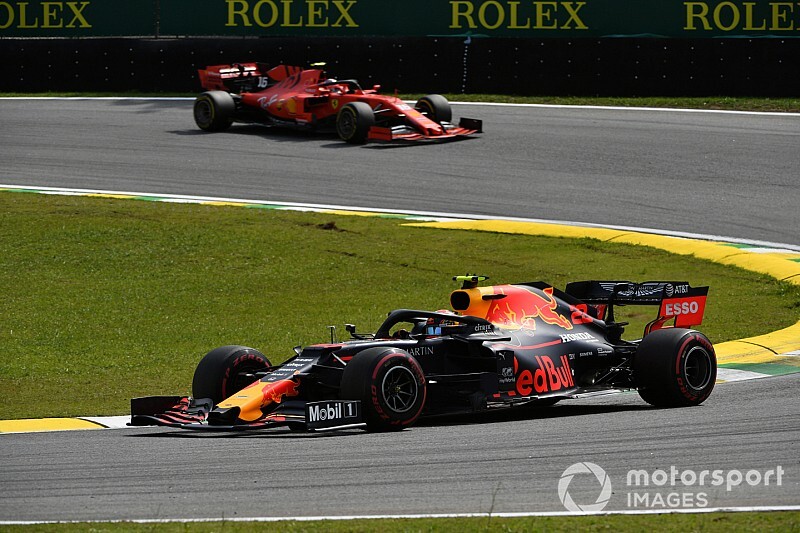 After six consecutive pole positions since the summer break, Ferrari has now gone two races without pole, and was notably slower on the straights in qualifying and the race in Brazil compared to practice.

While that can easily be explained by different engine modes, Ferrari barely registered a straightline speed advantage at Interlagos, where both the Italian team and Mercedes were surprised to see Red Bull almost as quick in a straight line.

Amid speculation this was further proof that consecutive FIA technical directives clamping down further on potential oil burn and fuel flow exploitation, Ferrari team principal Mattia Binotto said after the race that its top-speed edge was reduced because of its car set-up.

"Certainly they [Red Bull and Honda] were fast," said Binotto. "They were fast that around the lap, they were fast on the straight as well.

"We need to analyse it but if I look our qualy compared to them, I think we're almost matching them in grip limited [conditions].

"And it was very close as well on the straightline, in terms of being power limited. So I think it's a balance between aero configuration, what you're choosing.

"It is the very first time maybe where we are so close to them in grip limited, showing that as Ferrari we are moving in a different set-up direction, giving advantage in the cornering."

Both Ferrari drivers failing to finish after Sebastian Vettel and Charles Leclerc collided in the latter stages of the race, which had been more competitive than the previous raced in the United States.

Binotto indicated that there was a tyre-related set-up issue that held Ferrari back in the US, where it had been alleged that Ferrari had lost performance purely because of the FIA's clampdown.

"[Brazil] was similar to a Mexico situation, and the previous races," said Binotto. "We are still lacking a bit of pace in the race – not much, but certainly what's required to make sure that we stay ahead.

"Sebastian was a comfortable third, he was faster than at least a Mercedes and another Red Bull. Charles from 14th would have been on the podium eventually, so I think the race certainly was OK.

"Austin was certainly a bad race for us. Not in the continuity with all the others.

"What happened there is not too clear yet to us. But certainly the car balance was not right, the drivers got in the race difficulty in putting energy into the tyres to warm them up.

"So it's set-up, tyres-related. We took some action from there, but that's something we keep within the team as a specific car situation."