Ferrari "quite surprised" by Suzuka qualifying 1-2 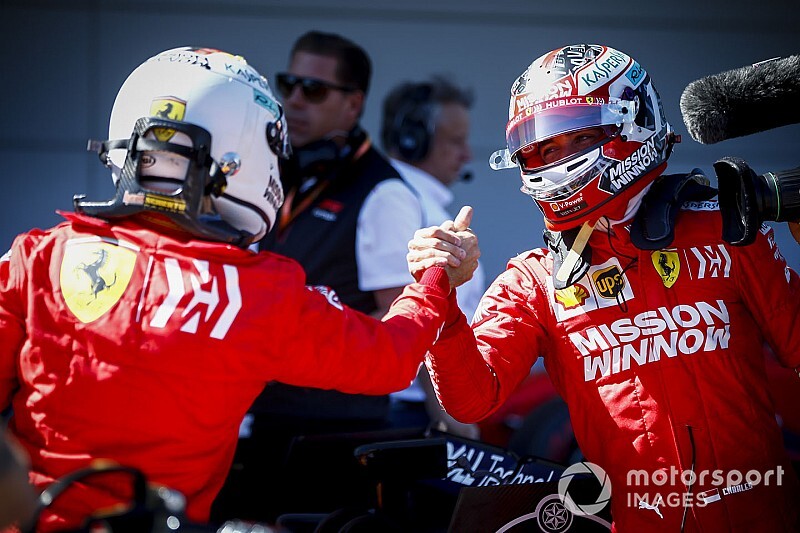 Ferrari duo Sebastian Vettel and Charles Leclerc have admitted their front-row lock out at the Japanese Grand Prix was unexpected.

With rivals Mercedes having looked so fast on Friday, few had expected Ferrari to have a chance of maintaining a run of pole positions that stretches back to the Belgian Grand Prix.

But the Maranello cars were dominant throughout the delayed Sunday morning Q3 session, with Vettel ending up on pole from his teammate by just under two tenths of a second.

Vettel said: “I think we are quite surprised, to be honest. We didn’t expect to have the front row so I am very happy.

“It was unbelievable, the car being so light on fuel and new tyres. We had a headwind up the Esses, which is just what you want because then the car feels even better.

"I don’t think I used the brakes other than Turn 2. It was unbelievable. I really enjoyed it but it is only part of the job done so let’s look forward to this afternoon.”

Leclerc admitted that he had not been as happy with his car this weekend, even though he still had enough to edge out Mercedes.

“Seb did an amazing lap and today he just deserved to be on pole” said the Monegasque driver. “I’ve been a bit struggling since the beginning of the weekend but to be honest I was pretty happy with my lap now in qualifying, apart from the last sector where I did some few mistakes but pole position was not possible.

“Seb was just too quick, so congratulations to him. Very happy and very surprised to be first and second after the free practices we have had.”

“We seemed quite strong ahead of qualifying but always knew Ferrari maybe might have something in reserve to turn things up, especially in Q3,” explained the Mercedes driver. “They were untouchable really.

“It is the same thing: on the straight lines they are quicker, through the corners we are good. We had the new package here with the new aero bits and that was a lot better than before but still not quite enough.”

Williams in race against time to replace Kubica's chassis