Ferrari Formula 1 team principal Maurizio Arrivabene has angrily ruled out the possibility of forcing his drivers to obey team orders at the start of grands prix.

“I want to be clear - once, forever,” he said, speaking to the press for the first time on the subject. “Who is so crazy to give a team order to a driver at the start of the race?”

His comments followed a bizarre turn of events at the Italian Grand Prix in which Kimi Raikkonen, who was 68 points behind teammate Sebastian Vettel at the time - 214 points to 146 - was seemingly given preference over Sebastian Vettel in qualifying. Raikkonen duly set Formula 1’s fastest ever lap to claim pole position.

From there, after Ferrari declared that its drivers were “free to race” each other in the grand prix, Raikkonen rebuffed a challenge from Vettel at the start – leaving his teammate vulnerable to attack from Lewis Hamilton later in the lap.

Vettel then spun as he tried to maintain position when Hamilton overtook him around the outside at the Roggia chicane. The incident consigned him to a damage-limitation strategy and an eventual fourth-place finish, causing him to lose 13 points to Hamilton in the drivers’ championship.

Arrivabene hit out at critics of Ferrari’s race operations, contending that there is too much happening in too short a timeframe at the beginning of a grand prix, with too many variables, for a team to effectively impose orders.

“We do everything with the maximum professional effort,” he said. “Before the race we look at the video of the start [of previous races at that circuit]. Our team manager gives instructions to the drivers about the best line to follow.

“The only instruction you can give to the drivers for the first corner is, ‘Guys, I would like to have both of the cars OK.’”

“All the rest is nonsense and I’ll explain the reason to you. Kimi, in the case of Monza, was in pole position – do we agree for once on this? Sebastian was eight metres from him. How do you think Kimi can look where Sebastian is?

“So in your opinion the order is, ‘Kimi, please, slow down when you start and don’t worry if Hamilton and all the others are overtaking you.’ What are we discussing?

“The problem in Monza is that there is no time to give team orders to anyone, because at the first corner what happened, happened. This is the reality.

“Don’t expect me to give team orders to the drivers at the start of the race, looking forward to the first corner. It’s too dangerous and it’s crazy.”

Arrivabene’s resolve is likely to be tested in Singapore this weekend. It was at the start of this race last season that Vettel made an indifferent start from pole position and jinked right on the approach to Turn 1, collecting both Raikkonen and the Red Bull of Max Verstappen.

The incident forced all three cars to retire from the race and was the first of a series of events that derailed Vettel’s championship challenge. 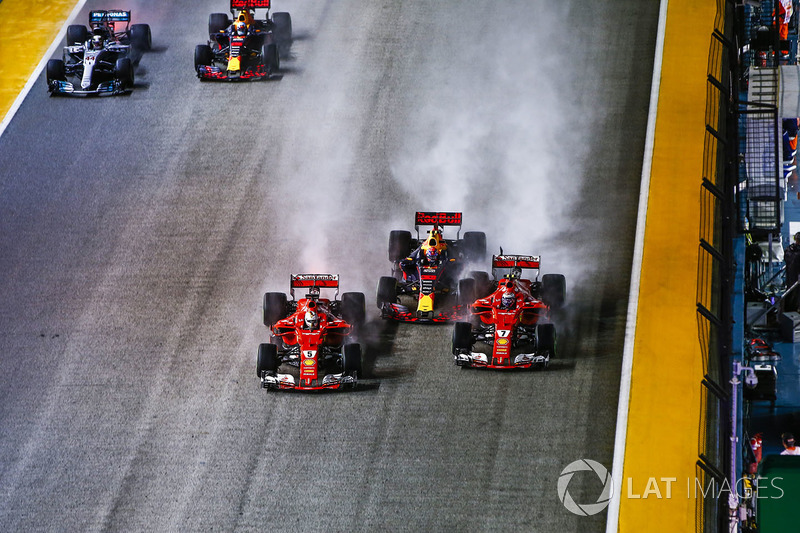 Singapore GP: Hamilton storms to pole ahead of Verstappen