Ferrari: Turning the page without forgetting the lesson

The team’s third place nonetheless represents a sign of continuity at the top that has no equal.

Maranello – In Formula 1 you never stop. The 2013 season only finished 24 hours ago but heads have already turned towards the next one: indeed in little more than two months we will return to the track at Jerez de la Frontera for the first of three pre-season tests.

So there’s not a moment to lose because at Ferrari we know that every bit of energy must be focused on the new car and preparation for the next championship. It’s true that the fundamental choices have already been computed and that there is a huge amount of work to do to be ready at the start. Never before have so many rule changes led to such a technical reset and, consequently, the chance to start again from more or less the same level. 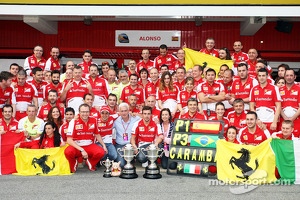 Now the programme of updates to the wind tunnel has been completed it has returned to working full-time and the technical department has been boosted by the arrival of James Allison and other engineers, all the elements are in place to compete at the highest level in the knowledge that only one result can be enough: victory. The team owes it to itself, to its drivers and to its outstanding tifosi who, even in a difficult season, have always been very close, proving themselves yet again to be the best in the world.

The moment has also arrived to take stock of a championship, the one that finished yesterday, which has brought more disappointment than joy. Among the former the biggest was not managing to adapt the F138 to the changes to the tyres that were introduced during the course of the year. We should say that the first target requested of his team by Domenicali a year ago – to start straightaway with a car that was capable of winning – was achieved: two wins and a podium in the first five races and two more podiums that slipped through our fingers through particular incidents bear witness to that.

Summer didn’t lead to the change of gear in development that would have been necessary to battle with the strength of the Vettel-Red Bull partnership, which absolutely dominated the second part of the season: given why this jump in quality didn’t happen, the engineers will have to work hard in order to avoid a repeat of certain errors that have been very costly this year.{{ Looking at the balance sheet there are still two victories (China and Spain) and two Champions League places, to borrow a term from football: Fernando Alonso’s second place in the drivers’ championship and the team’s third place in the constructors’ championship. Fernando has again been exceptional: the fact that he has finished in this position three times in his last four seasons with the Scuderia is down above all to his talent as well as the skill of a team that has worked hard and well at the track. 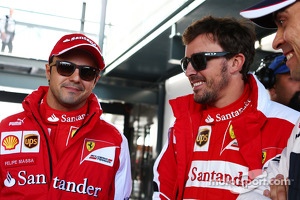 We don’t believe we are being presumptuous if we claim that our overall reliability, race strategy and pit stop work have been the best of anyone during 2013, a sign that, even when things aren’t going in the right direction, it’s always best to make sure you don’t throw out the baby with the bathwater.

The team’s third place nonetheless represents a sign of continuity at the top that has no equal. No one, not just in Formula 1 but also in the other most important sporting disciplines, can say that they have stayed in the world championship top three from 1994 to today – with the sole exception of 2009 when the Scuderia was fourth by one point. There remains a bit of bitterness for the penalty, which was excessive to say the least, inflicted yesterday on Felipe Massa, which deprived him of a top four finish.

Without the drive-through the Brazilian would have finished in fourth place and the team would have collected 27 points, 17 more than Mercedes (who would have ended up with ten points: eight from Rosberg’s sixth place and two from Hamilton’s ninth place) and would thus have been two points clear of the Anglo-German team in the final standings: a slap in the face, this penalty, which we could have definitely done without.

Interlagos signalled not just the end of the 2013 season but also the end of a relationship between the Scuderia and Felipe which began a full 12 years ago. It was a weekend that was emotionally very intense for everyone at the track but also for those at Maranello who have worked alongside the Brazilian driver for many years. “He said goodbye with a very good performance and it’s really a shame that he couldn’t have done the same from the very podium where, five years ago, he gave a lesson in dignity and sportsmanship to the whole world,” said Stefano Domenicali, one of those who has always stood by Felipe through the highs and lows. 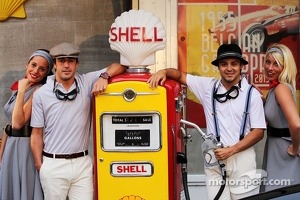 Fernando Alonso, Ferrari and Felipe Massa, Ferrari at the Back In Time with Shell event

“Many emotions have come in quick succession through these last few days, one after another. On the slowing down lap I told Felipe over the radio that he would always stay in our hearts and, above all, that he is a world champion to us.” Now Felipe is ready for a new adventure but there will still be a time and a chance to say goodbye to him here at Maranello at the company’s Pre-Christmas events. From January 1 he will be wearing the colours of another team but he will always stay a friend of Ferrari: obrigado Felipe!

Tears and anger as 2013 season closes in Brazil

Only Vettel 'sad' 2013 season finally over