Ferrari's tyre woes "nothing to do" with upgrade - Binotto 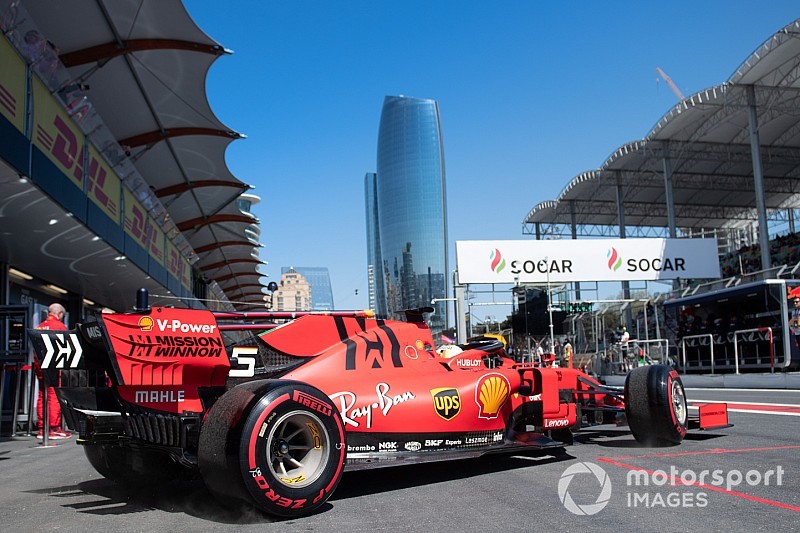 Ferrari's struggles with Pirelli's Formula 1 tyres in the Azerbaijan Grand Prix had “nothing to do” with its Baku upgrades, according to team boss Mattia Binotto.

The Italian outfit introduced its first update of the F1 season in Azerbaijan, fielding a revised bargeboard package and lower-drag wing at the street circuit.

Ferrari looked to have the edge over its main rival Mercedes for much of the Baku weekend but was bested again in the race, with Sebastian Vettel's poor first stint on softs allowing Valtteri Bottas and Lewis Hamilton to claim another 1-2 for Mercedes.

Vettel described tyres as the “dominating factor” hampering the SF90's performance after the race, and when asked by Motorsport.com how the Baku upgrade factored into this, Binotto played down any impact.

“I think it's nothing to do with the upgrades or the overall, let me say, performance of the car,” Binotto said. “Certainly managing the tyres is not easy, this circuit is a very difficult circuit related to tyres, due to the very little level of energy you're putting into the tyres.

“Bringing temperature into tyres is difficult, the window somehow maybe very little - I think generally speaking it's not easy to manage them, but not related to the upgrade or nothing to do [with it].

Asked to assess the performance of the updates, Binotto said: “The updates work as expected. These are only the very first one, a few updates are expected as well in the next races, so we'll not stop here and our hope certainly is that we can do a better job in the future.”

More from the Azerbaijan GP:

Vettel's teammate Charles Leclerc swept the three practice sessions in Baku but crashed out in the second qualifying segment, while Vettel himself was then unable to prevent a Mercedes front-row lockout, thwarted by a lack of tow and falling track temperatures.

For Binotto, his drivers having to start further back on the grid than the main opposition is what proved key to the outcome of the race.

“I think we got a good car for qualy, potentially we could have been on pole, we didn't, and I think the race is certainly a different matter," he added.

“I think that being in front or staying behind, it's quite different to manage your pace, your tyres, and when you've got fresh or clean air it's really a lot easier. I think our pace today has been as well affected by our position on the grid, at the start.

“Not only [that], certainly the others are very strong, and we are facing a very strong competition.”

Five things we learned from the Azerbaijan Grand Prix