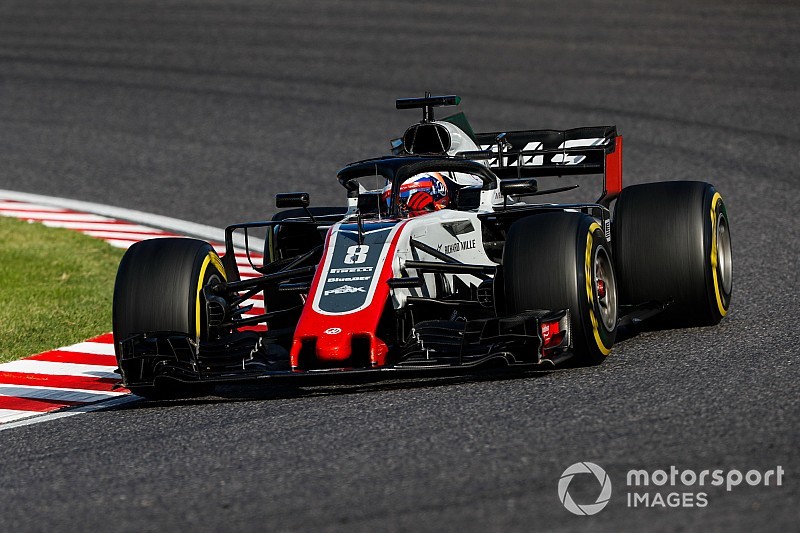 Grosjean still managed to finish eighth at Suzuka, despite also suffering a handling problem that team principal Gunther Steiner said was related to part of the rear suspension "moving".

Steiner explained that Haas could not help Grosjean identify the problem when it struck because of the lack of data from the car.

"We don't know why it broke because in the beginning we had no telemetry," he explained.

"No tyre temperatures, nothing, because we had a fire because I think some oil came out and burnt all the wiring down.

"So we had no data on temperature, tyre pressure, a lot of others just missing.

"So when he said 'on the straights the car is pulling, I don't know which side', we thought he had maybe picked up a puncture from the debris from [Kevin] Magnussen but he didn't so we continued.

"The whole race was not easy. It looked a lot easier than it actually was.

"We never knew how warm the tyres were and we all know how important that is to know. So we were struggling."

Grosjean lost seventh place to Sergio Perez following the late virtual safety car period, and complained on the radio that he could not understand how the Force India had gained on him during or immediately after the VSC.

But Steiner does not believe anything untoward happened.

"There was nothing wrong with what Perez did, he was just on the case and sometimes in virtual safety cars you can be in a better or worse position by the regulations because you have these mini sectors," he said.

"He was good there, his tyres were too, he just had better traction there and out of the chicane just overtook him."

The second Haas of Kevin Magnussen retired due to damage from his early clash with Charles Leclerc's Sauber.

But Grosjean's eighth place meant Haas still got the gap to Renault in the battle for fourth in the constructors' championship back down to eight points.

"We are pretty happy to get away with points from here after seeing the issues we had," Steiner added.

"If your car is on fire on lap one, that normally is not good."