Five things we learned from the Monaco GP and Indy 500

Motorsport.com’s Global Editor-in-Chief Charles Bradley gives his views on motorsport’s mega weekend of the Monaco Grand Prix and the Indy 500.

1: Ferrari is making all the right moves 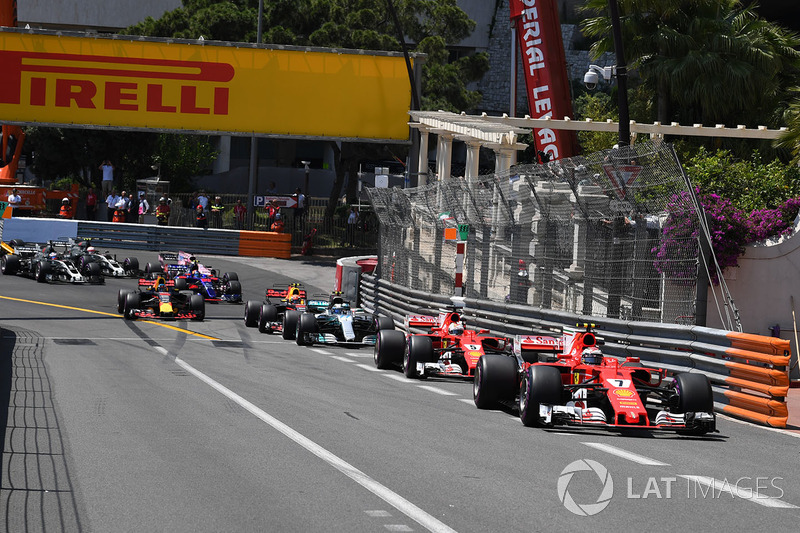 I spotted a sweet little moment in the Monaco paddock on Saturday afternoon, as a couple of Ferrari’s technical boffins were greeted by the hospitality staff following its 1-2 qualifying lockout. Being all Italian, there was no need for words, but the exchange of hand gestures spoke for themselves: “We are getting this so right!”

This was another perfectly-executed race weekend from the Prancing Horse. And while Kimi Raikkonen might have been gutted about missing out on victory – which was expected of him after securing his first pole since 2008 – he can’t really complain that Sebastian Vettel jumped him.

Remember how Mercedes played it in the era of Lewis Hamilton/Nico Rosberg dominance? They’d give the frontrunning car the call on pit strategy, and Kimi was the one on new tyres when Vettel was running longer on the boots he started with.

Yet Seb still won this on pure pace, outpacing Raikkonen through the following laps to 'overcut' him, although Kimi might question why the pitwall sent him out into backmarker traffic.

Vettel now has a 25-point lead in the championship – a whole race win’s worth of points advantage over Hamilton as we approach the one-third point of the season. Ferrari has moved ahead of Mercedes in the constructors’ points too. Who predicted that?

Canada will be a totally different proposition, of course, but Mercedes will have to make its “fast but difficult” car a little less of a “diva” if it's to challenge a Scuderia that's finally firing on all cylinders. 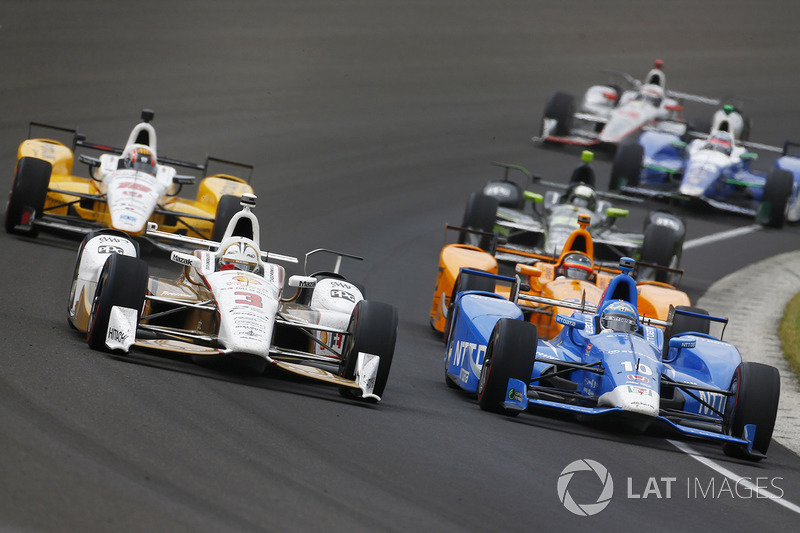 You can’t beat the Monaco Grand Prix for glitz, style and glamour. But you can trump its racing product, as the Indianapolis 500 proved on Sunday.

The real thrill of ‘racing’ around the streets of Monte Carlo is actually Saturday’s qualifying session, which again served up a thriller, with the top three covered by just 0.06s in the final reckoning.

As Nelson Piquet so adroitly observed, racing at Monaco is like “riding a bicycle around your living room” – whereas the vast expanse of Indy promotes close and thrilling action on raceday.

While Monaco on Sunday was a total snorefest, with pit strategy largely defining the finishing order, Indy was anything but. Fernando Alonso’s presence was of course the main draw, but even he was overshadowed somewhat by some frantic racing and huge crashes.

Now F1 will roll on to Canada, where we’d expect rather more potential for an exciting Sunday afternoon given past performance, as IndyCar’s next step is Detroit. The racing on Belle Isle will still be super-competitive, but the crowd and TV audience will be a fraction of what it was this weekend.

Although depressing for all concerned, the buzz created by the Alonso factor shows that it still has something to offer the world stage.

Think back to the mid-90s, and the Mansell/Villeneuve/Zanardi/Montoya years, before the effect of its wretched ‘split’ really took hold; back then, I always viewed it as America’s answer to Formula 1. But, in its current form, it feels more like F2 (nee GP2) than anything.

It’s going to take some time, but if IndyCar can repeat some of Sunday’s success with a stable calendar, and perhaps look outside its domestic shores once more, the good times could roll again for much more than one weekend per year again.

It truly felt like a race of two worlds last weekend, especially when Alonso – who was preparing for his Indy 500 debut in America – radioed Jenson Button, who was about to make his F1 comeback in Monte Carlo, asking him to take care of his car.

Jenson joked he’d “pee in his seat” – and there might even have been a slight leakage when he flicked Pascal Wehrlein on to his side and into the barriers.

As Button toiled and then exited his race, always hamstrung by a huge grid penalty after an impressive qualifying performance, it was Alonso who earned all the plaudits at Indy.

The two-time F1 champion took to Indy’s oval like a duck to water, and looked right in the hunt for victory until the seemingly inevitable Honda engine failure. Oh the irony.

Cue PR disaster for Honda, which was only slightly offset by Takuma Sato using its impressive horsepower advantage to deny Helio Castroneves in the final laps.

Great stuff for Sato – recall the superb way he reacted to his last-lap wreck in 2012 after attempting to brave it out with Dario Franchitti? He earned this one the hard way.

But for Alonso and Button, it was the kind of disappointing end they’ve become used to.

4: Verstappen isn’t afraid to toast his team over strategy

After a couple of high-profile shunts at his first two attempts, at least Max Verstappen finished the Monaco Grand Prix this time, but that just wasn’t good enough for F1’s precocious one.

Red Bull opted for a relatively early pitstop, and just as Raikkonen would find out later, staying out on the counter-intuitively long-lasting ultrasofts was the way to go.

And as the pitstop cycle played out, Max found himself shuffled back behind teammate Daniel Ricciardo, prompting that “[bleep]ing disaster” radio message.

Otherwise, he'd got the clean weekend he was looking for, but was clearly biting his lip when he said “we were unlucky” on strategy.

Team chief Christian Horner said: “The strategy could go either way, we spoke about it in the morning. We’ve got one happy driver and one less-happy driver!”

But having carried a six-tenths qualifying advantage over his teammate, only to be beaten by him in the race, must be totally galling. And he’s last in the big three teams’ driver points.

It’ll be interesting to see what reaction comes next…

5: Dixon is a lucky, lucky boy 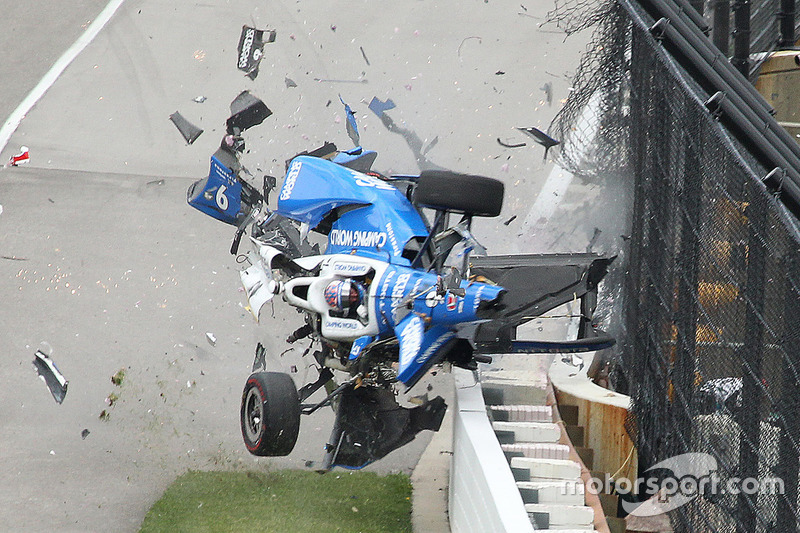 No surprise that Scott Dixon’s spectacular exit from the Indy 500 made the mainstream sports headlines on Monday morning, as his high-flying, fiery shunt grabbed the attention of the rubber-necked masses.

Credit to modern-day safety standards that he could hobble away from this giant wreck, although the mind does wander darkly in terms of what the outcome might have been if he’d been launched just a few degrees more sharply to the left or right.

And how about Helio Castroneves’ escape, driving underneath the airborne Ganassi star?

“Just a little beaten up, it was definitely a rough ride,” chirped Dixon after his medical checks. “It’s just a wild ride man, you just hold on. Big thanks to Dallara for the safety standards.”

Just a week on from being robbed at gunpoint after taking the pole, you'd think he'd deserve a break, eh...

Story behind the photo: How homework caught Vettel victory

Analysis: Why Mercedes' tyre struggles might continue past Monaco