Five things to watch for in the 2018 F1 car launches 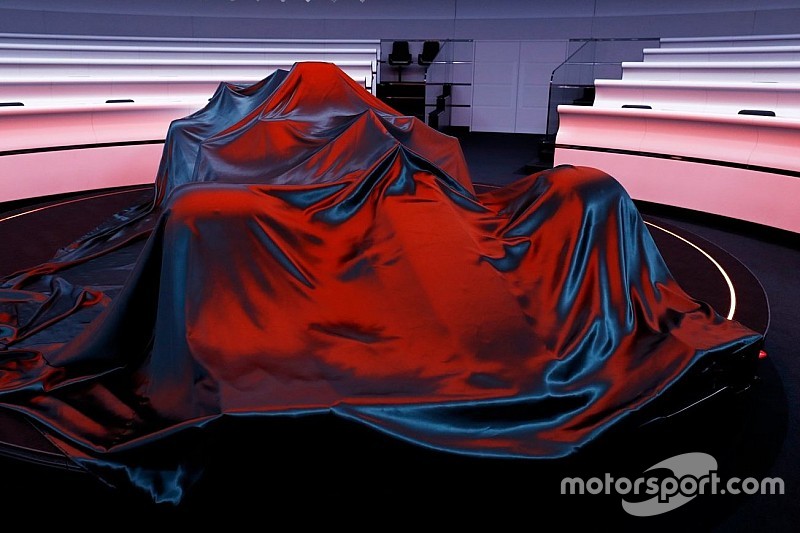 With Formula 1's launch season right around the corner, Matthew Somerfield analyses the top five things to look out for.

Will Ferrari and Mercedes designs converge?

There was a huge emphasis placed on the differing wheelbases of title rivals Ferrari and Mercedes last year, with Mercedes' choice to run a much longer car than the rest of the field singled out as both a strength (better aero) and weakness (extra weight).

While Mercedes' ultimate success proved that the advantages overcame the downsides, the team knew it was on the limit in terms of how heavy it was, and this area is likely to have been a key focus over the winter.

Mercedes has repeatedly said, however, that it would not be shortening its car, but the proof of that will only come out when the W09 is revealed.

We may, however, see Ferrari go a bit longer with its successor to the SF70H, as it knows there were downsides to its nimble chassis on long flowing circuits.

It will be interesting to see during the launch period what teams have decided to settle on, especially as Pirelli's choice to move to a tyre range with more degradation will also have an impact on any thinking about the best way to approach 2018.

How much will teams have copied each other?

Convergence is an inevitable factor in the life-cycle of F1 regulations, as each team keeps a keen eye on its competitors. This often leads to the assimilation of ideas that are not fully embedded in the DNA of a car.

Any good ideas from the opposition that need a concept rethink, or prove difficult to copy mid season, often get incorporated over the winter, so it will be fascinating to see which are the best ideas that become accepted practice in 2018. 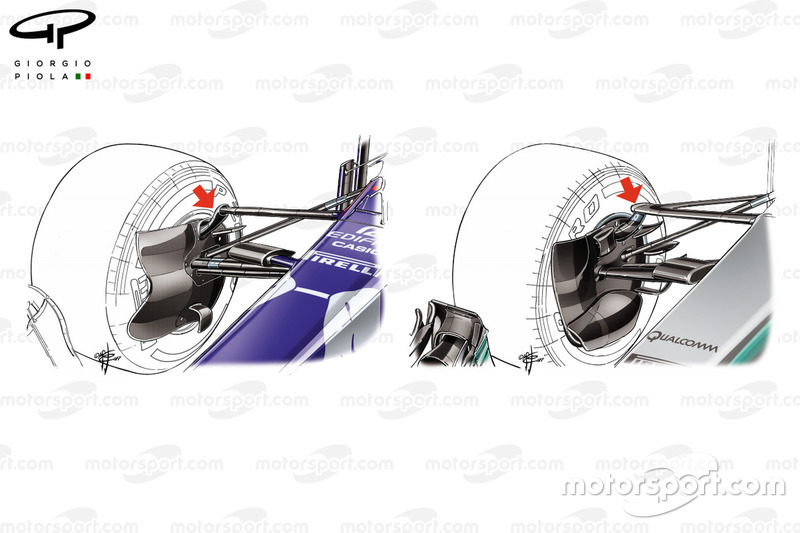 Mercedes and Toro Rosso's raised front suspension upright was one such example of this type of 'baked in' design decision that might influence others or just as easily be dropped by both.

It's a design that perhaps has more influence aerodynamically than it does from a suspension point of view, improving the airflow's path toward and around the cars midriff.

But with the aforementioned change in degradation philosophy from Pirelli, it may come as a handy solution for those looking for some adaptability. 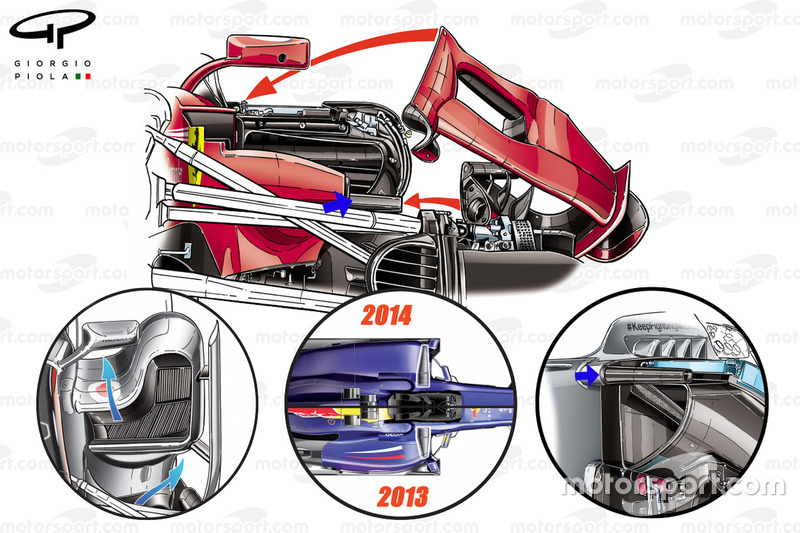 Ferrari's sidepods were a standout solution in 2017, with their design only possible due to the movement of the side impact support spars from their almost universally recognized position (lower right inset), with specification parts being employed since 2014.

This ingenious solution made it almost impossible to copy in-season but it is undoubtedly on everyone else's radar going into 2018, given the perceived gains that can be made with the more complex aerodynamic arrangement around the sidepod.

Will T-wings make half a comeback? 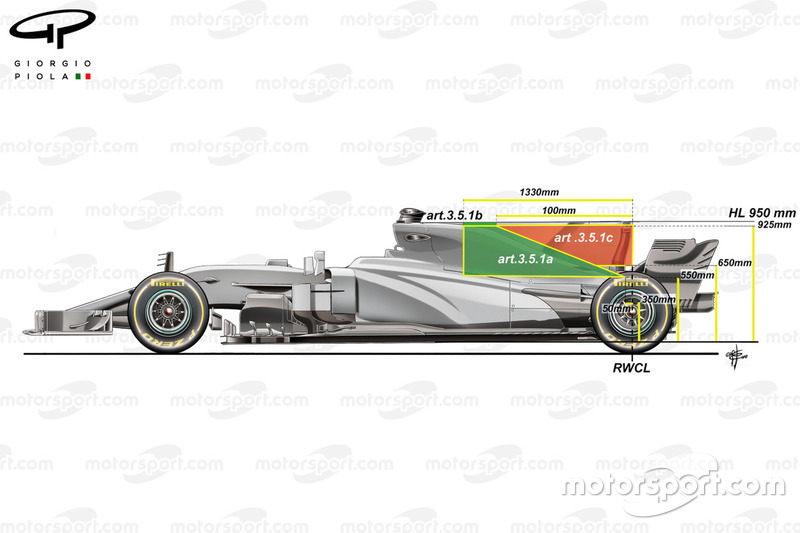 The FIA and teams agreed to remove the ugly T-wings for 2018 through creating a larger exclusion zone ahead of the rear wing. This was all part of a package that did away with the shark fin engine covers too. 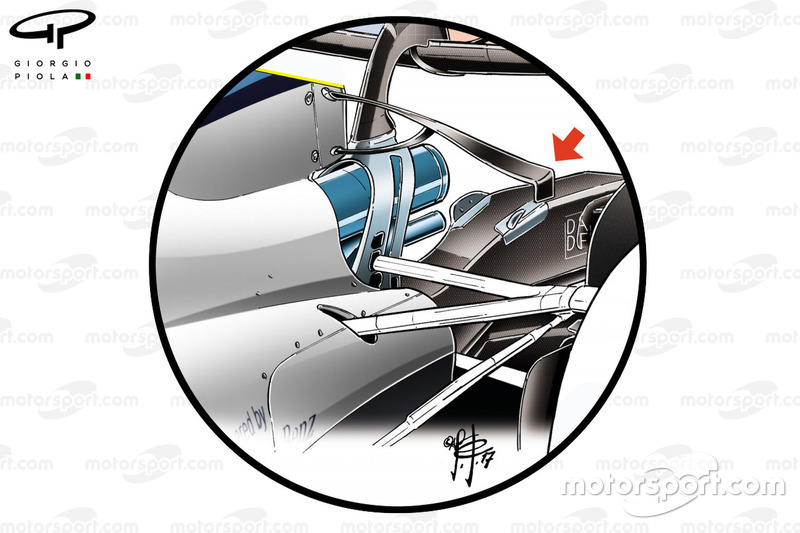 However, as always seems to be the case, F1 knowledge cannot be unlearned. So teams, well aware of the benefits of the T-wings, will be looking to exploit a small loophole in the rules that does permit the installation of the lower versions that we saw Williams and Sauber run last year.

Whether or not this design idea becomes a path that teams follow will be interesting to see, and we may not even see them appear at the launches.

Just remember last year that Mercedes unveiled its car without a T-wing, only for it to appear at the shakedown later in the day.

How radical will Paddy Lowe's new Williams be?

Williams will not be happy with its performance in 2017, but it always knew that it would take time for technical chief Paddy Lowe's influence to start being felt.

His focus was very much on ensuring that the FW41 was a step change, and he has been open about the team taking a new approach with its car for the season ahead. Former driver Felipe Massa was clear that the wind tunnel model looked very different from its predecessor.

The team went through a period of internal flux leading up to 2017 and with such a large regulation change it was no huge surprise that it did not make the gains it may have liked.

But having had time to stabilize and restructure, it will be hoping that it can make strides in a season where the 'fight for fourth' will only intensify, due to the perceived improvement of Renault as a works entity and McLaren's change of power unit supplier.

Will we get used to the Halo?

Divisive is perhaps the best word to describe the impact that the Halo has had since it first starting appearing on Formula 1 cars.

While its presence will continue to split opinions and become a talking point when the new cars are unveiled, what will be interesting to see is how each team has made use of the 20mm of bodywork freedom they is allowed around it.

It's a design freedom that's not even worth hiding, as McLaren unveiled a triple element aerodynamic hoop atop its halo in the post Abu Dhabi test last year.

However, each team will have its own way of going about this, whether it will be simply a streamlining exercise or an aero driven concept such as McLaren's.

How F1's curse-beater is proving its doubters wrong