The floor tweaks aimed to slow down F1 cars in 2021 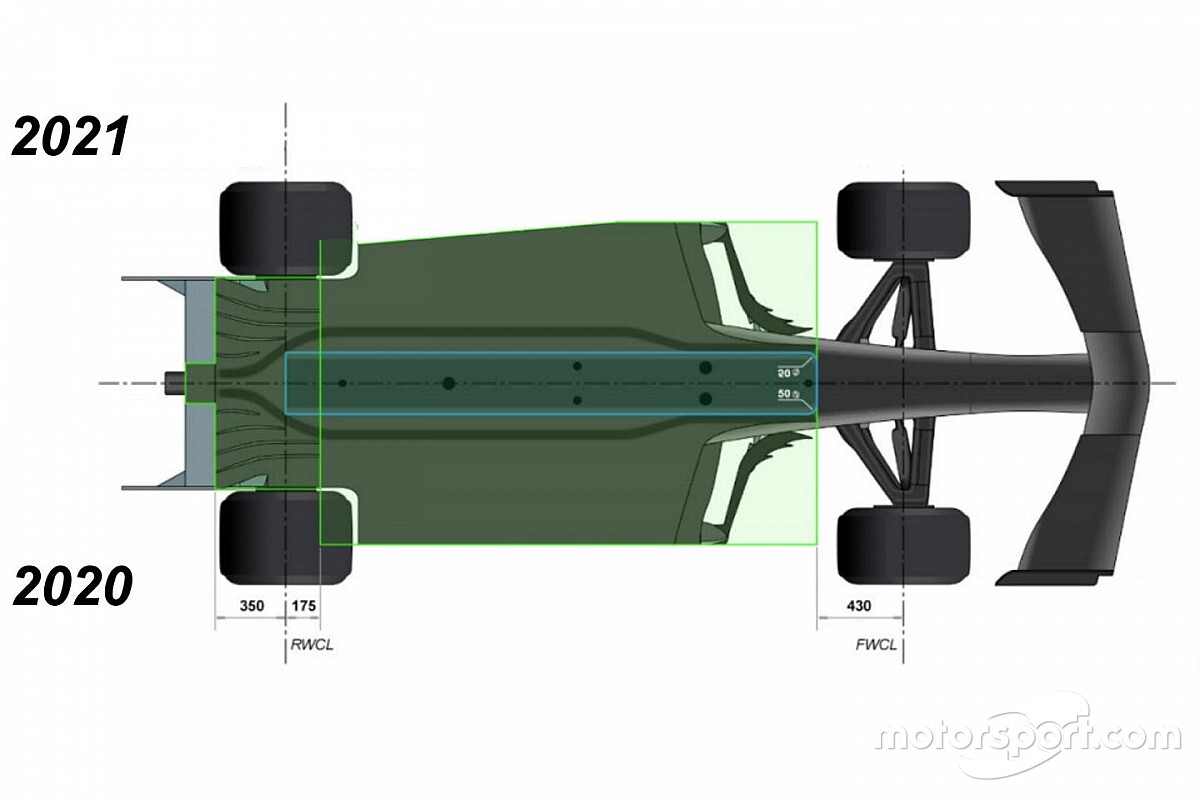 With Formula 1 keeping the current generation of cars through 2021 as a result of the coronavirus pandemic impact, there had been concerns that car development could start to cause some headaches.

In particular, the chief worry was that ever-increasing amounts of downforce could push tyres over the limit they were originally designed for – with the rubber spec set to have its third year of running next season.

So in a bid to ensure F1 is not left in a situation where Pirelli’s only option to manage the tyres is to force teams to use ever higher pressures – something they don’t like – it has been agreed to make some changes to the floor area of the car to bring downforce levels down.

The change in wording to article 3.7.2  of F1’s technical regulations means that the edge of the floor will no longer be equidistant from the car’s centre line all the way from the front to the back. This creates a sort of boat tail effect instead.

Furthermore, alterations to the dimensions mentioned in article 3.7.10 mean the designers will no longer have the freedom to incorporate fully enclosed holes on the floor’s edge, or ahead of the rear tyre, as they have since 2017.

In the case of the holes created on the edge of the floor, their rampant use has yielded a significant increase in downforce, as they have helped the aerodynamicists ‘seal’ the flow of airflow under the car from the turbulence created by the front tyres.

Meanwhile, the holes used ahead of the rear tyre have helped to mitigate the effects of ‘tyre squirt’ - a phenomenon caused by the deformation of the rear tyre that reduces diffuser performance as jets of air are pushed laterally into its path.

What will likely happen as a reaction is that designers will revert to using slot designs, as long as they work in conjunction with the new floor shape.

This practice, whereby a small slit is used to perforate the edge of the floor and turn what is ostensibly a hole into a slot, only really fell out of favour because they were slightly less effective than a hole.

In order to stop the teams from making gains from aero elasticity, the goalposts have also been moved when it comes to flex tests performed on this area of the car too.

Article 3.9.2 allows 2mm less vertical deflection, whilst the point at which it is measured from the centre plane has also been shifted 50mm.

In the grand scheme of things, the changes are unlikely to have a massive performance impact, as continuous development of a known concept would have likely have resulted in a gain that will now have to be recovered.

However, it’s unlikely that the new more restrictive tolerances will allow them to make rapid gains in the short term.

Here’s a gallery of some of the solutions used by teams in recent years in respect of both the holes parallel to the edge of the floor and the ones just ahead of the rear tyre.

Ferrari SF70H cut in the floor 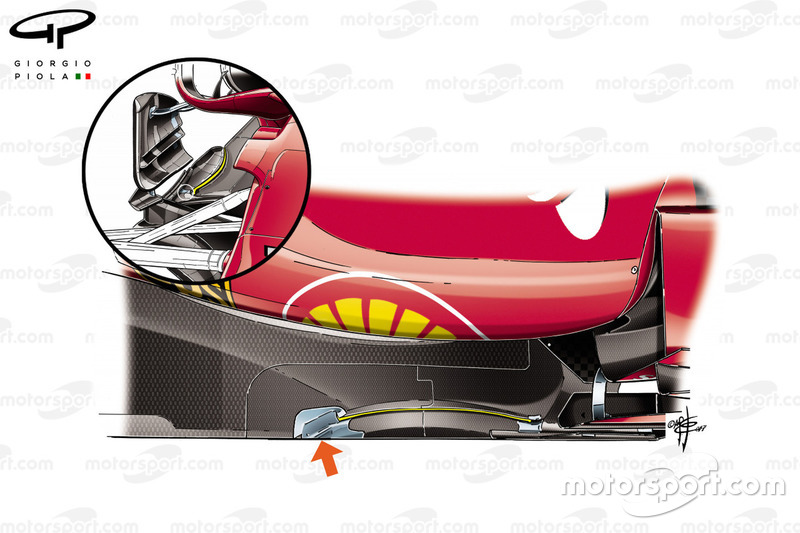 Debate raged at the time about the scythe-shaped floor cut out on the SF70H and how it would flap around under load to the point where the FIA requested that Ferrari more rigidly fix it to the floor. The intrigue surrounding this was partly what led to the everyone’s understanding that they could place fully enclosed holes in the outer 100mm of the floor. 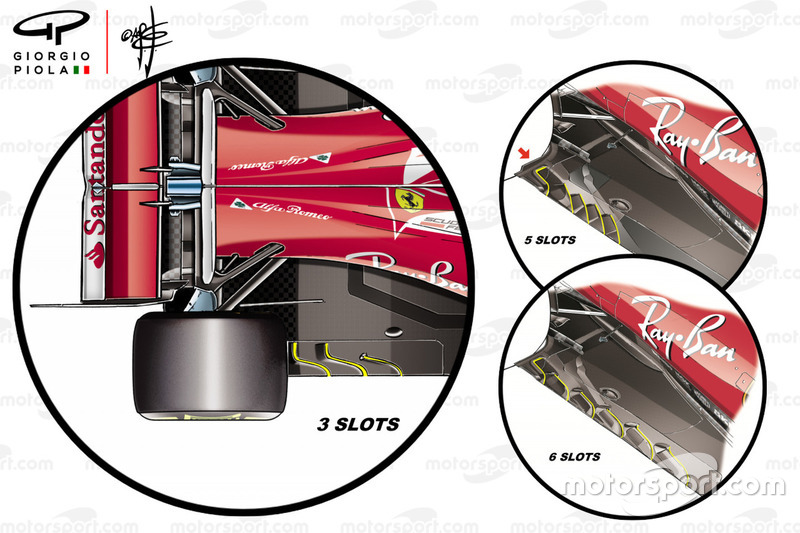 An array of slot solutions that were used by Ferrari to combat tyre squirt prior to the teams using the fully enclosed holes that were permitted within the 2017 regulations. 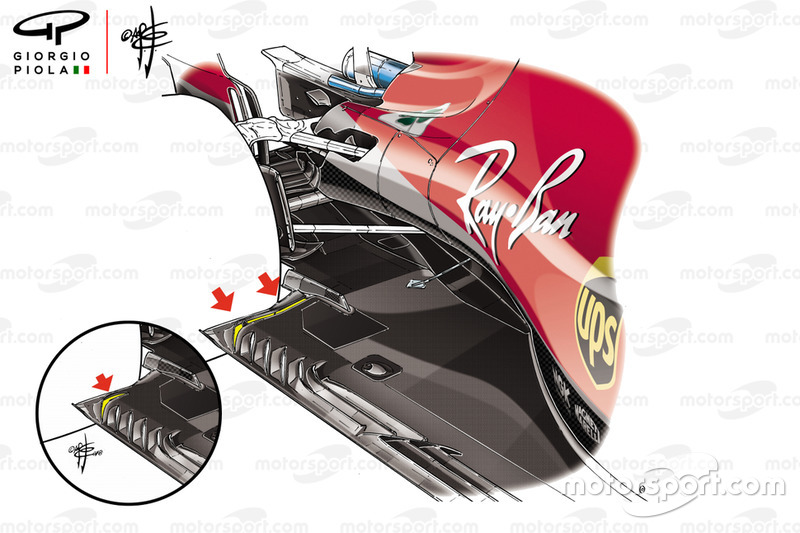 The different fully enclosed hole arrangements used by Ferrari ahead of the rear tyre during 2018. 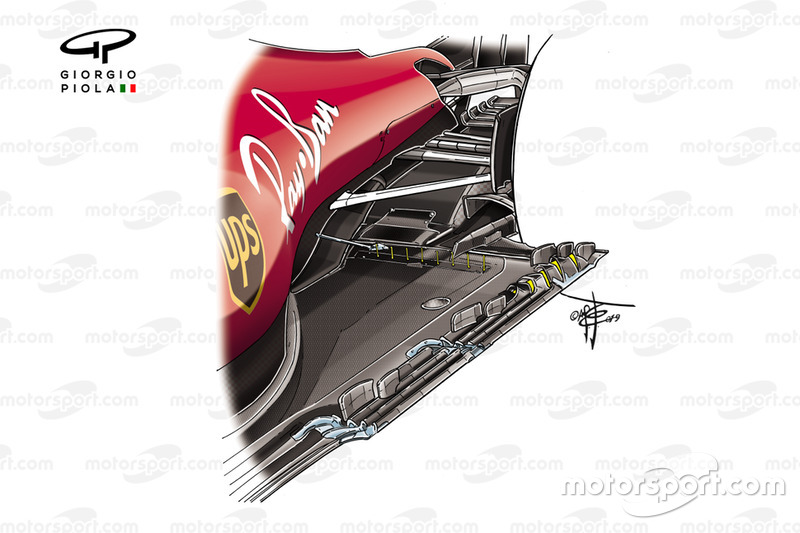 The complexity of the solutions used has only intensified since the teams started taking advantage of this regulatory oversight, with the Ferrari SF90 using a plethora of longitudinal holes parallel to the floor’s edge and diagonal ones ahead of the rear tyre. These combine to increase the downforce that’s able to be made by the floor. 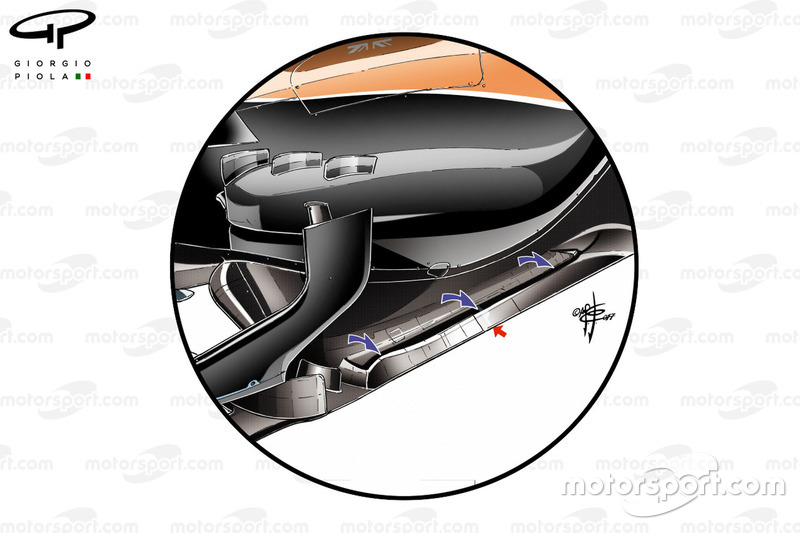 McLaren was an early adopter of the longer fully enclosed holes toward the front of the floor that ran parallel with its edge. 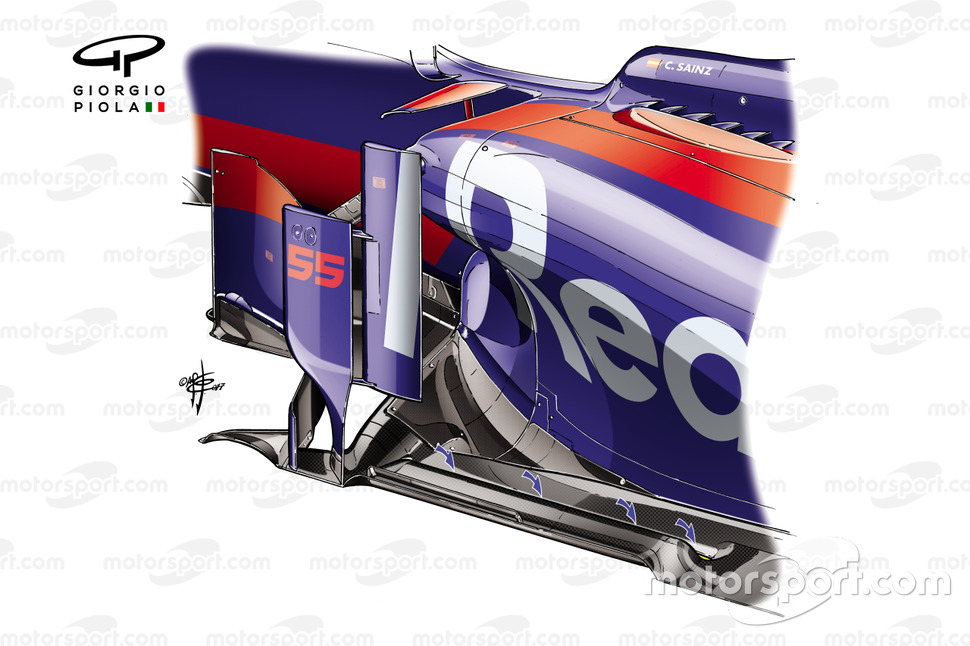 A fully enclosed hole toward the front of the floor on Toro Rosso’s 2017 challenger, the STR12 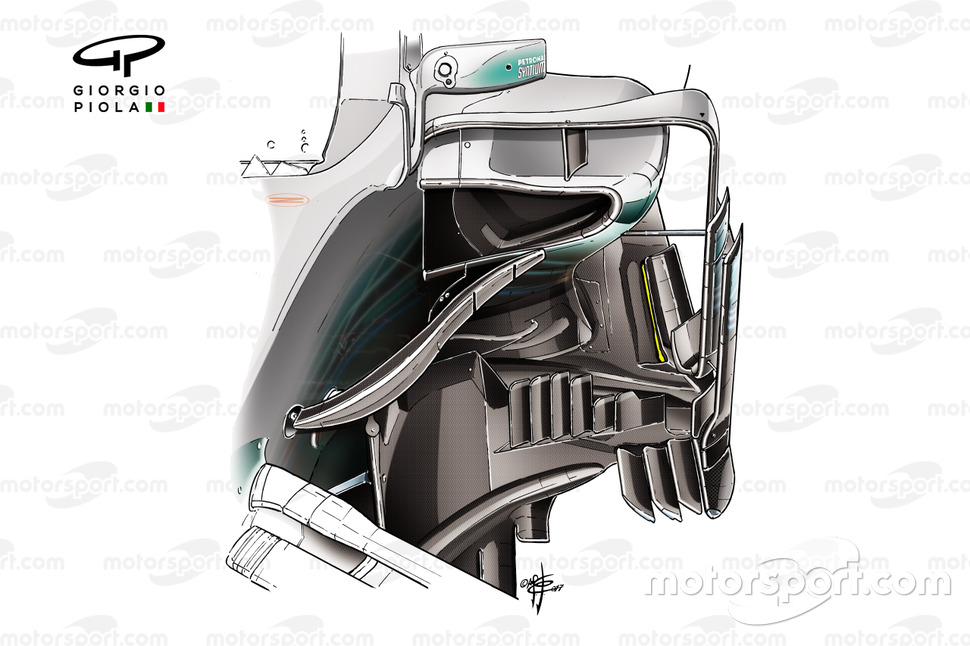 Similarly, we can see the slot here on the Mercedes, highlighted in yellow. 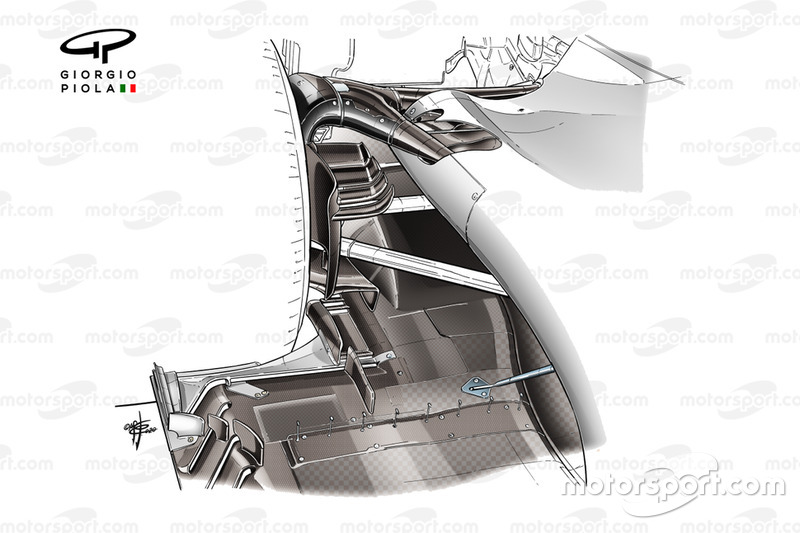 Haas made a concerted effort for 2020 with this region of the car in order to solve some of its issues and increase downforce. The slots added in the floor ahead and to the side of the diffuser will not be possible in 2021.