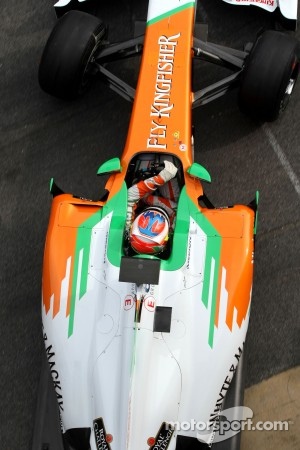 11 March 2011 - The Force India F1 Team brought its pre-season testing programme to an end with a fourth day of testing at the Circuit de Catalunya, Spain. Race drivers Adrian Sutil and Paul di Resta split the day and covered a full race distance between them, working on gathering further information on the new aerodynamic upgrades and performance-related items.

Adrian covered 26 laps in the morning and Paul 42 in the afternoon, taking the team's total mileage for this test to over 1,600km.

The team will now return to its UK base for a quick turnaround to prepare for the Australian Grand Prix, which will take place in just over two weeks' time.

Adrian Sutil
Twenty six laps for me today, working on getting more information on the new aero parts we introduced yesterday. We wanted to do a qualifying sim as we missed this yesterday but in the end we only managed one run on the soft tyres as we had some set-up changes that took a bit longer than expected. It gave us an idea of where to go, but unfortunately we ran out of time to do a run on the supersoft, which ultimately would have put us further up the final classification. We've identified some areas we can improve on the car and a general direction so we're going to concentrate on this between now and Melbourne.

Paul di Resta
I got a chance to get back in the car this afternoon for my final laps before the Australian Grand Prix. We got some reasonable running and tested part of the aero upgrade package for the start of the season. We've still got some fine-tuning to do for Melbourne so we'll go back to the factory to work on this. It's been a really useful time for me, I've learnt what we need to focus on so I'll spend the time between now and the first race making sure we're running to our full capabilities to be fully ready for my Grand Prix debut.

Dominic Harlow, circuit engineering director
Both Adrian and Paul shared the driving in the VJM04 today in order to complete their respective programmes. We continued to look at some aerodynamic test items as well as further set-up changes. Both proved useful and we head to Australia with over 5,500km covered during the pre-season testing. As ever there is more to do to improve the performance of the car and there will be some further developments for the first race. Our reliability over the race distances here has been good and we've collected a lot of data on the tyre performance that we feel will be useful as we prepare our race strategies at the coming events.

Red Bull: Masi's F1 grid swap offer like something from the "souk"