Bangaluru, April 12 2011: The Force India Formula One Team, India's first and only F1 team, launches an exciting new project today, the 'Force India F1 Team Academy' (FIF1A) - an initiative aimed at identifying racing talent in India for young Indians aspiring to a serious, professional career in motorsport, both on and off the track. 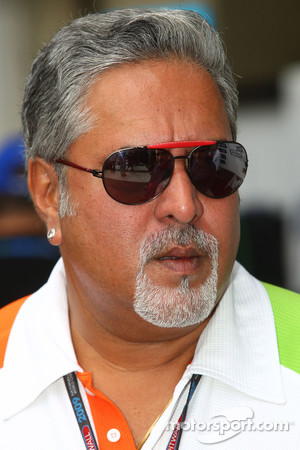 FIF1A has been set up as a separate, not-for-profit entity and will devote itself to three key areas: - Racing talent - identifying and nurturing race-driving talent in India - Vocational training - providing vocational training to Indians with natural aptitude in a range of disciplines used in careers within motorsport - Academic programmes - providing access to specialised academic programmes related to the field of motorsport for gifted individuals

The setting up of the Force India F1 Team Academy is a historic milestone in the sports arena in India. It marks the first time that anyone has ever embarked on such an ambitious programme in India. Our goal is to create a pool of talent and groom aspirants who show exceptional promise by providing them with the necessary corporate funding and support. Our programmes will provide a clear professional career path in motorsport so that one day our selected candidates are able to represent India in the international arena and hopefully bring glory to the nation.

"Hunt for 1 from a Billion"


In its first year, the Academy's predominant focus will be on unearthing and discovering racing talent, while the initiatives in the other two areas will be rolled out in a phased manner over the following 18 to 24 months. "Hunt for 1 from a Billion" is a grassroots initiative, and will provide children between the ages of 14 and 17 with the opportunity to time trial a kart at one of seven selected locations across India. FIF1A plans to run the second "Hunt for 1 from a Billion" in 2013. Commencing April 25, 2011, FIF1A will be operating a comprehensive three-stage programme comprising the following phases:

- Regional Trials
Held at seven locations across India where thousands of aspirants will be able to practise karting at subsidised rates and participate in selection rounds spread over a week in each city. 14 finalists will then be selected from each city based on the 14 highest times set and go on to compete at the National Finals.

- National Finals
100 finalists (14 from each of the seven locations and two 'wild card' entries who showed promise but did not record a time within the top 14) will compete at a location in India during September 2011 to win a place among ten finalists who then move on to the UK Silverstone Finale.

- Silverstone Finale
Ten finalists from the National Finals will progress to a week-long intensive stint at Silverstone Circuit in the UK comprising sessions on driver tuition on Dmax Karts; a day at the Porsche Human Performance Centre to assess and develop fitness for motorsports; media training with Goodman Media; two full days at the Silverstone F1 circuit with sessions on safety, car control training, driver assessment and race procedure briefing. The ten selected drivers will complete their Silverstone experience with a race in Formula Silverstone cars. At the end of the intensive hands-on week, planned for October 2011, an expert panel will pick three finalists on the basis of a holistic assessment of their multiple capabilities and proficiency in requisite areas. The three winners will be announced at the Grand Prix of India, 28-30 October 2011.


The three winners from the Silverstone Finale will be groomed as follows in 2012 and beyond:

Following this, and dependent on the nature of talent, a career path will be drawn out for the ultimate winner. The selected winner will be fully supported by the Academy and groomed over the coming period leading up to a point where the aspirant is qualified and ready to apply for a super licence from the FIA to drive in Formula 1. Potentially, the winner will have the option of being considered by any F1 team, including Force India Formula One.

The Force India F1 Team Academy was conceived with a vision to inspire young Indians who have talent but have so far had no proper opportunity or serious platform to showcase their innate abilities. I hope that this Academy will give young Indians, who have the necessary passion and drive, a serious chance to show promise and an opportunity to excel, so that we can develop their talent and grow it by channelling it properly over the long-term. If the Academy is able to place even one Indian on the F1 grid, then all the effort would have been worthwhile. I would like to thank our partners ExxonMobil for sharing our vision as together we groom future world champions and support them on every step of the long and winding journey that will ultimately prepare them for the rigours and demands of F1.

We are delighted to have broadened our Formula 1 involvement with the launch of Force India Formula One Team Academy. Our partnership with the Force India Formula One Team Academy reaffirms our commitment to supporting the sport of Formula 1 world-wide. We would like to thank Dr.Vijay Mallya for this great opportunity, we are working closely with him and are looking forward to play an important part in giving aspiring Formula 1 drivers a chance to achieve their dreams; inspire others to dream big, and go on to be the best of the best.

ExxonMobil is a leading marketer of finished lubricants, asphalts, and speciality products, as well as the world's number one supplier of lubricant base stocks. ExxonMobil's brands are sold around the world. Mobil 1 is at the forefront of these brands. Major car and industrial equipment manufacturers use these products to deliver technically superior products that protect their customer's engines and machinery, enabling peak performance while improving energy efficiency. Our dedicated global organisation and strong distribution network is focused on delivering a reliable supply of high-quality lubricants, and providing technical application expertise to customers around the world (including India) For more details visit www.exxonmobil.com.

Exceeding standards for fully synthetic oil, Mobil 1's global formulation for synthetic oil exceeds the latest oil standards of vehicle manufacturers and oil industry. Mobil 1 features anti-wear technology that provides performance beyond conventional motor oils. This technology allows Mobil 1 to meet or exceed the toughest standards of car builders and to provide exceptional protection against engine wear, under normal or even some of the most extreme conditions. Mobil 1 flows quickly in extreme temperatures to protect critical engine parts and is designed to maximise engine performance and help extend engine life. Mobil 1 0W-40 is approved against Mercedes-Benz's demanding 229.5 specifications. For more details visit www.mobil1.co.in

Virgin must speed up to stay ahead of HRT - Glock